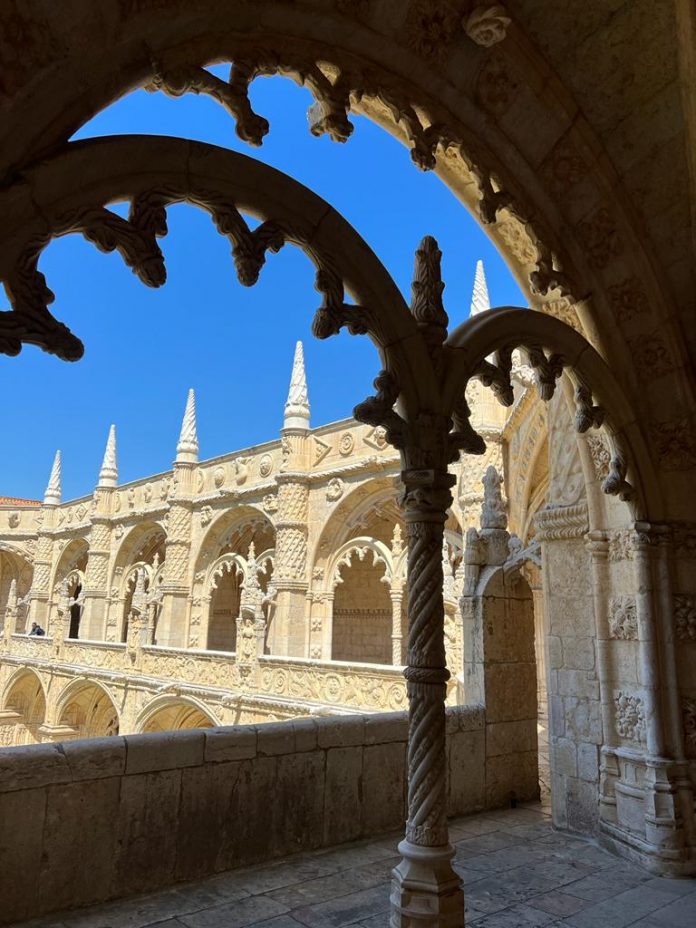 LISBON; MARITIME CITY: It was late spring when I finally got to visit Lisbon, the historic capital of Portugal. Fitting for a land of maritime adventure, Lisbon is filled with charming homages to the sea.

From pavements that replicate waves to statues and monuments that celebrate the sea, the influence of maritime life and what it meant to Lisbon is apparent everywhere.

Since it was a short trip, I saw just some of Lisbon’s most famous landmarks. 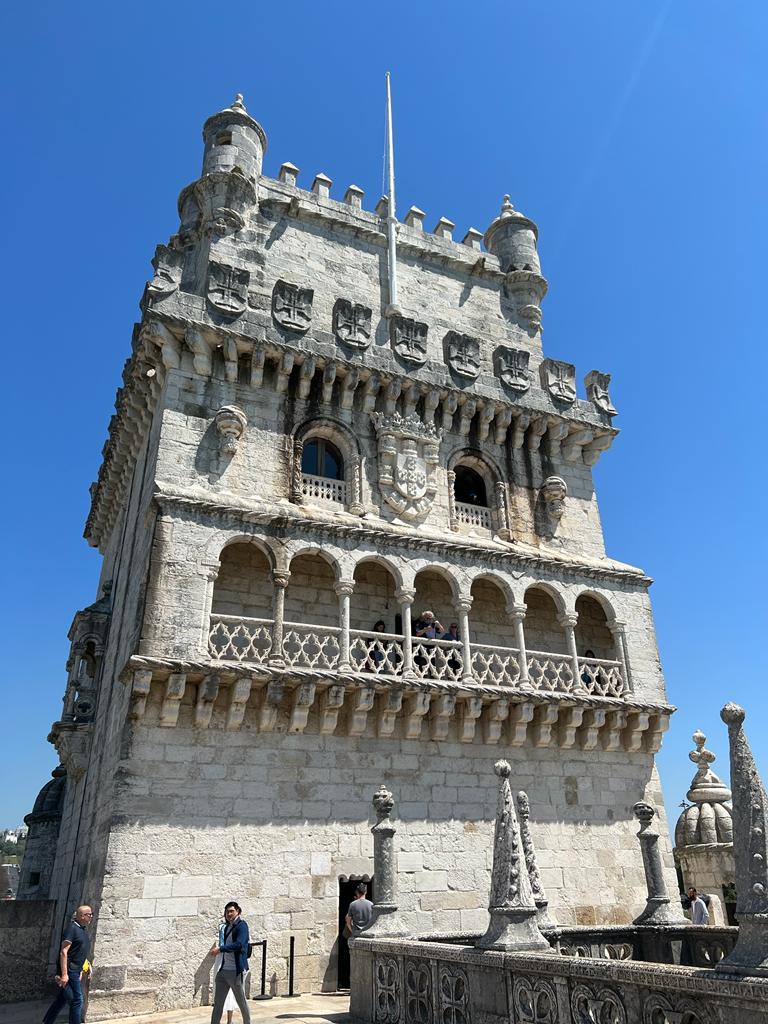 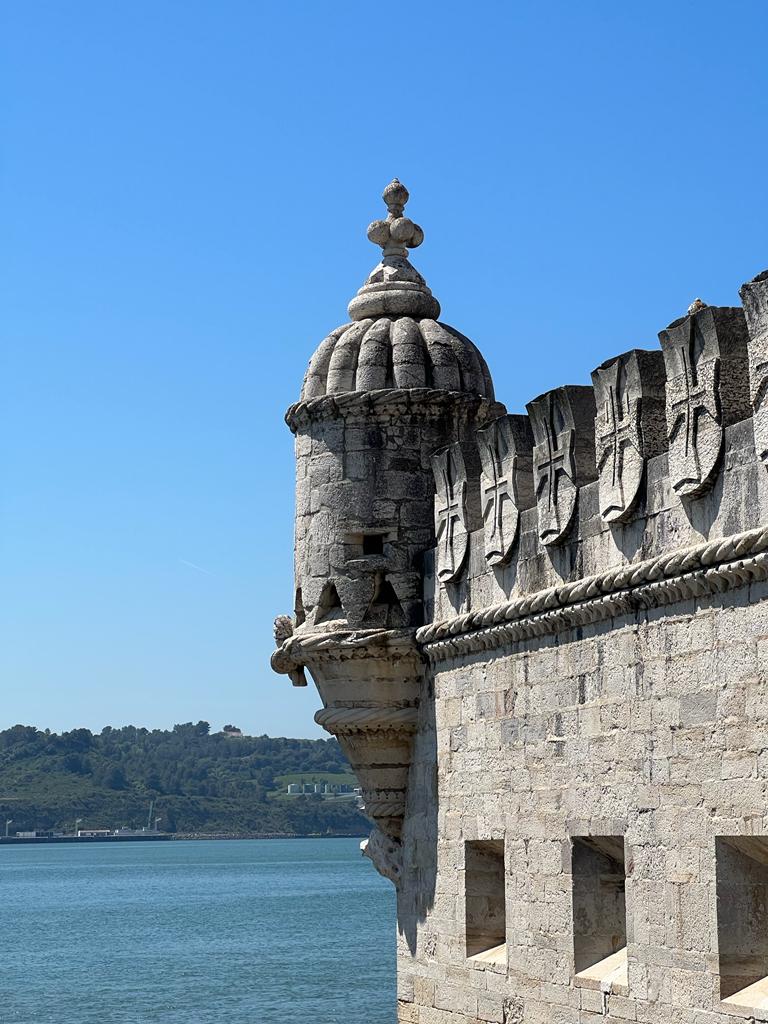 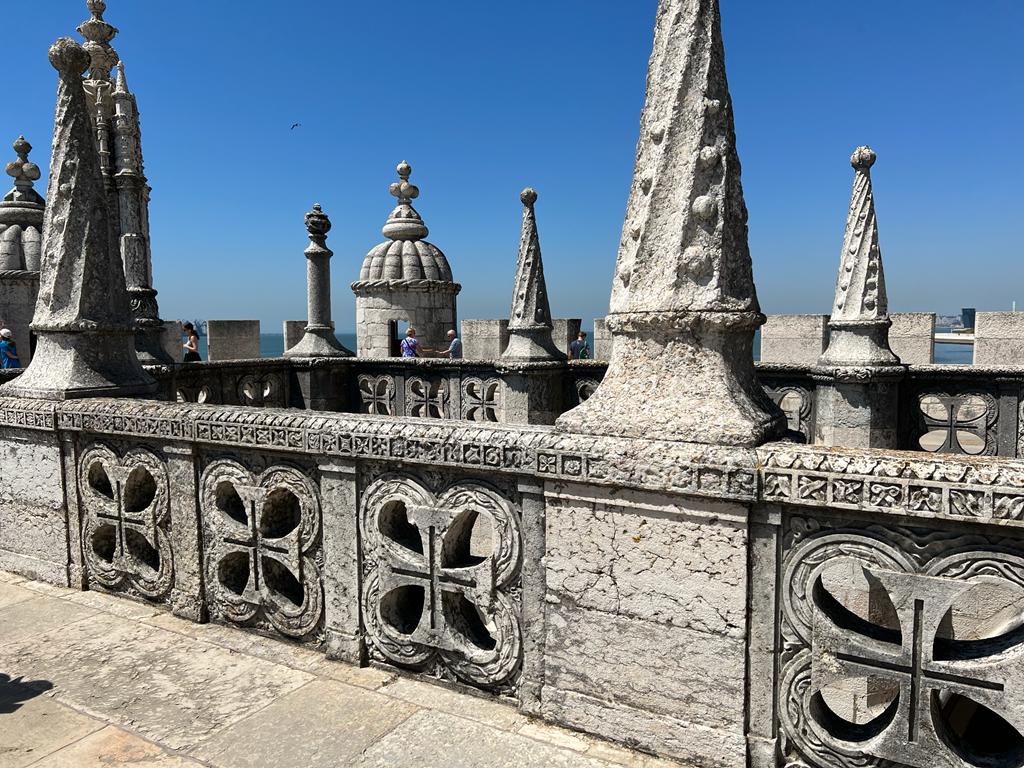 We began our tour at the Belem Tower. Built in the 16th century, this was considered the ceremonial gateway to the city of Lisbon. Its official name is the Tower of Saint Vincent, and it holds a majestic sway over the port, constructed in the Portuguese Manueline or late gothic style. The Manueline style incorporates maritime motifs and representations of the age of discovery in Portugal, with carved motifs and traceries everywhere. 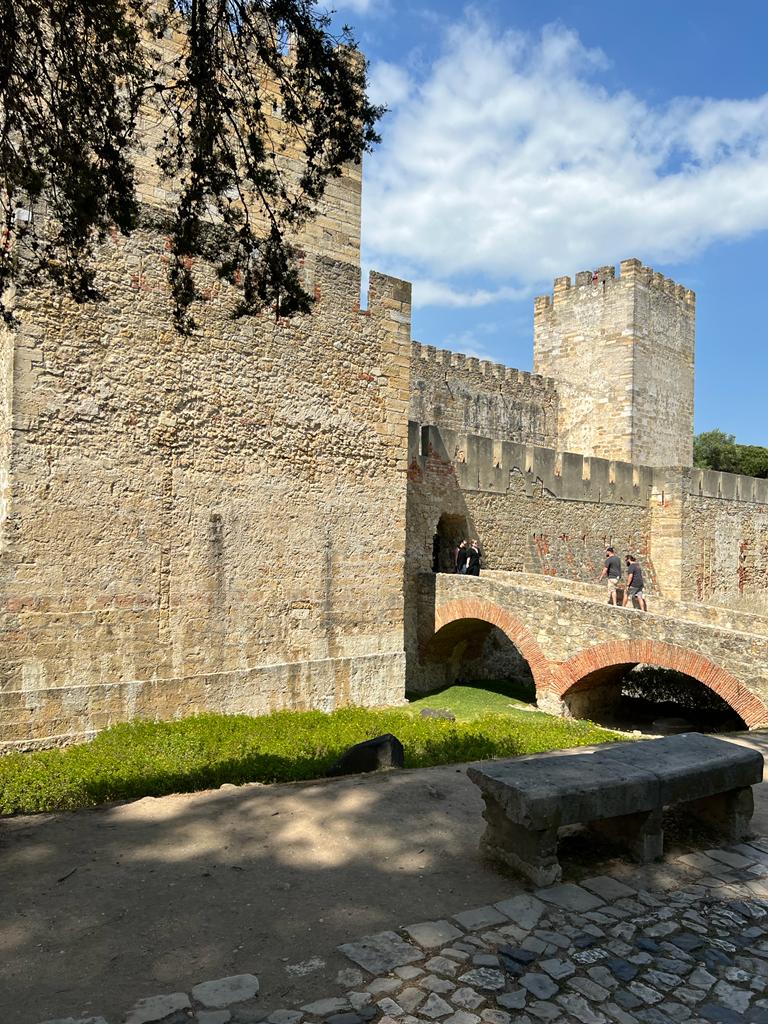 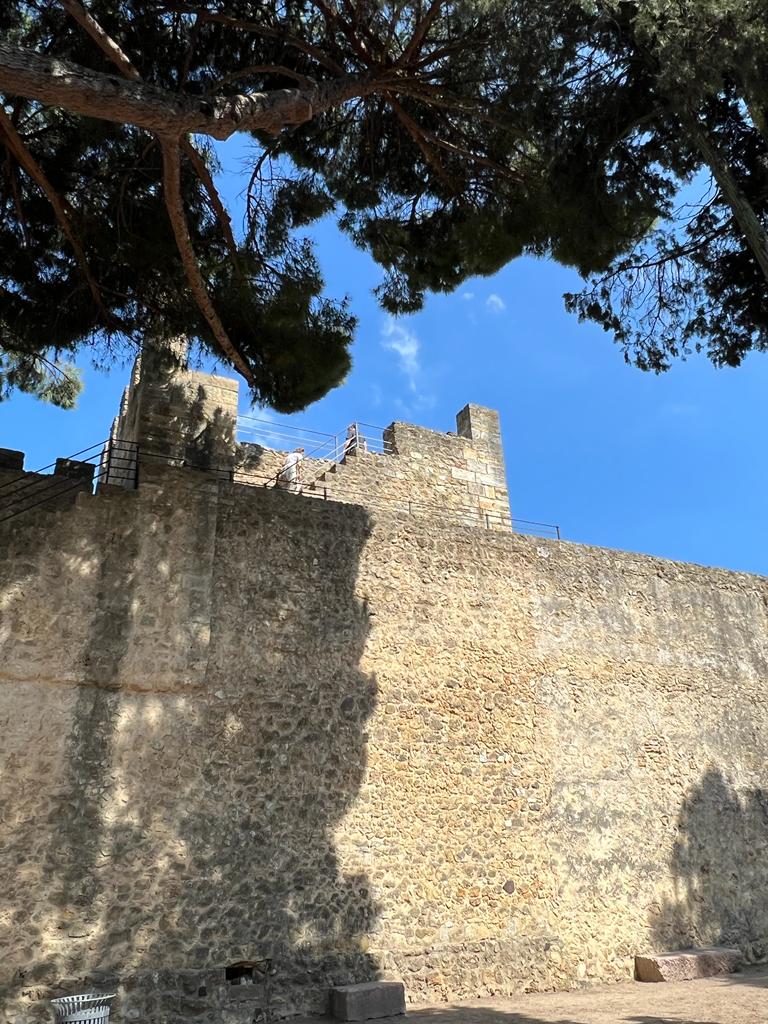 Next up was the Castelo de S. Jorge! A historic castle with a storied past, this site was occupied by many nationalities, including the Romans, Phoenicians and Greeks, with fortifications also added by the Moors in the 10th century. 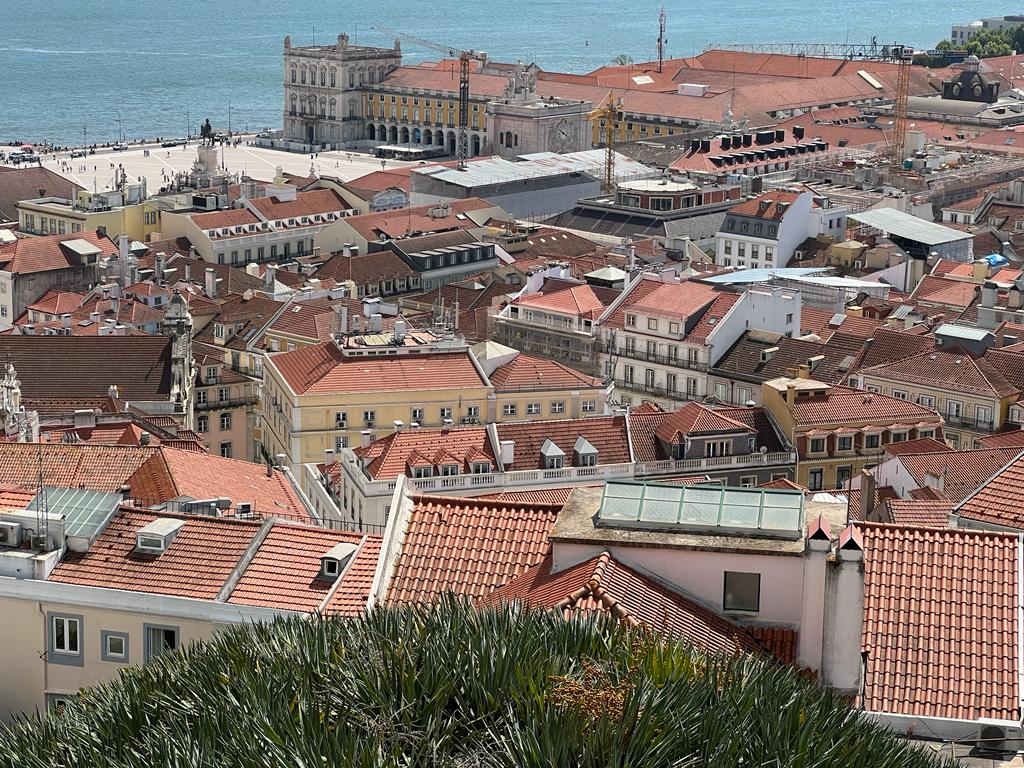 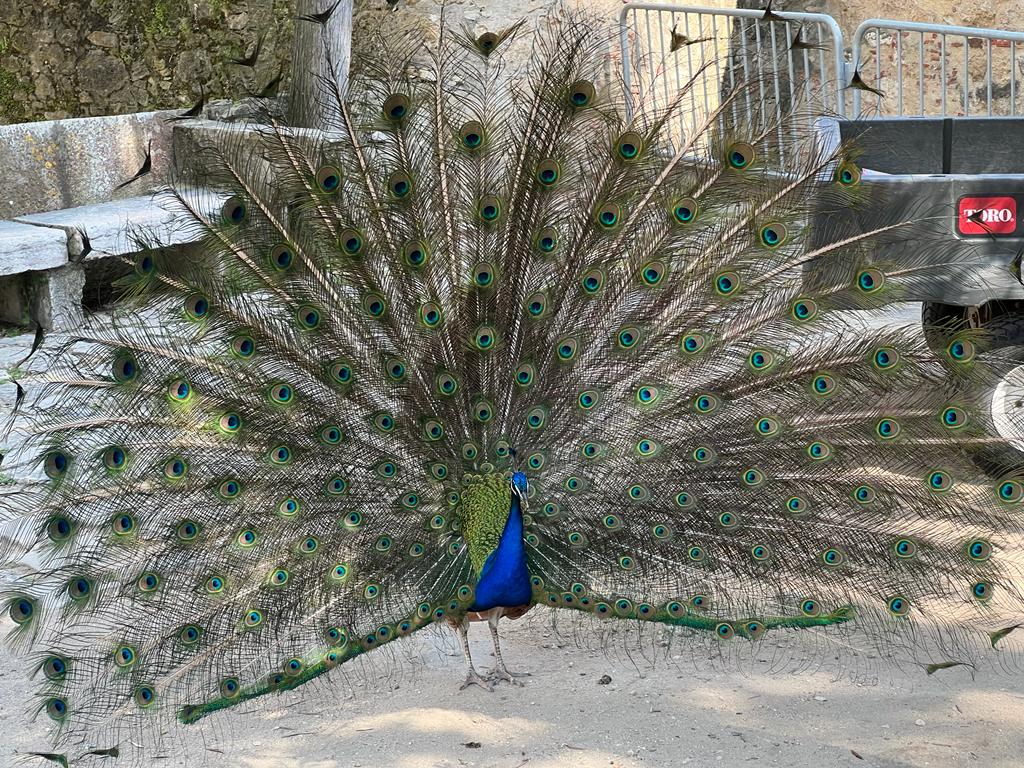 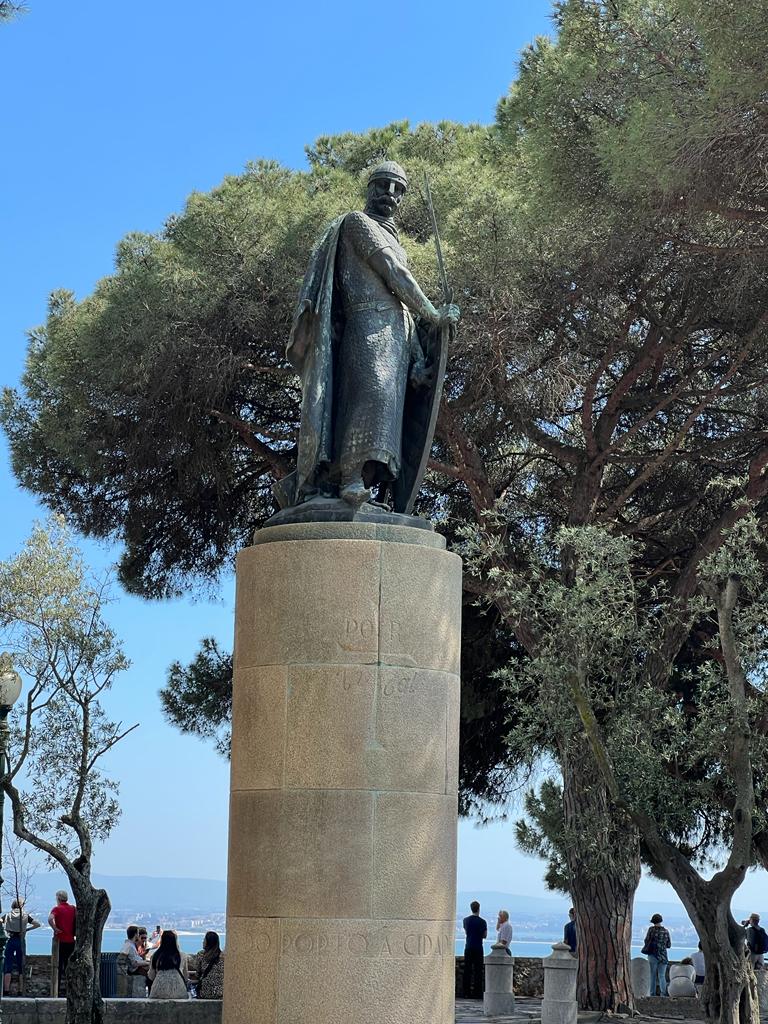 Its encircled by a moat and enjoys a commanding position on a hill overlooking the city of Lisbon. It is an impressive rectangular building with 10 imposing crenellated towers. Over the centuries, it’s been used as a royal residence as well as military headquarters and is now a museum. 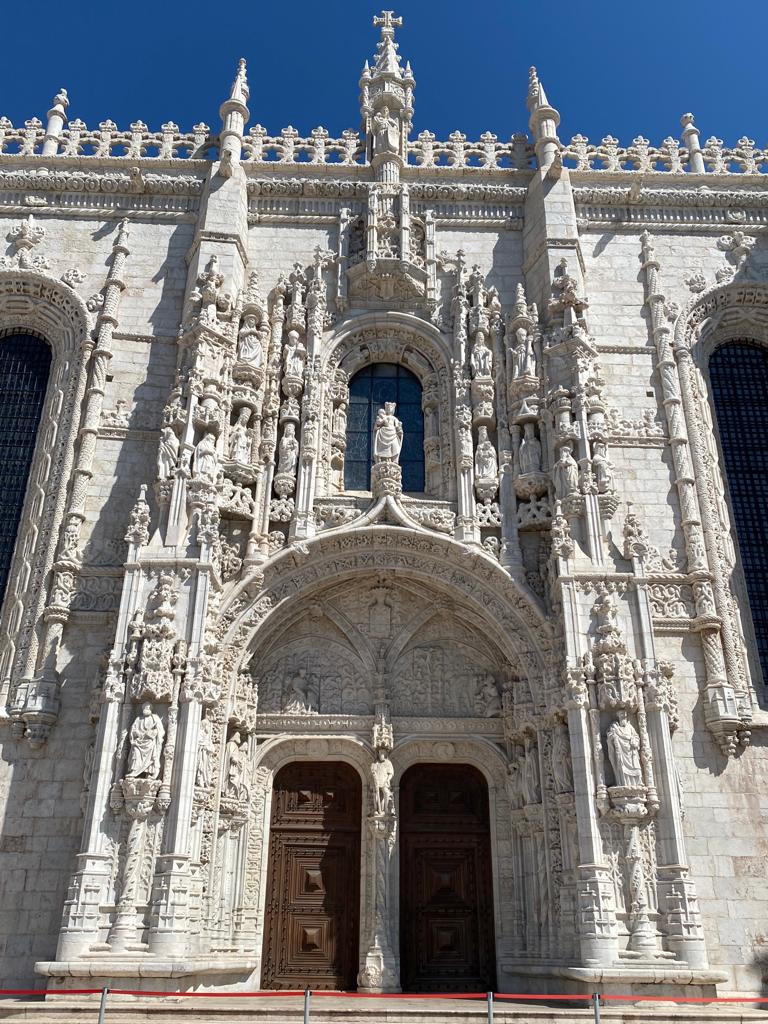 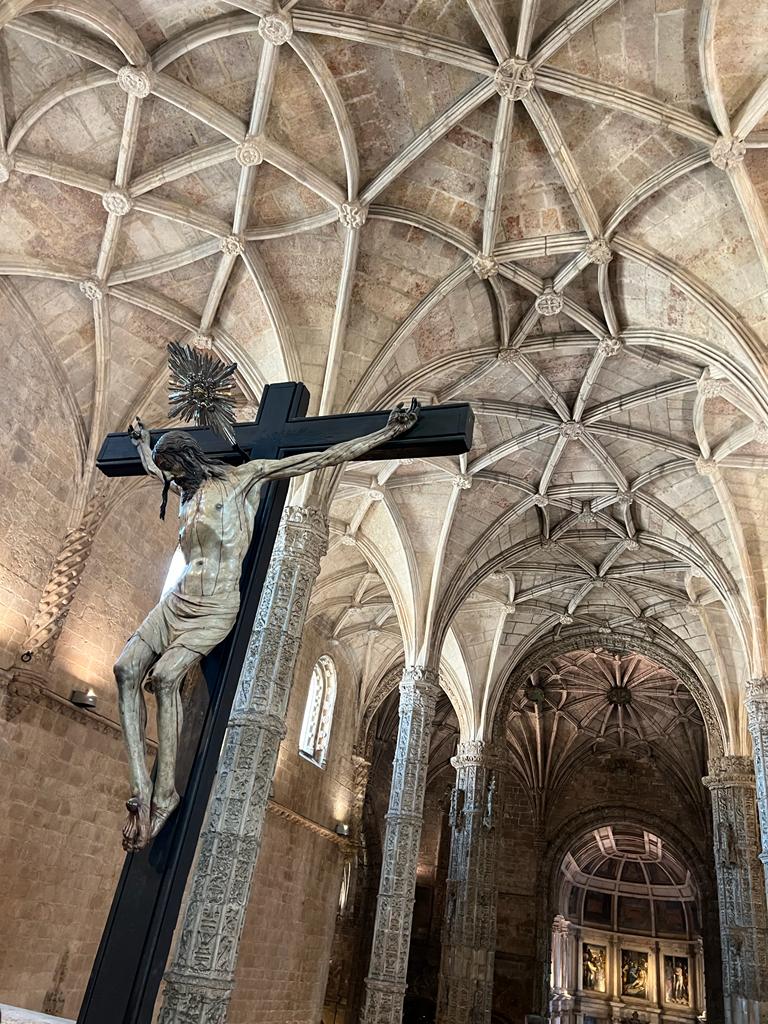 Built in the 1500s, the monastery is another prominent example of the Manueline style of Portuguese architecture. It was constructed on the Tagus River, near the point of departure of Vasco de Gama’s first expedition to India and he was also later buried here as well as much of the royal family of the time. 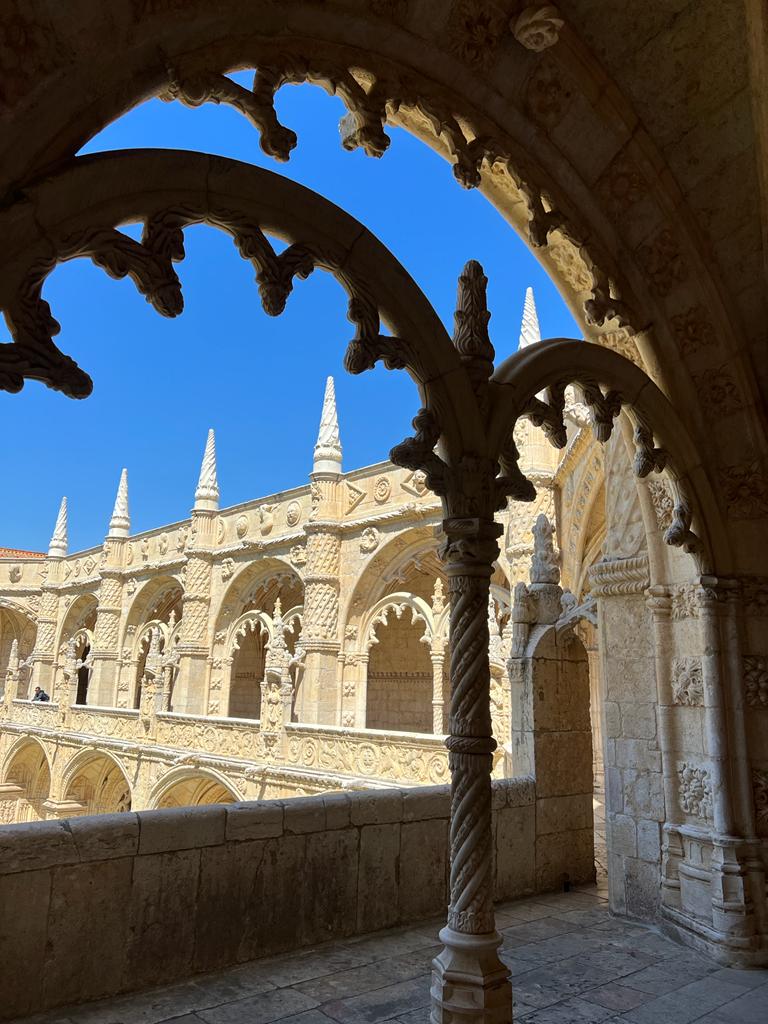 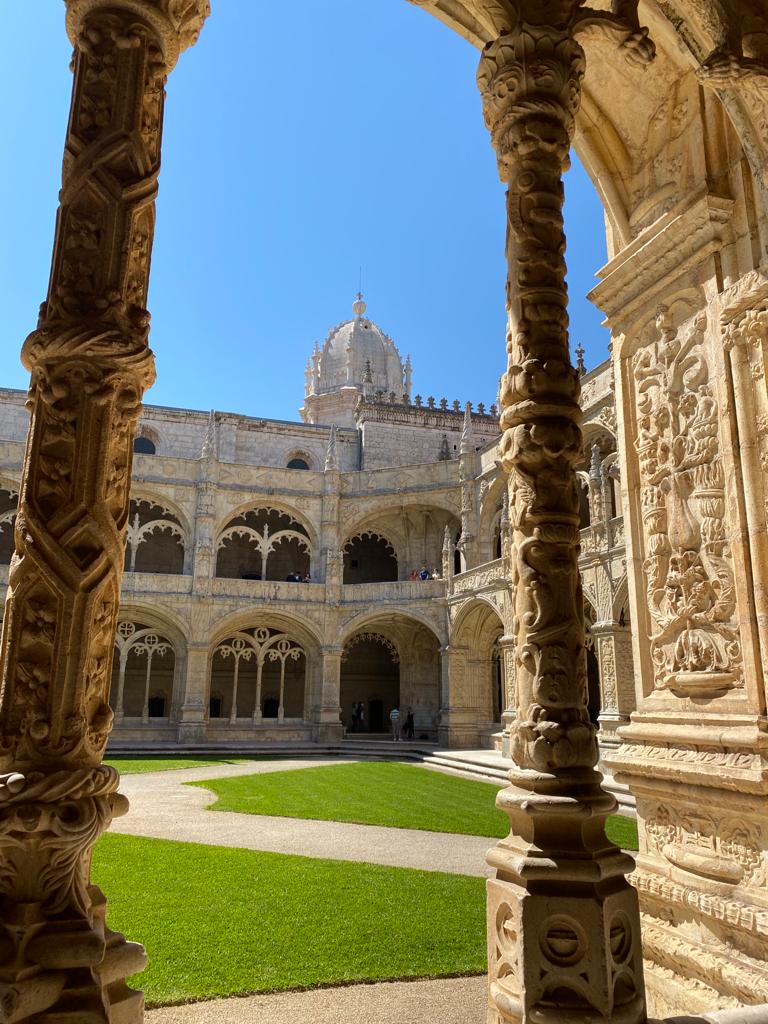 The ornate cloisters are decorated with columns carved in the form of sea monsters, corals and other nautical symbols, creating a unique building for visitors. You can spend hours just discovering little nooks and corners with fascinating sculptures and architectural details. 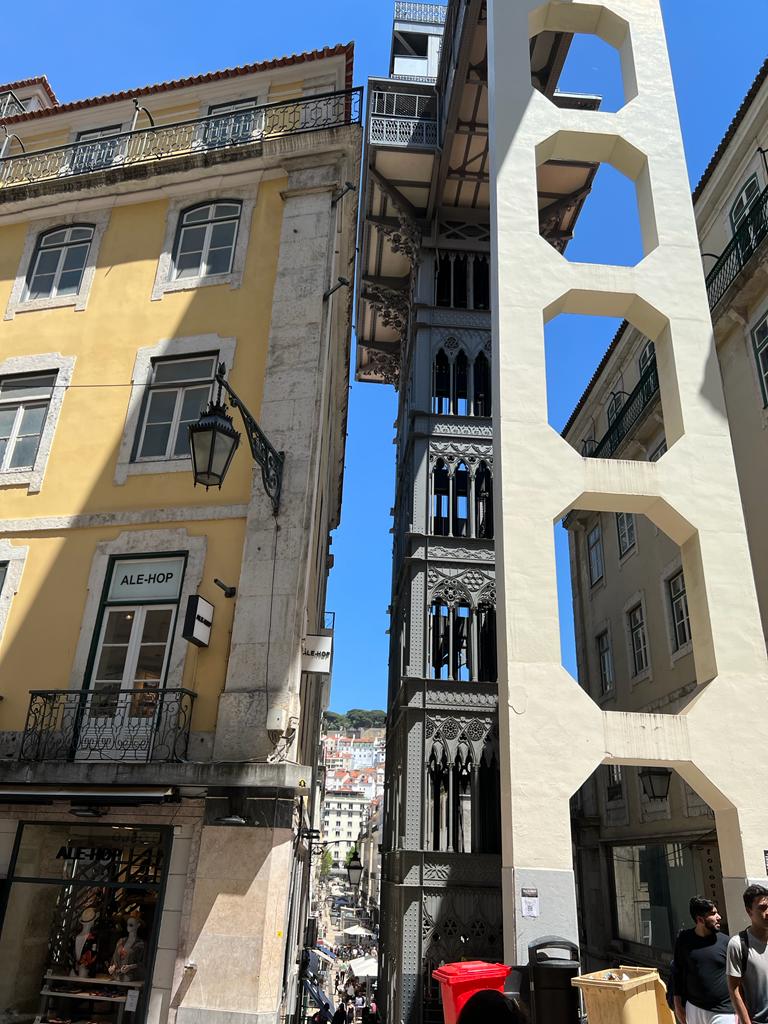 This elevator is a vertical structure that connects the lower levels of the Rua Santa Justa to Carmo Square. Inaugurated in 1901, it consists of a metal tower, observation platform and walkways to help tourists navigate the hilly city. Seven stories high, the lift includes two elevator cabins with a capacity for 24 passengers. You can enjoy delightful views over the city as you ascend. 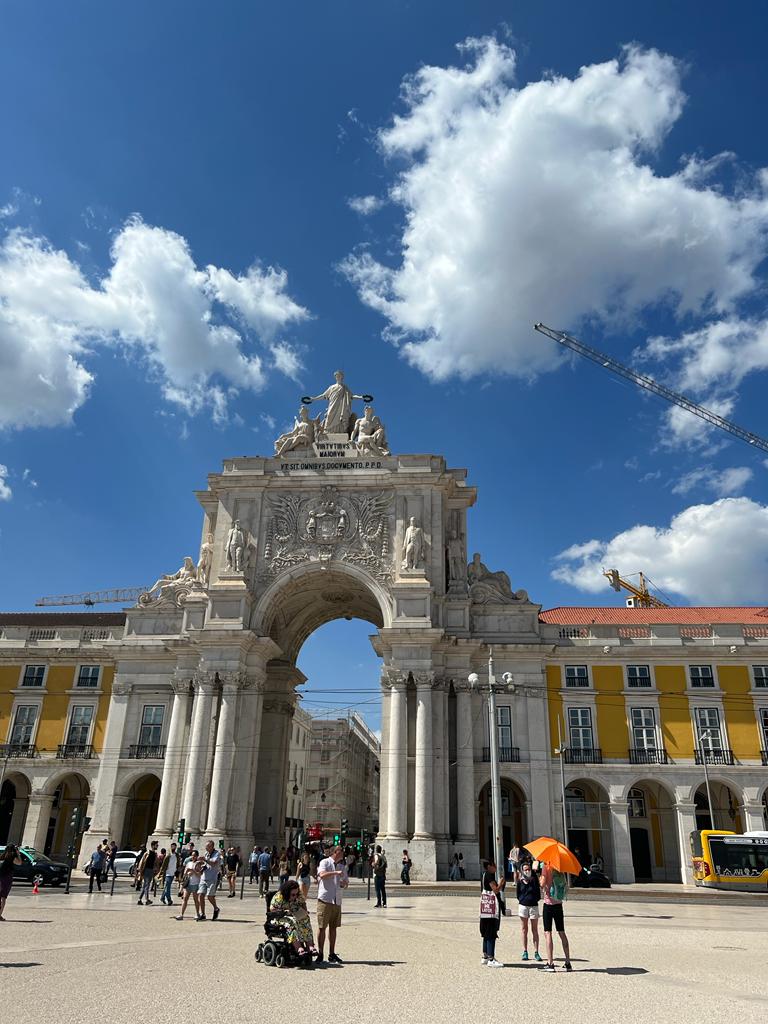 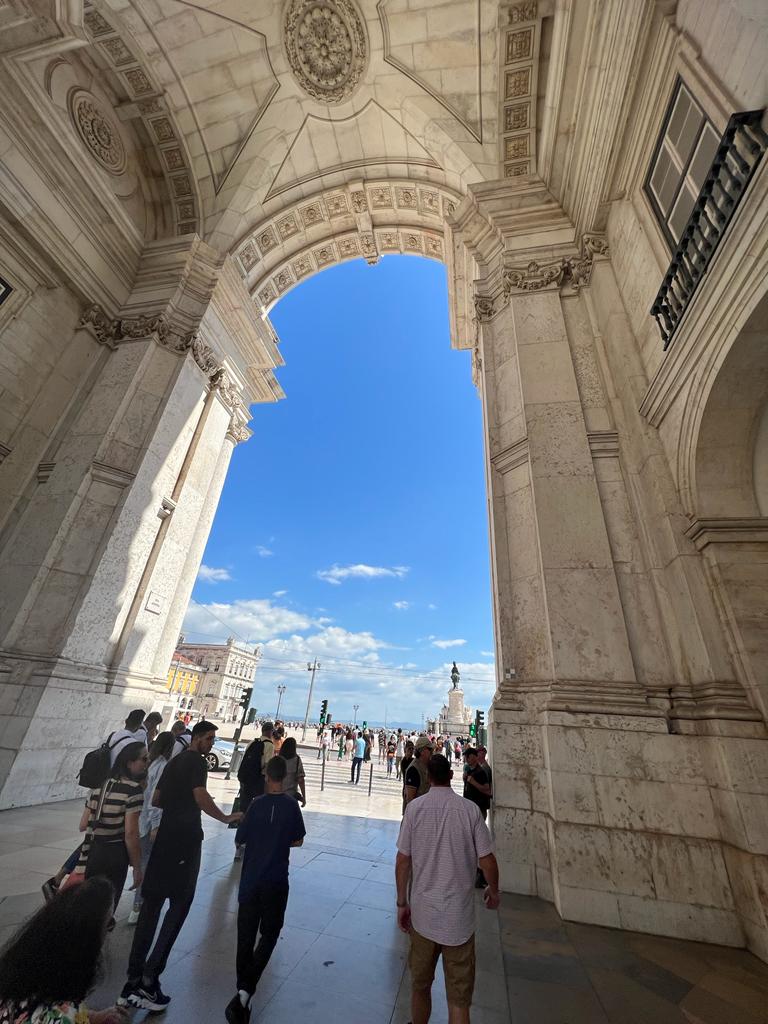 The Praça do Comércio is one of the largest squares in the city of Lisbon and faces the harbour. Initially, it was surrounded by government buildings and was dedicated to celebrating commercial activity and contained statues of important personages. These included King Jose I (1775) as well as a triumphal arch. Now it houses the museum of Lisbon and is a great place to steep yourself in Portuguese history. 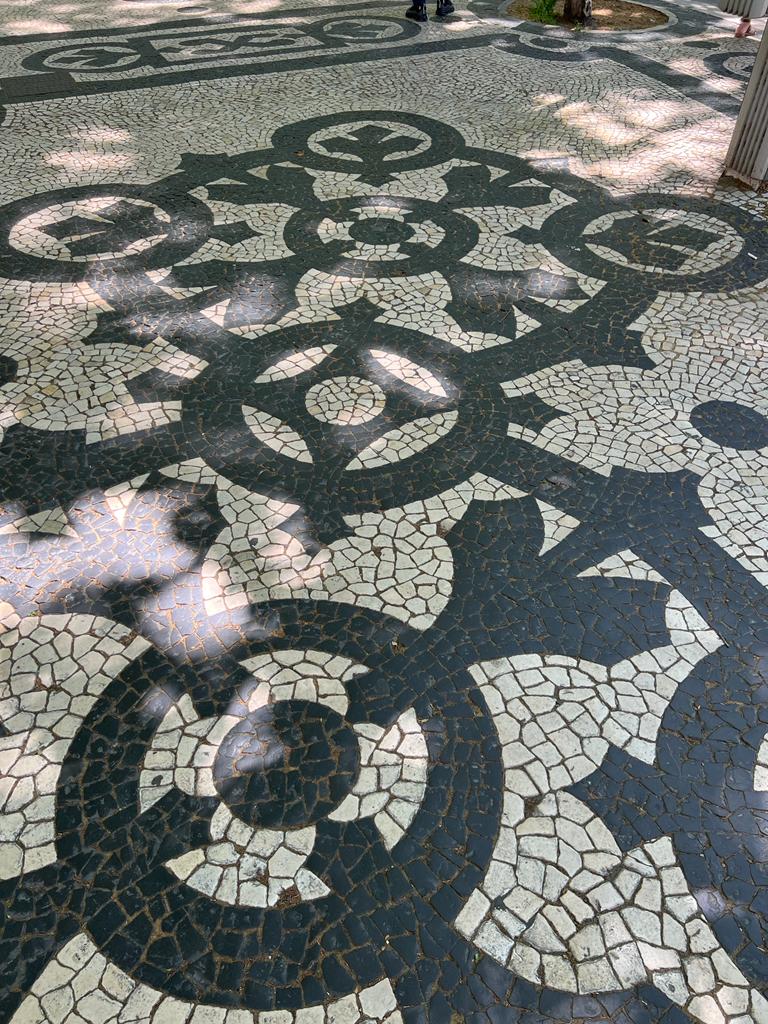 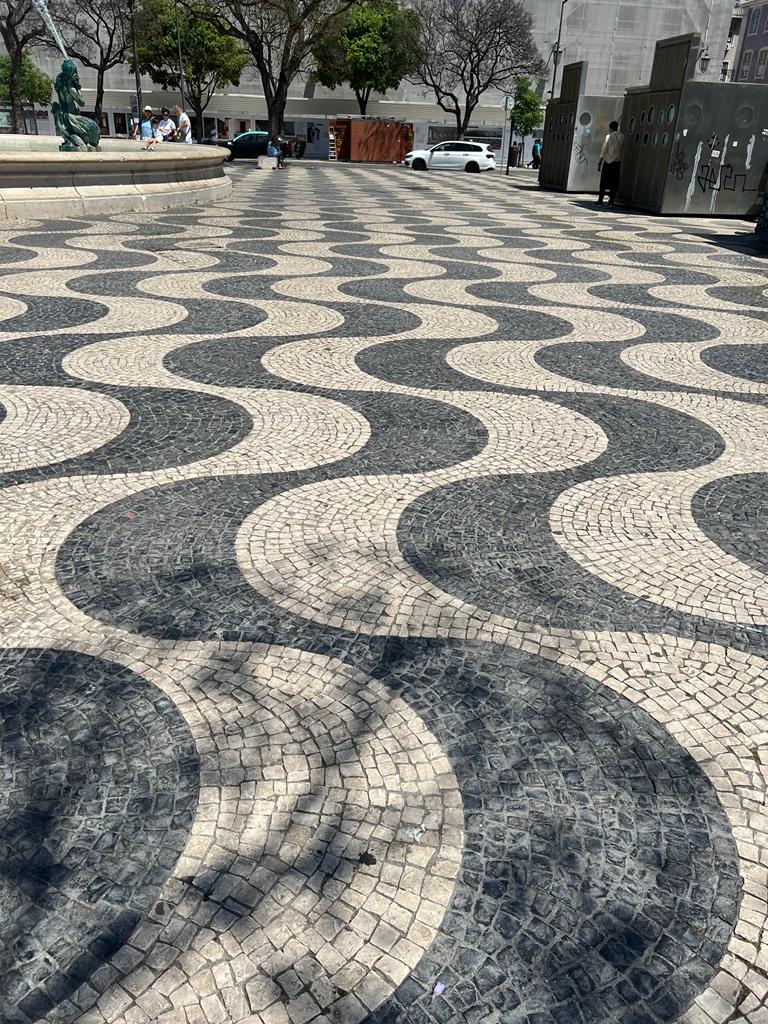 This is the popular name of King Pedro IV Square, placed right in the centre of the city. I was fascinated with the mosaic flooring that flows across the square in wave-like patterns added in the 19th century. The square has been an important meeting place for the people of Lisbon for centuries and continues to be a vibrant city landmark.

Lisbon has so much to offer the visitor: great food, friendly people, also amazing art and architecture. I am determined to return and discover more of this beautiful country, including the coastal areas.

Casual and Creative Decor in a Karachi Home

Zahra Chughtai - August 7, 2022 0
This vegetarian chilli recipe is a winner! Since two of my daughters turned vegetarian, I am always scouring recipes and looking for vegetable friendly...

Casual and Creative Decor in a Karachi Home