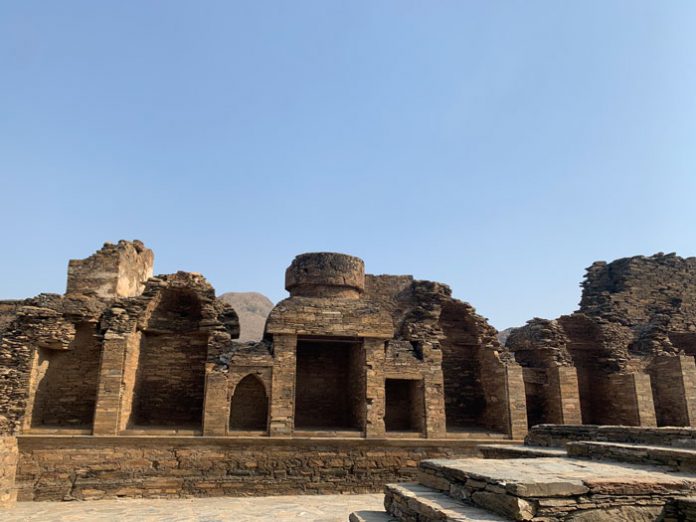 Pakistan is a land of  antiquity where great civilisations have flourished; kings and conquerors have ruled, holy men have spread their message and devotees and artists have created some of the most magnificent art the world has seen. Recently, a small group of us set out on a short archaeological trip up country. Making Islamabad our base, we took day trips to the historic cities of Taxila and Mardan in the Khyber Pakhtunkhwa province.

The crisp winter chill in the air was invigorating and perfect for embarking on this journey into the past. Taxila is about an hour’s drive from Islamabad and Taxila museum is a small gem which can hold its own amongst the world’s best.

Built by the British, the small colonial style stone structure is adorned with graceful arches and Corinthian columns. Taxila, meaning ‘hewn of stone’ is famed for its stone carvings and the Hellenestic influenced Gandhara style of sculpture flourished here. The museum boasts a magnificent Gandhara collection with stunning relief panels, Buddha statues, heads and more excavated from the ancient sites in the area. 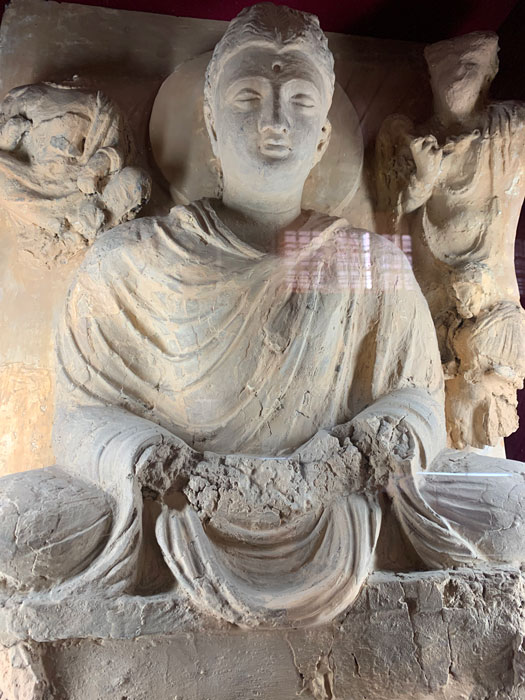 The panels depict various scenes from the life of Buddha, his birth, his ascension to enlightenment and more. I was particularly struck by a panel featuring women disciples clustered around the Buddha in aspects of prayer, confirming the inclusion of women in public and religious life.

The museum also houses an extensive collection of artefacts unearthed at the ancient city of Sirkap close by. Massive urns, dishes, tools, weapons and much more have helped historians paint a picture of life in 300 BC .

Sirkap was excavated by British archaeologist Sir John Marshall and his home is situated behind the museum. Surrounded by an orchard of orange trees and other magnificent trees over-run with creeping vines, the home is still furnished and maintained in its original style. 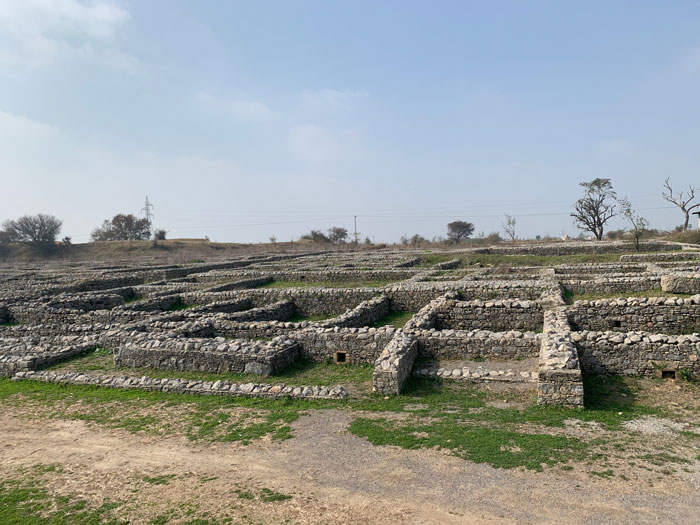 From the museum we set off for the actual site of Sirkap, just a few kilometres away. Sirkap was founded by the Greco-Bactrian king Demetrius around 180 BC. It was destroyed in an earthquake and later re-built by King Menander. The city is laid out on a grid in the Greek style with houses and shops in neat rows and is dotted with stupas and temples. The variety of religious and cultural influences found here is a strong reminder of our pluralistic history. 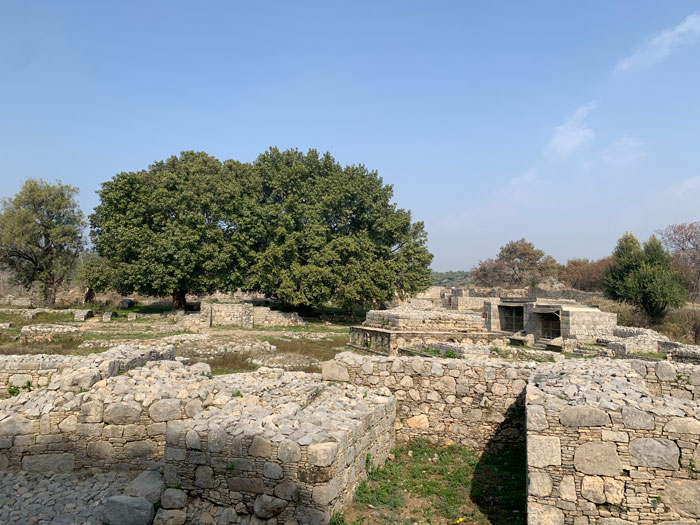 Sirkap was inhabited first by the Greeks and later the Buddhists. We saw remains of the  Hellenestic Sun Temple, which has a sundial carved into the ground.  Then there is the  Apsidal temple which boasts a very large circular central stupa surrounded by small chambers.  Particularly striking is the the double headed eagle stupa; the square structure which dominates the temple sports an eclectic mix of  influences from Corinthian columns to the double-headed eagle, a symbol of empire used  from Byzantium  to Russia and Germany. 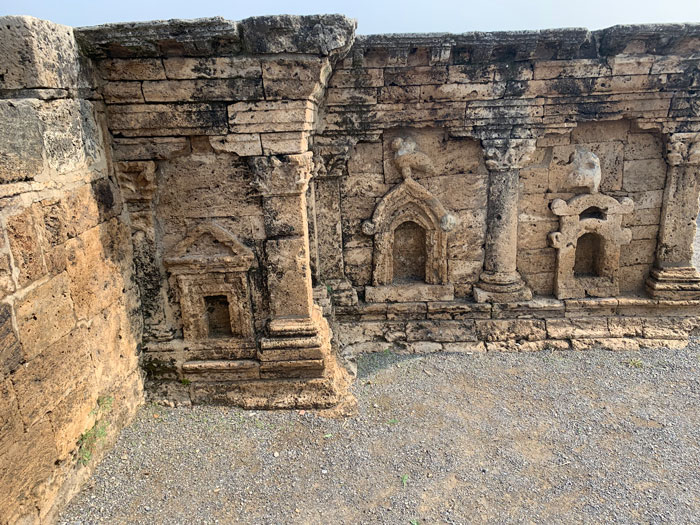 The Greek traveller Appolonius  records that Sirkap was also visited by St Thomas who was allowed to preach his message and even hold some babtisms here. Again, this is a powerful message of tolerance and pluralism that once prevailed here. In fact, Christian pilgrims still make their way to Sirkap in July to mark the visit of St Thomas.

In the Buddha’s Footsteps

From Sirkap it was on to the Dharmarajika stupa and monastery complex which is also close by. This second century complex was built by the Kushan kings who were devout Buddhists. 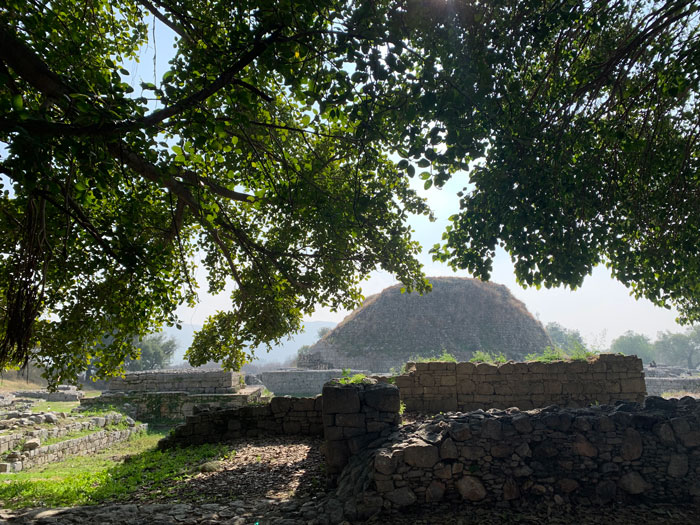 The short climb up to Dharmarajika opens onto a grassy flatland where the remains of the stupa rise to greet visitors. Although it is largely damaged, one can imagine how magnificent this structure once was, adorned with gandhara frescos on all sides and flanked by massive statues of the Buddha in various aspects. 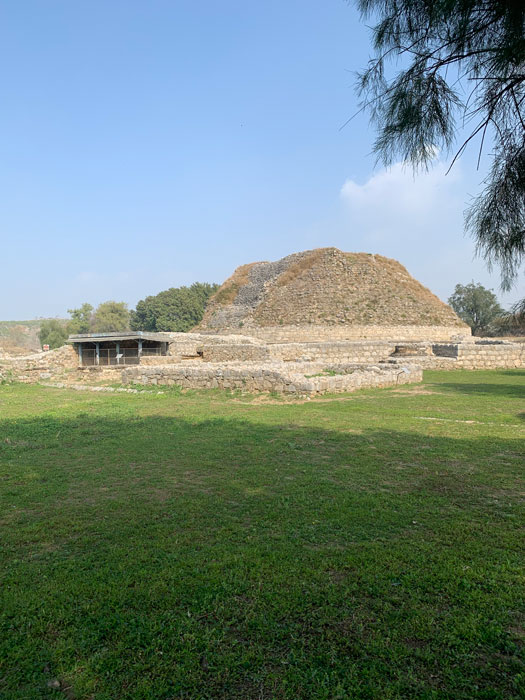 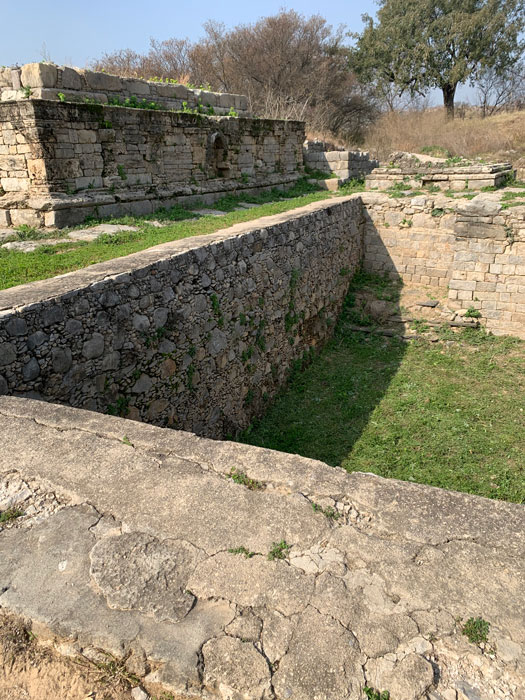 A fairly broad plinth runs around the stupa which was used by worshippers to circle the structure in prayer. Walking along this narrow platfrom, enjoying the gentle play of the breeze while soaking up the sun’s warmth, one is transported back in time. Dharmarajika hums with the humble devotion of centuries; there is a gentle stillness, a timelessness here which transcends race, religion and culture. It welcomes anyone who wants to step away from the world, even if only briefly.

The gracious old banyan trees on the perimeter of the monastery welcome visitors into their cool embrace and the rustling of their leaves is a lullaby. While sitting here, we were approached by locals selling souvenirs and replicas. We were amazed to learn that local farmers still unearth original coins and other small artefacts when ploughing their fields! 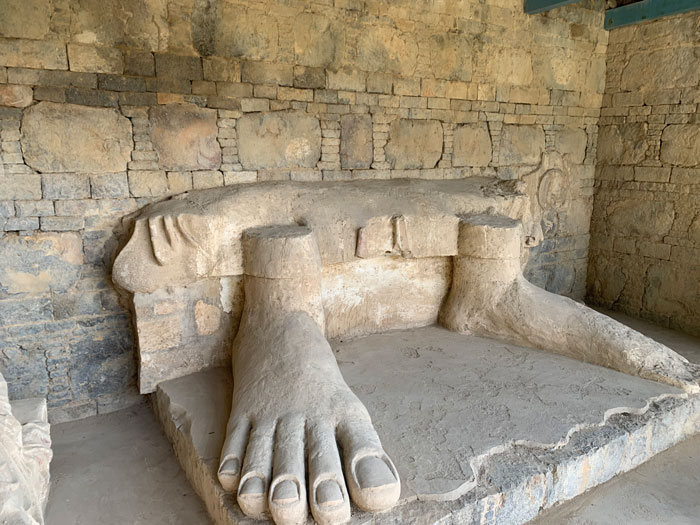 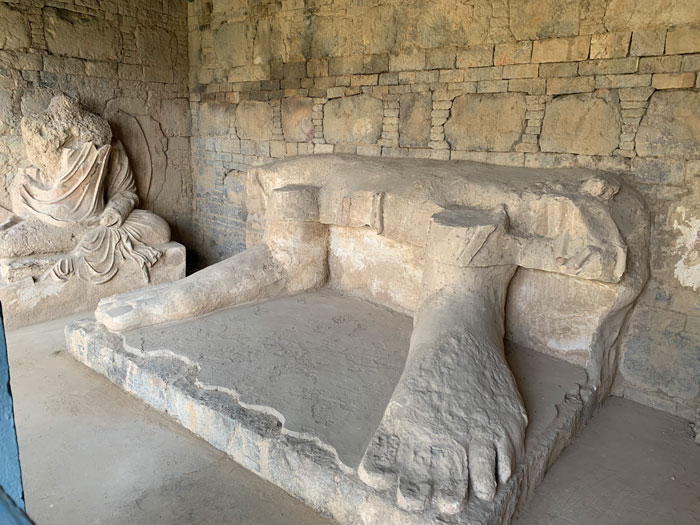 The main stupa is surrounded by smaller stupas and meditation chambers. There is also a pond which was used for ablution as well as other structures. Sadly, this thriving monastic order was destroyed by the white Huns who smashed many of the imposing statues and frescos here. A few surviving examples are displayed while others have been shifted to local museums.

Uplifted by our visit to Dharmarajika we called it a day. The next day would bring another journey into the past.

The next day we set off for Mardan. The  smooth motorway from Islamabad to Mardan was bordered with flaming fields of mustard in full bloom. Only nature can flaunt this eye-popping shade of yellow against green for mile upon mile. 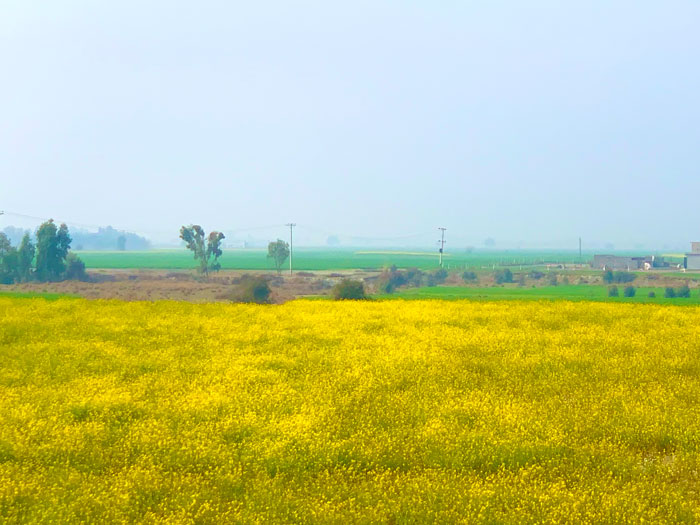 Mardan itself is a crowded, dusty little town with the usual higgeldy-piggeldy shops lining small streets which finally opened into a wide flat field. From here we climbed up to the magnificent monastery and stupa complex of Takht Bahi. 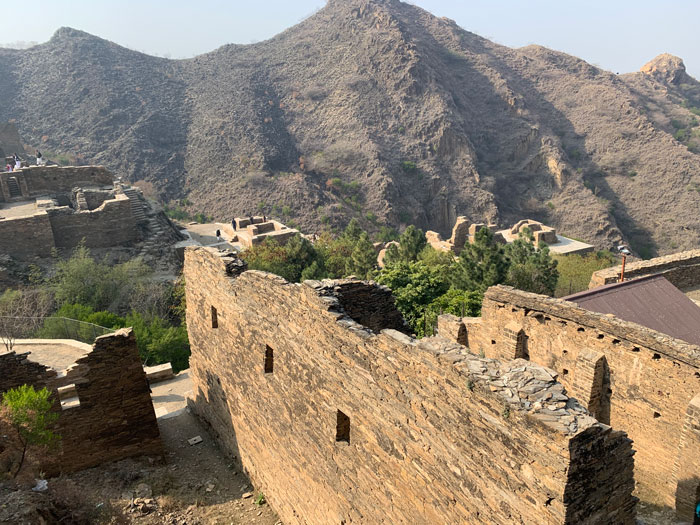 The scale is far grander than Dharmarajika and the remains are much better preserved, making this a truly impressive site. Broad comfortable steps, with benches at regular intervals, make the climb easy. As one ascends, the remains of the complex come into view, the high walls giving it a fort-like appearance. 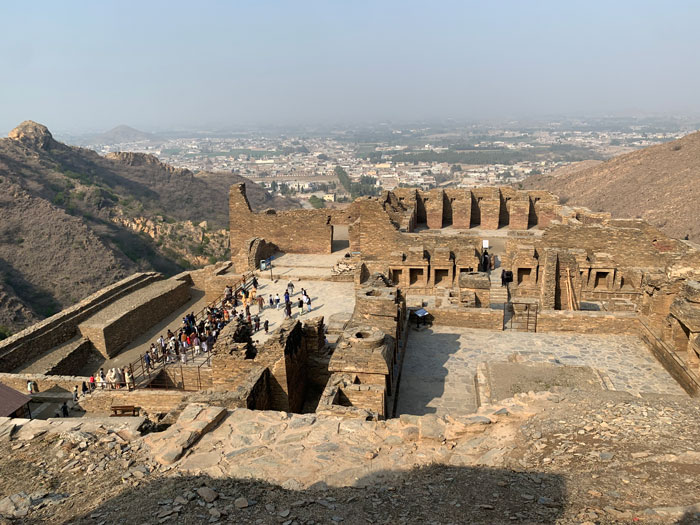 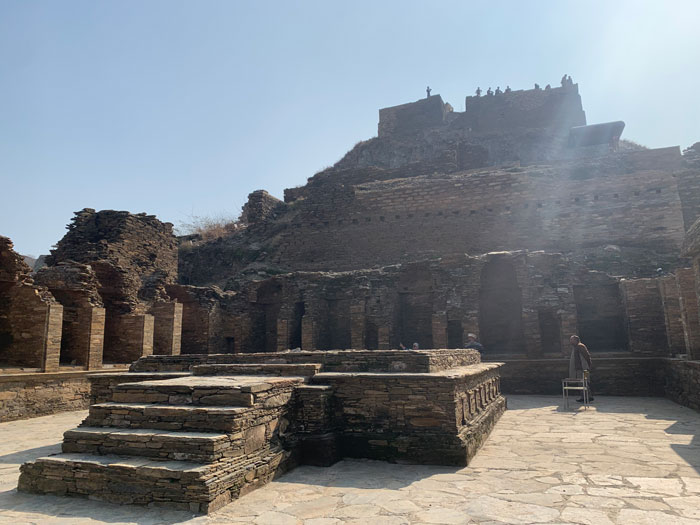 The monastery sits atop a hill which commands a sweeping view of the surrounding area. Our guide led us through the various courtyards, each with an imposing central stupa surrounded by alcoves which once housed statues of the Buddha. Frescoes depicting scenes from his life would have decorated the walls of the stupa. All the surving sculptures and stupas are now housed safely in the Peshawar museum. 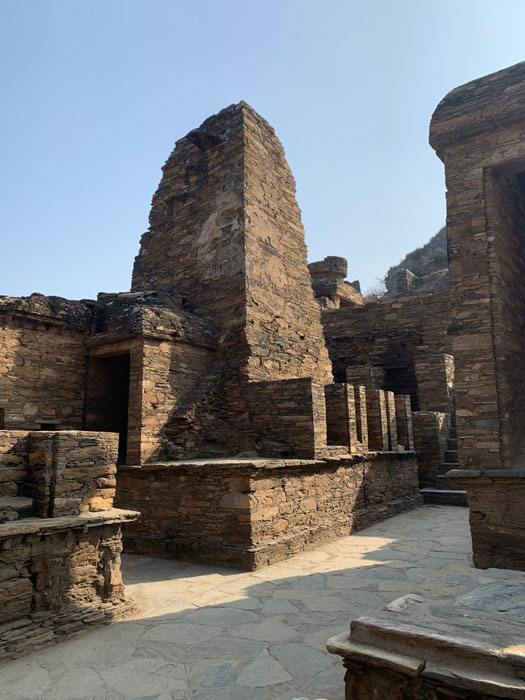 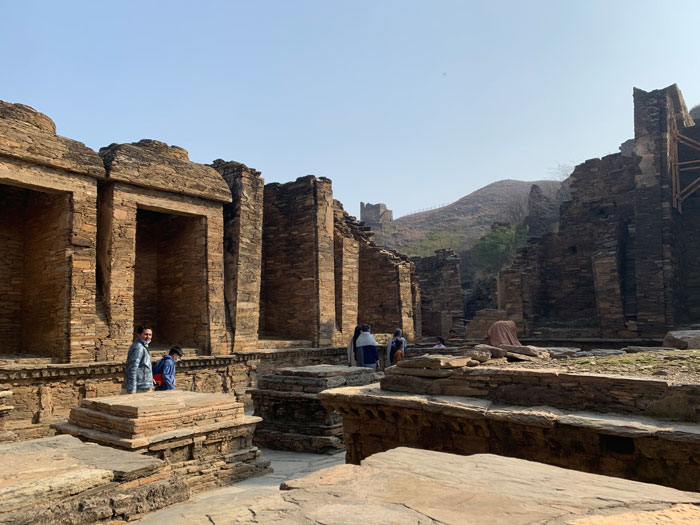 The largest stupa at Takht Bahi is said to have held a portion of the original ashes from the cremated body of the  Buddha, making this a site of great religious significance. Climbing further up, we found masons  at work, restoring rooms and building walls using the same ancient stone and plaster technique prevalent throughout the monastery. 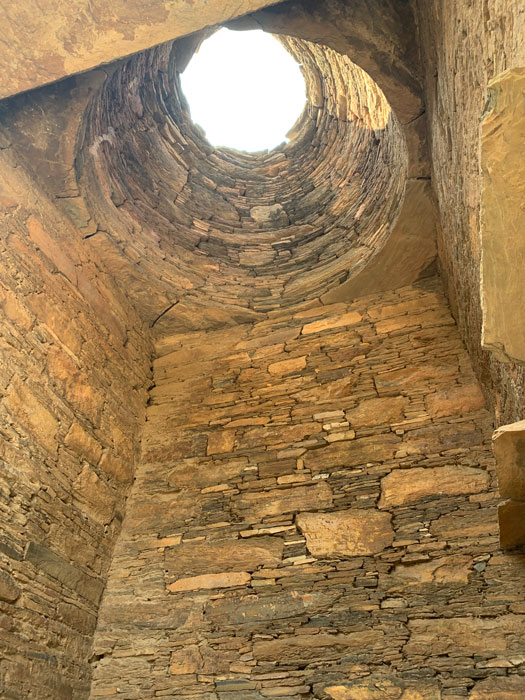 We also climbed down into a dimly lit passage running along one of the large courtyards. A series of tiny meditation cells lead off from this passage. One has to practically crawl inside  the small opening to enter into the windowless chamber inside. The darkness inside is complete, a blackness so extreme I felt I was facing an abyss. Using my phone torch to dispel the pitch, I could not imagine how a group of monks spent hours on end in this space.

I enquired about the kitchens here and was told that the monks did not cook. Every day, a few of them would walk down to the neighbouring settlements on the hillslopes and beg for food. Again, I was struck by the thought of this daily trip, made even in extreme temperatures, up and down the hillside. Clearly, it was a life of extreme asceticism; denial, humility and discipline being the guiding tenets on the road  to enlightenment.

Descending from the sublime heights of Takht Bahi we sat down in the orange orchards around the site. We chose to have our lunch here; hearty rustic fare of wonderfully soft naan and the most succulent chapli kebabs for which Mardan is renowned. We rounded off the meal with incredibly sweet and juicy blood oranges, all washed down with the customary green tea.

Sated in mind and body, all that was left was to reflect on our glorious heritage on the drive home. Paksitan was truly the hinterland of pluralism, a cross roads of cultures and religions, a meeting point of traders and travellers, of mystics and mendicants. It is sad to see how much of that we have lost. But it’s never too late to embrace our past and live up to this incredible heritage.