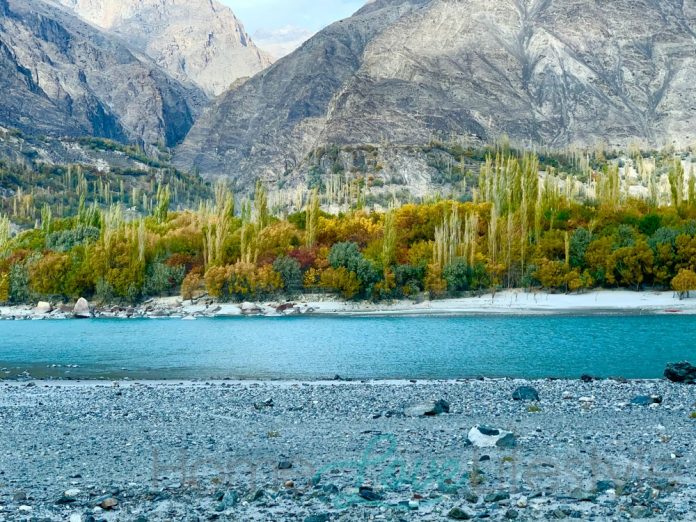 Travel to Shigar and Khaplu starts in Skardu.  And the hardest part of travelling to Skardu is getting there! Imagine our disappointment when our early morning flight from Islamabad to Skardu was cancelled due to poor visibility. Many friends advised us to cut our losses and take a road  trip to some nearer vacation spot instead. After all, the Pakistani north abounds in beauty. But I was determined to get to Skardu and we decided to try again the next day. 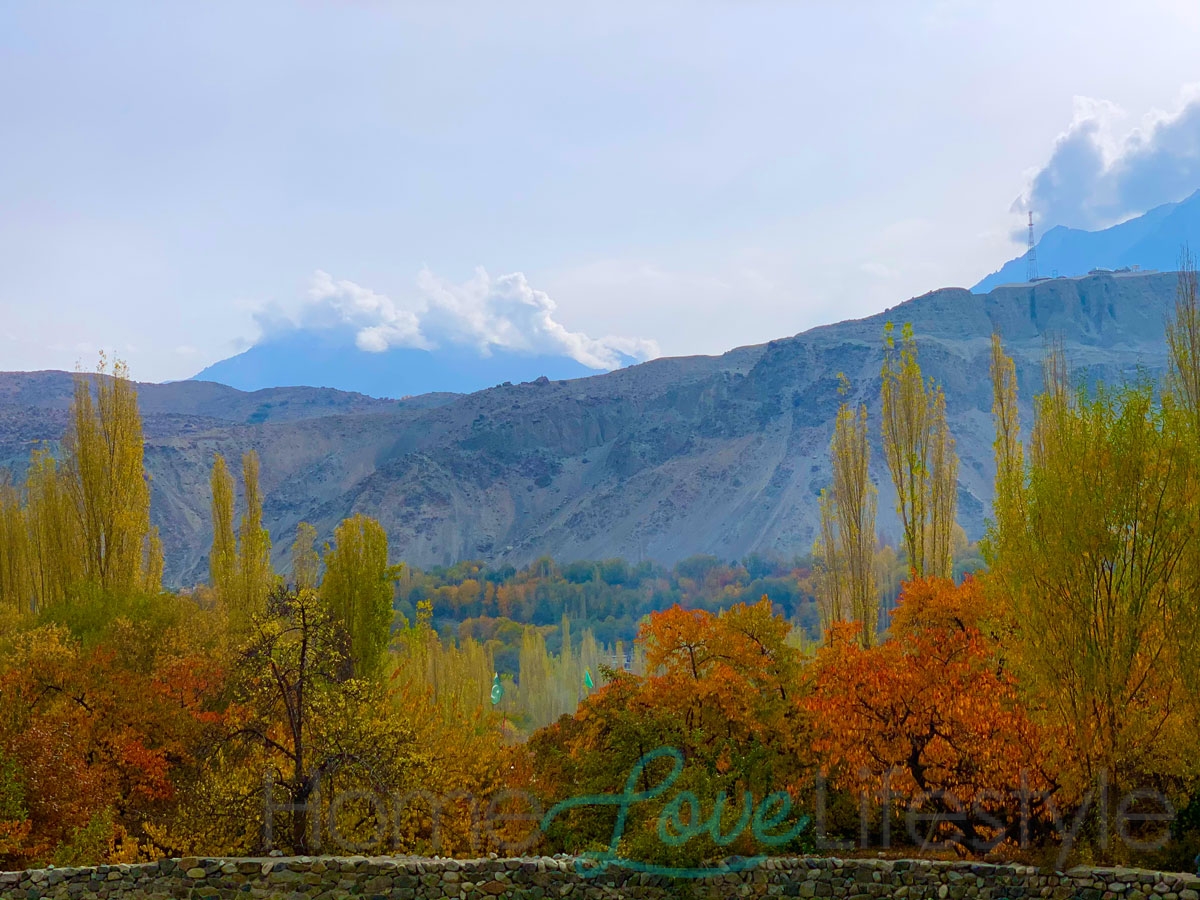 After many prayers and positive vibes to the universe, we finally boarded the plane to Skardu. The passengers were mostly locals returning home with a smattering of tourists like us.  We were catching the narrow window before winter descended and snow made most areas in Skardu inaccessible.

Skardu is a wide valley ringed by the majestic, towering peaks of the Karakoram and the Himalayas. This is a popular destination for serious trekkers who want to tackle summits like K2 and Nanga Parbat. Part of the Gilgit-Baltistan region, the natural grandeur here is absolutely staggering. The flight there is a treat in itself as we excitedly spotted mountain peaks and passes. In fact, the sense of awe and wonder that set in during the the flight never left us throughout our stay in this magnificent, magical valley.

From Skardu airport we drove directly to Khaplu which is about four hours away. As we left the town of Skardu behind, the mountain roads wound past villages, fields and orchards and clusters of trees flaunting their brilliant autumn colours. 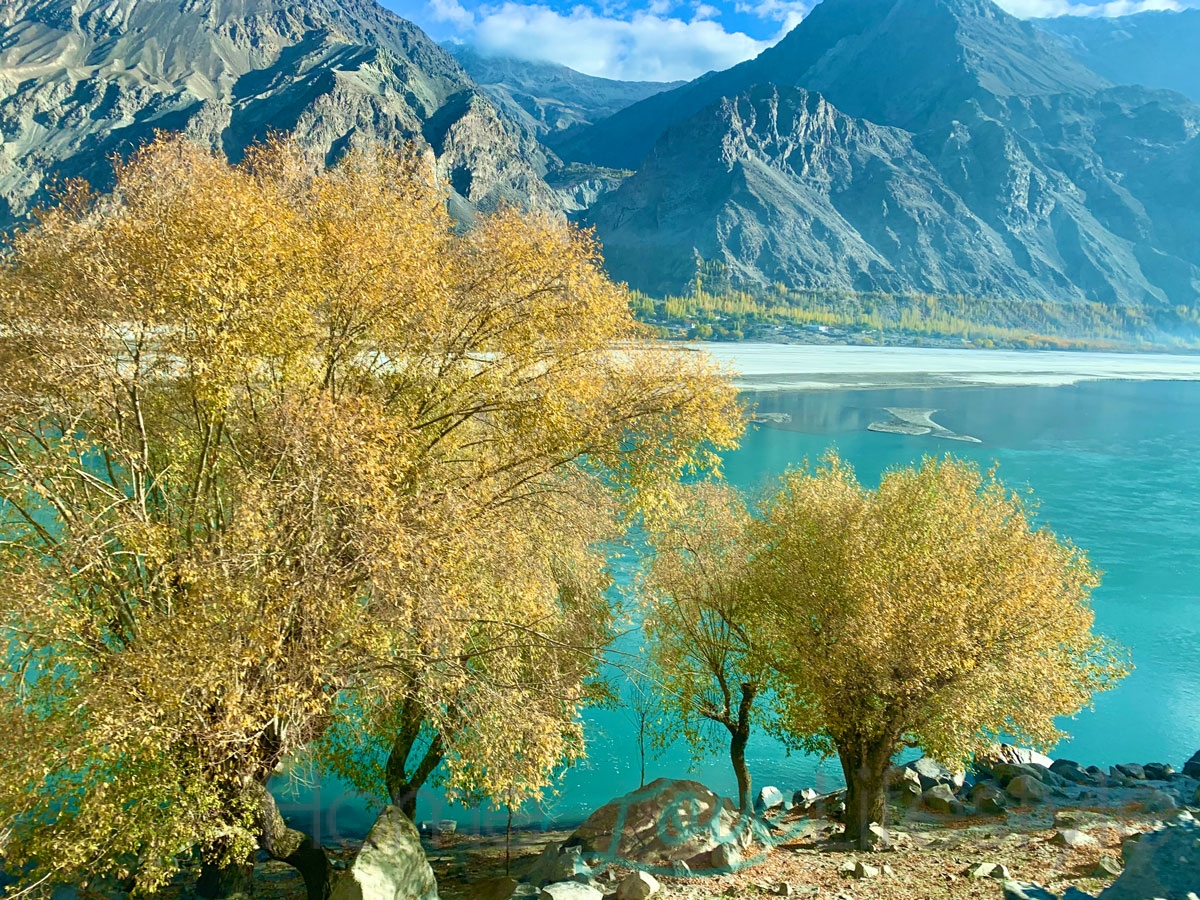 The cold crisp November air was bracing and the views became increasingly spectacular. The  waters of the Indus shimmered a deep turquoise, the sand on the river banks glinted silver and the trees boasted brilliant yellow, orange and red hues. All of this cradled in the lap of some of the most magnificent mountain ranges in the world. The particularly vivid blue of the river and its crystal quality was also special to this time of year. In the summers, meltwater from the glaciers flows into the rivers and increases its force and volume. The water subsequently becomes more muddy. 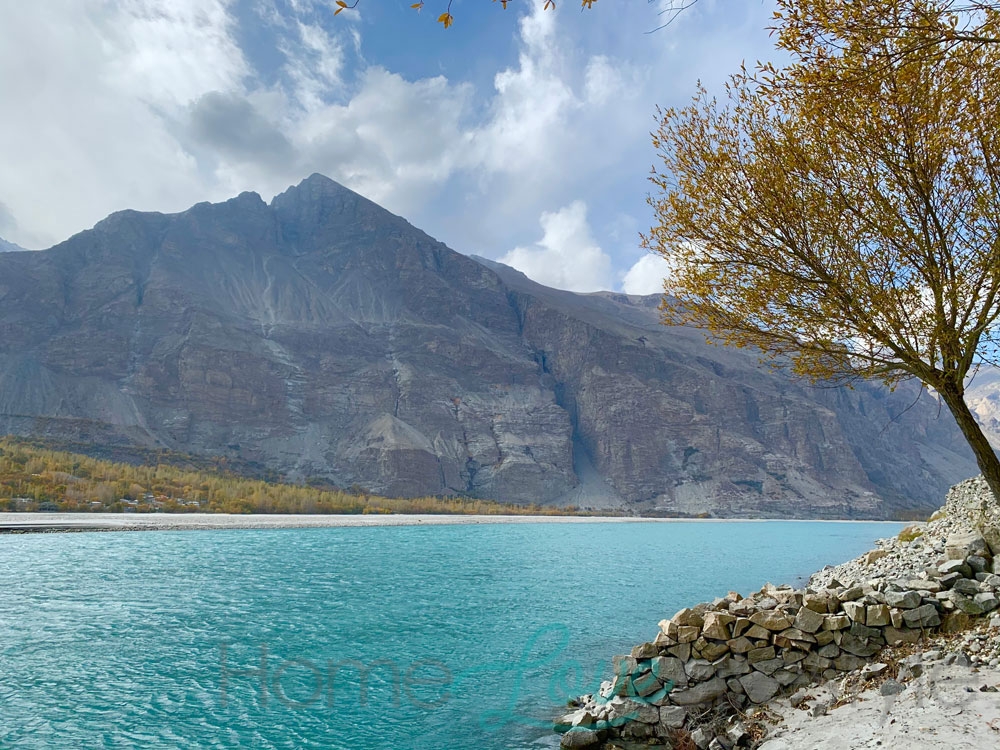 Leaving Skardu behind we entered Ghanche district. At the check post our driver pointed out the road which leads to Kargill. We continued along a route on which we could see Siachen in the distance. Around this point the river Indus also merges with the Shyok river which flows from the mountains of Laddakh. As the roads climbed higher and higher, we were struck with the sense that this was the northernmost Frontier of Pakistan. Beyond the mountains lie Laddakh and then Tibet. In fact, Khaplu was christened Little Tibet in the old times. 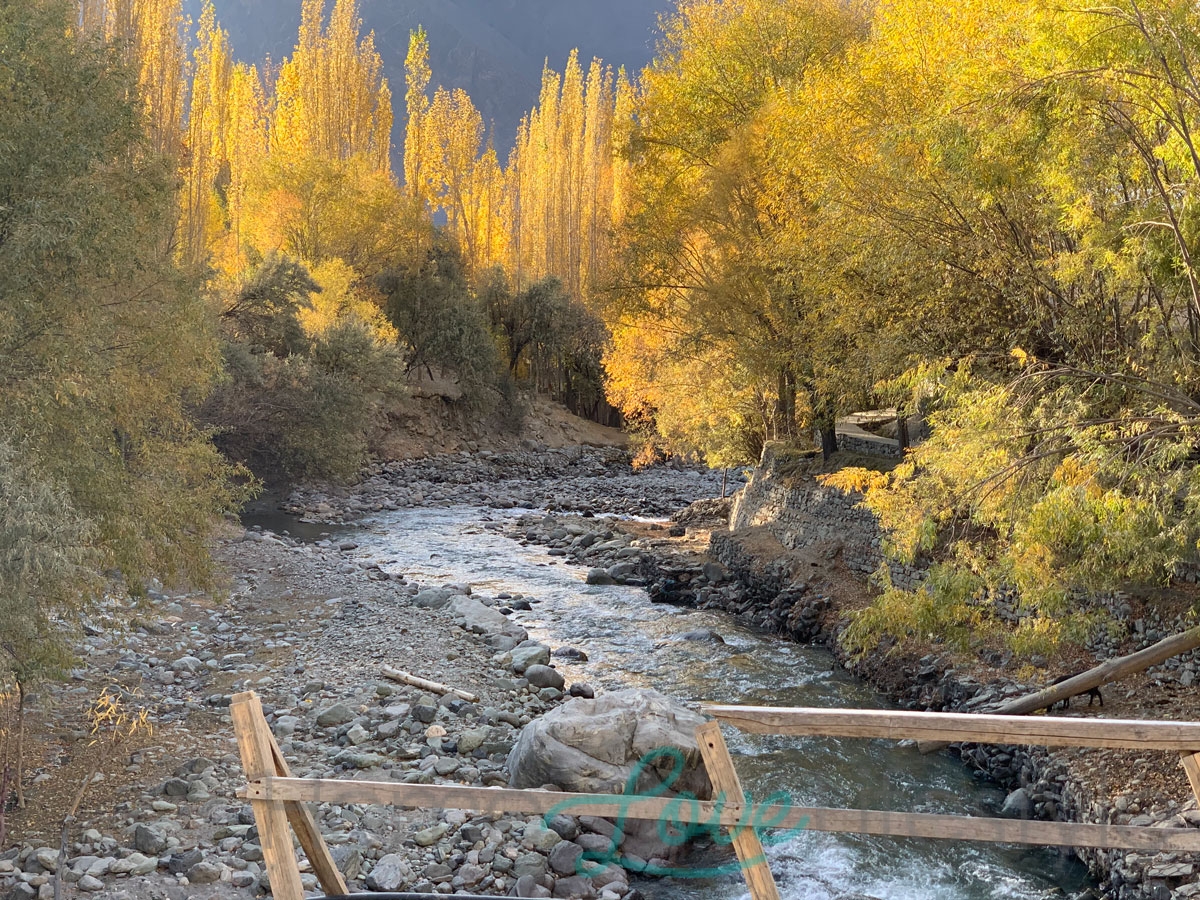 The fall colours intensified as we drove along, the golds, yellows and flaming reds of the leaves vying with each other. And the Shyok was a turquoise ribbon winding through the valley. The tall silver birch trees flaunting bright yellow foliage rise vertical and almost branchless into the sky. They stood like sentinels along the narrow roads. 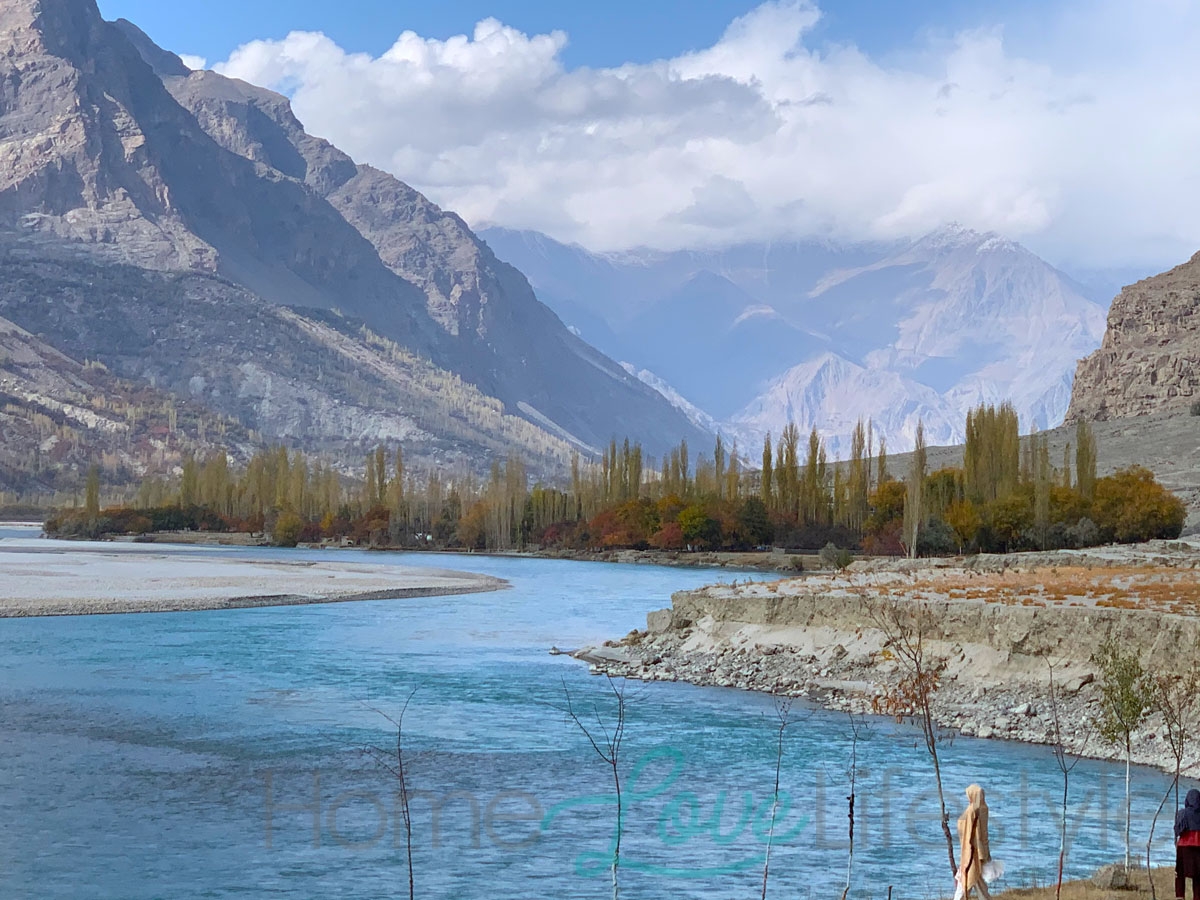 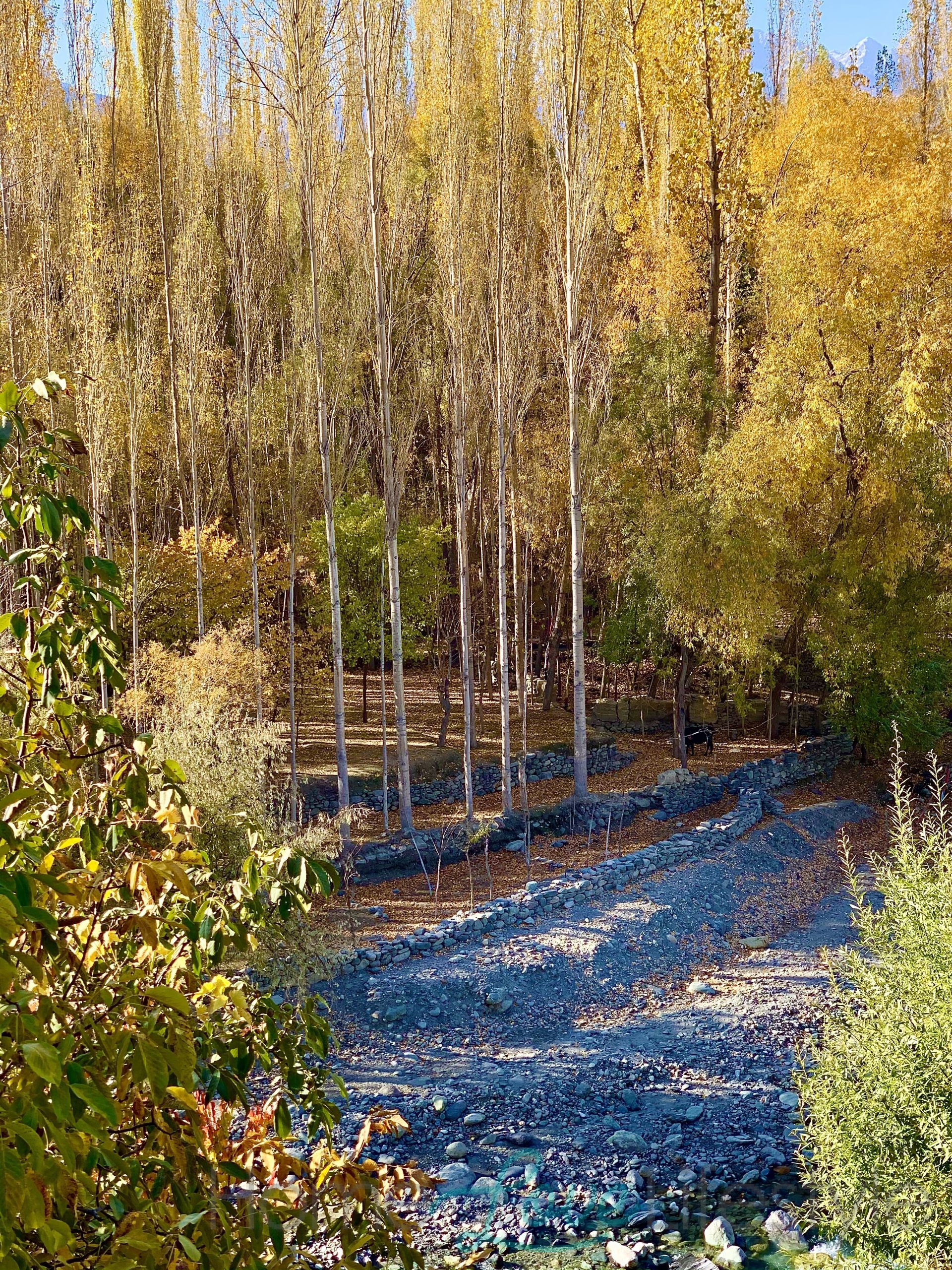 In fact, the drive from Skardu to Khaplu surely ranks amongst the most spectacular trails anywhere in the world. This scenic route is jaw-droppingly beautiful and had me grabbing for my phone camera every few minutes. 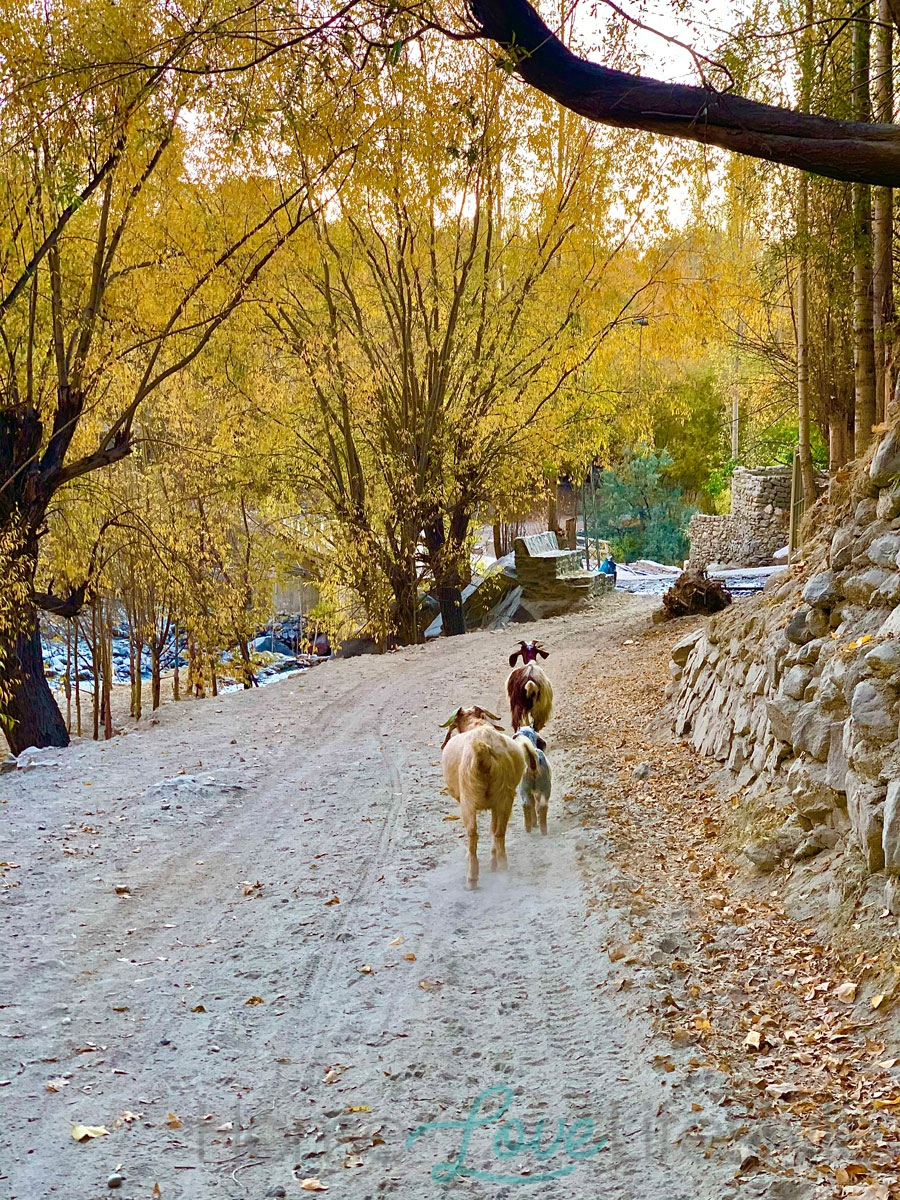 We finally arrived at Khaplu some 8500 feet above sea level and drove through idyllic villages. We saw women washing clothes in crystal streams and woolly cows, fat hens and rosy-cheeked children scurrying about. Many of the women either had straw baskets filled with firewood strapped to their backs or tightly wrapped babies. 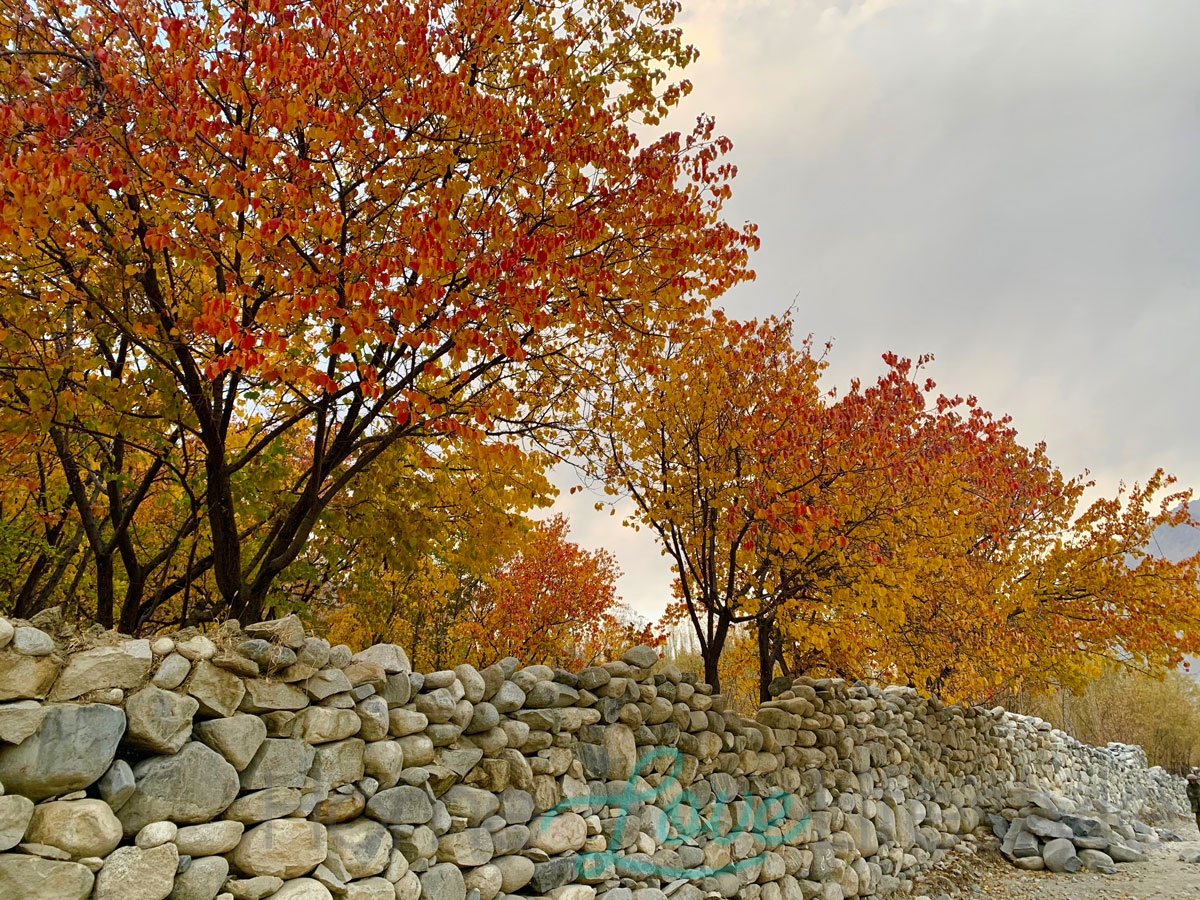 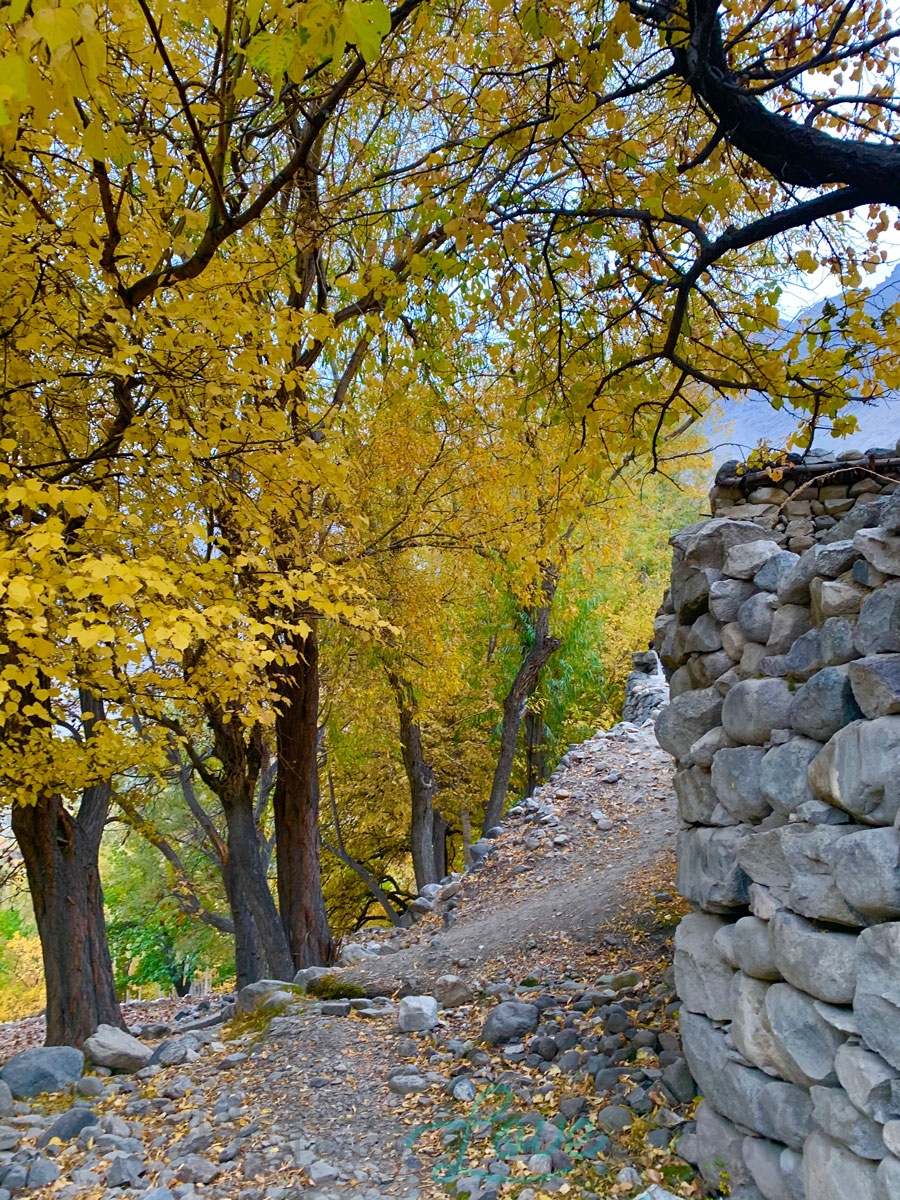 Tired but with hearts and minds brimming with the incredible vistas we had seen, we finally arrived at the Serena Khaplu Fort. This is a 19th century fortress palace now converted into a boutique hotel by the Agha Khan Foundation. Since flights into Skardu had been cancelled over the last two days, the hotel was almost empty. We were offered rooms in the new wing. But I had my heart set on staying in the old historic building. 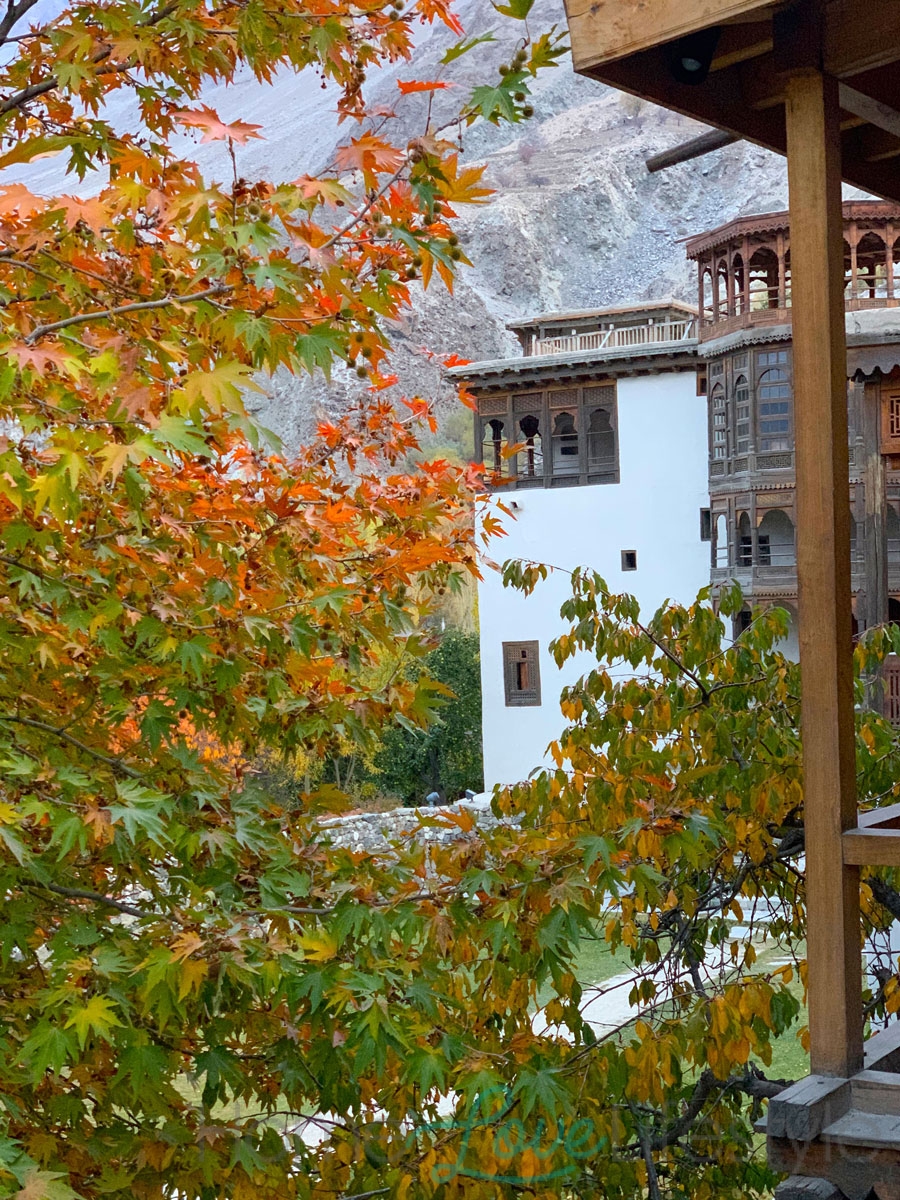 With only handful of staff members in the hotel, there was a palpable sense of remoteness and stillness in Khaplu. The absolute silence in the ancient mud corridors and the intense blackness of the night added to the atmosphere. 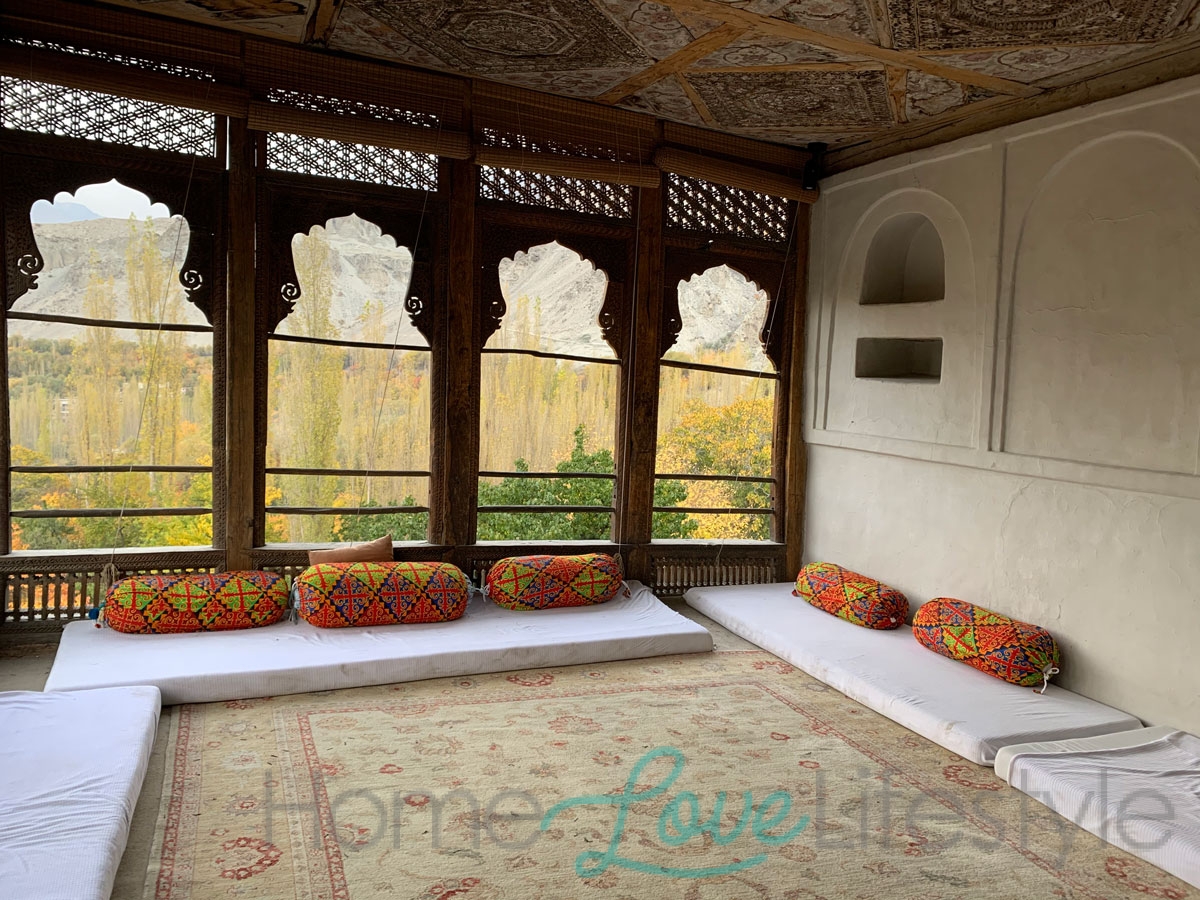 Ancient sites and old buildings hold some primeval fascination for me and I can never shake off the sense of past histories and the collective consciousness that pervades the atmosphere. I especially enjoyed sitting in the beautiful alcoves with wooden lattice work windows which over look the stunning valley. The hotel gardens were small but ablaze with autumn colours and the trees laden with crisp green apples.

Our hotel room had all the mysterious charm I was seeking as well as the creature comforts of a robust heater and lots of hot water. Water is plentiful in Khaplu thanks to the river and all the mountain streams that gush forth from the mountain slopes. 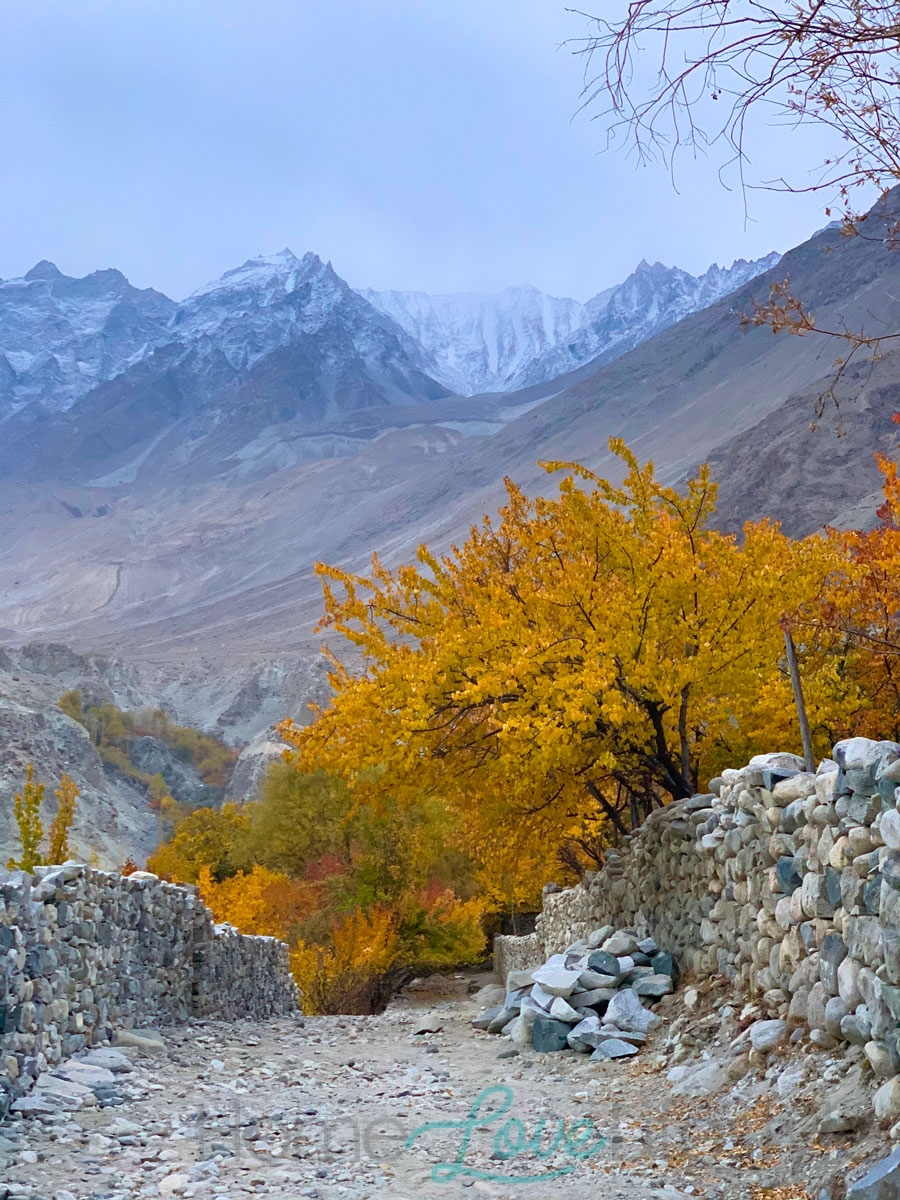 The hotel also houses a museum which is open to outside visitors but was closed off during our visit due to the corona pandemic. It was very interesting to see the old artefacts and visualize how the Raja and his family lived here and held court. 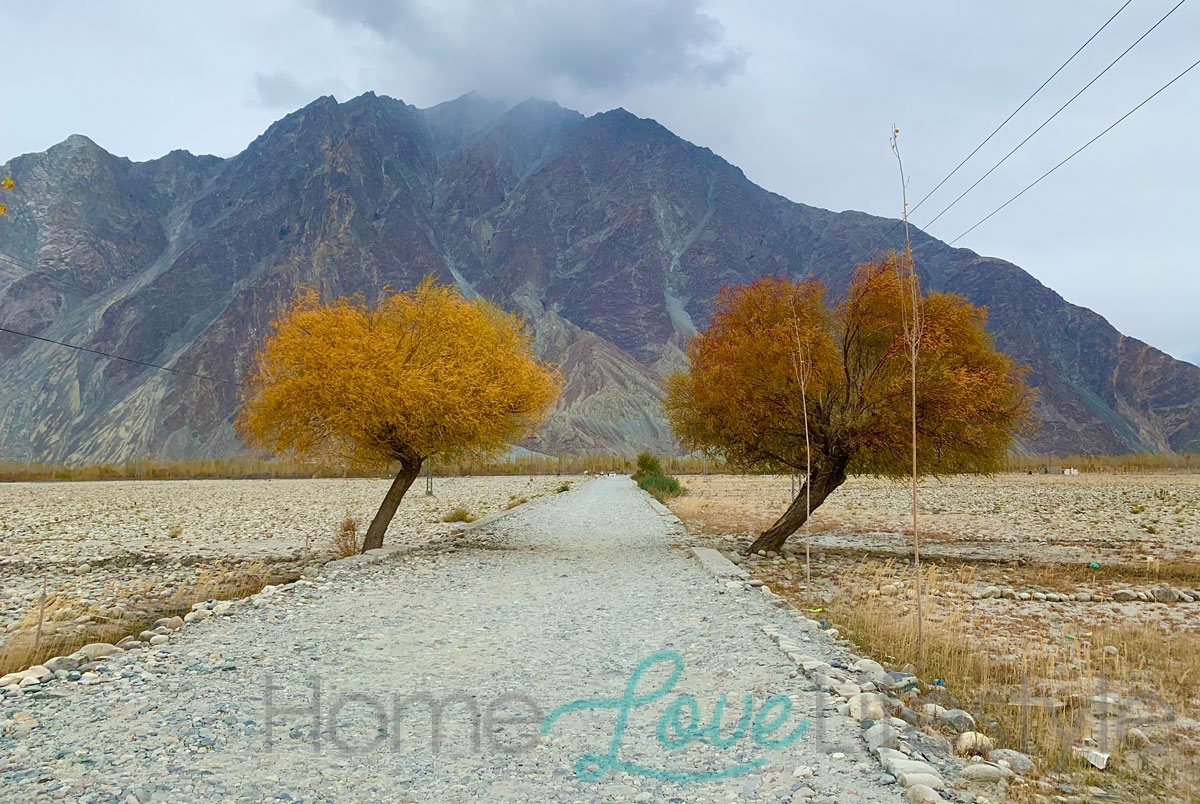 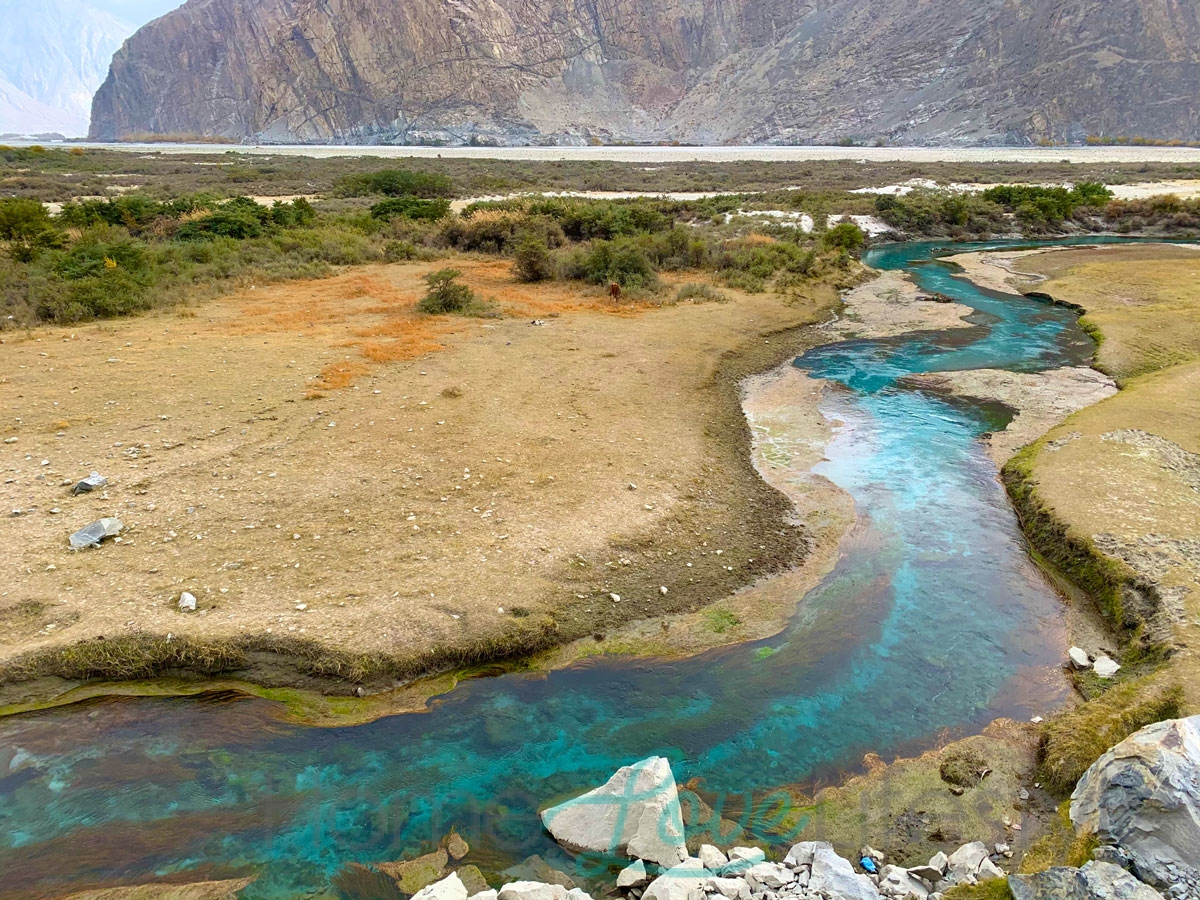 It gets dark early in November and cold as well so it’s best to turn in early and get an early start in the morning. The next day we drove to the viewing mount to see the Masherbrum peak and then onwards to the small village of Saling. Along the drive, I had to walk down to the river’s edge, past grazing cows, to sample the crystal water. 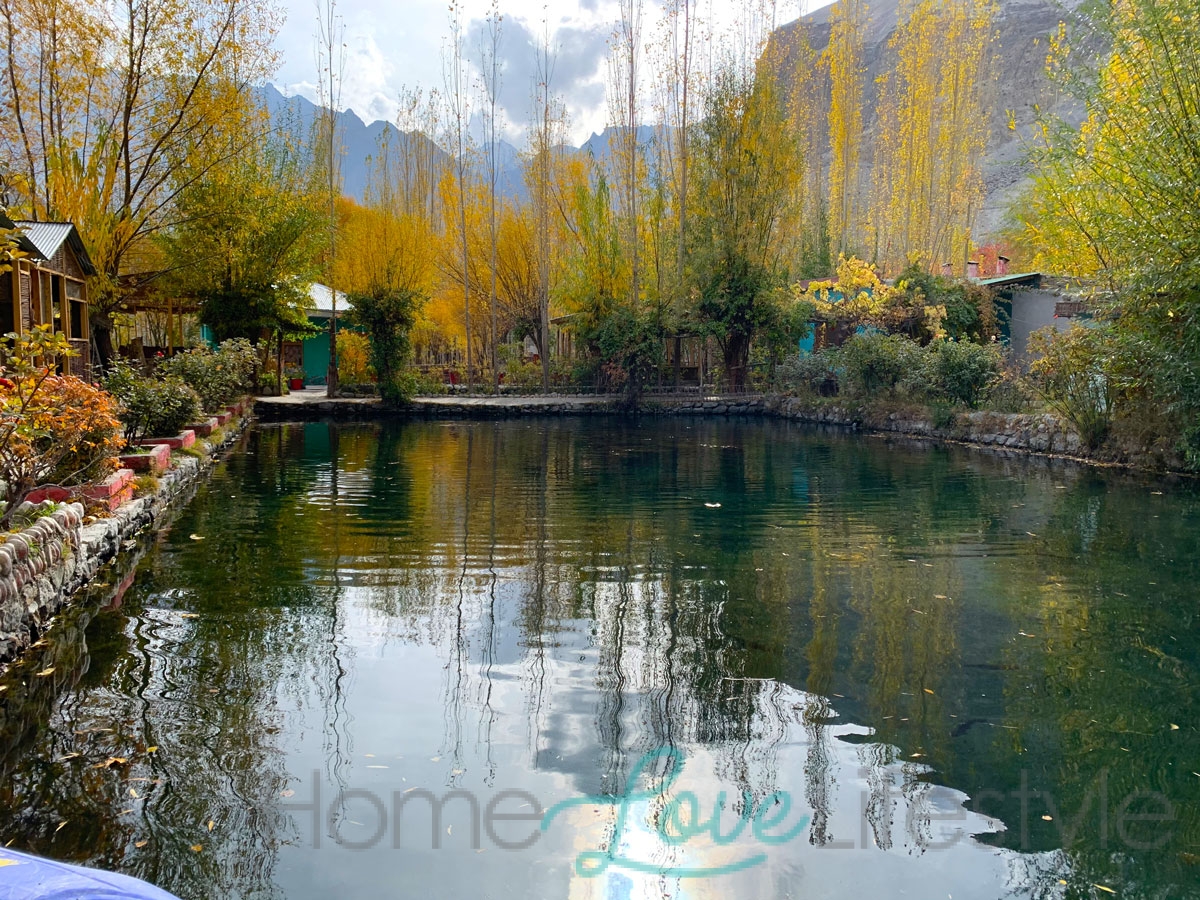 At Saling our stop was the Saling fish farm which is actually a restaurant. You can catch your own fish from the small pond and the cook will grill or fry it according to your taste. We chose to have our plump rainbow trout grilled and it was served up on a sizzling hot plate, doused in a light sauce with a side of fries. Delicious! With the crisp cold air in our faces and the bright sunshine adding a welcome warmth, we thoroughly enjoyed every bite. We washed it down with the local green tea to which I was becoming quite addicted. 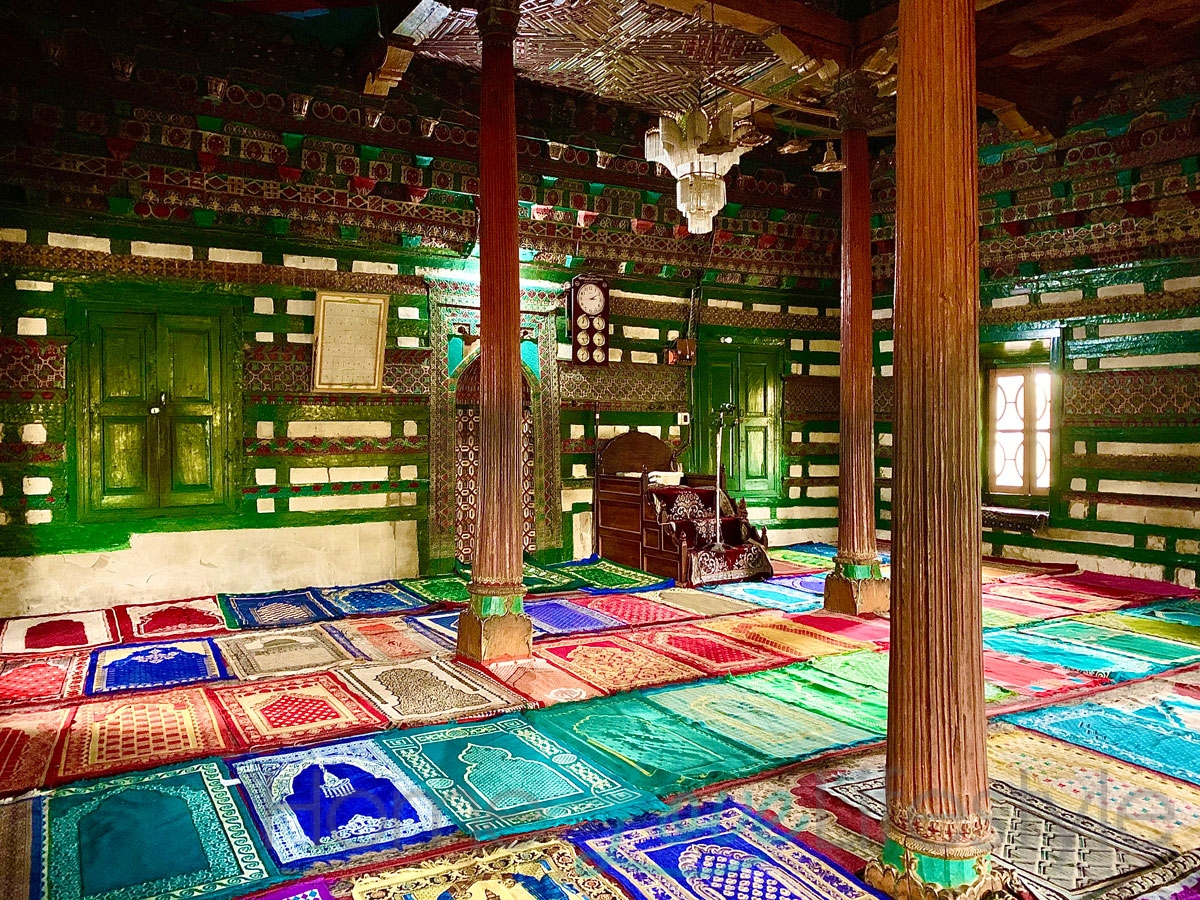 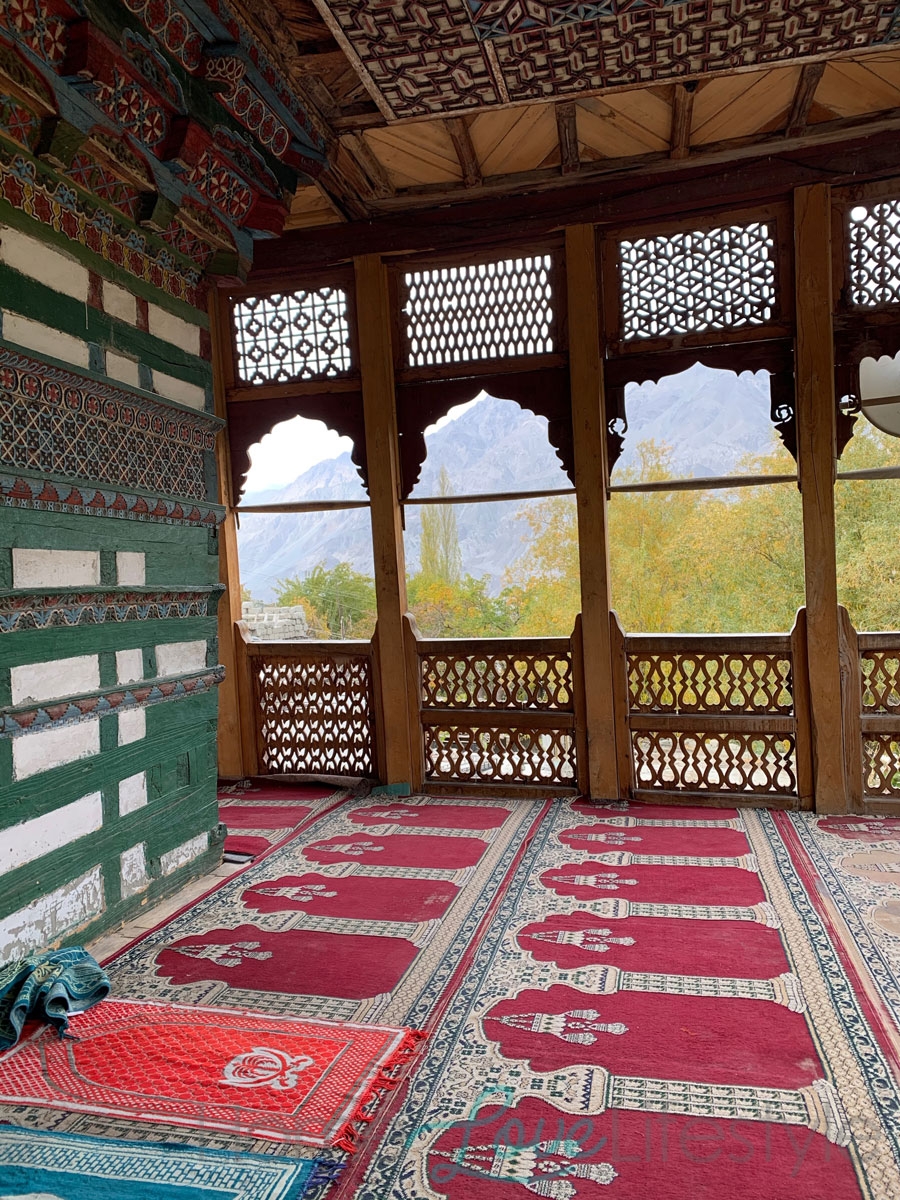 We also stopped at the ancient Chaqchan mosque. This quaint wooden mosque is notable for its history and the detailed wooden carvings. The multi-coloured prayer mats lining the floors in bright jewel colours brighten up the dark interior. I was pleasantly surprised to see that a lady was responsible for keeping the mosque clean, something one would not see in the big cities. 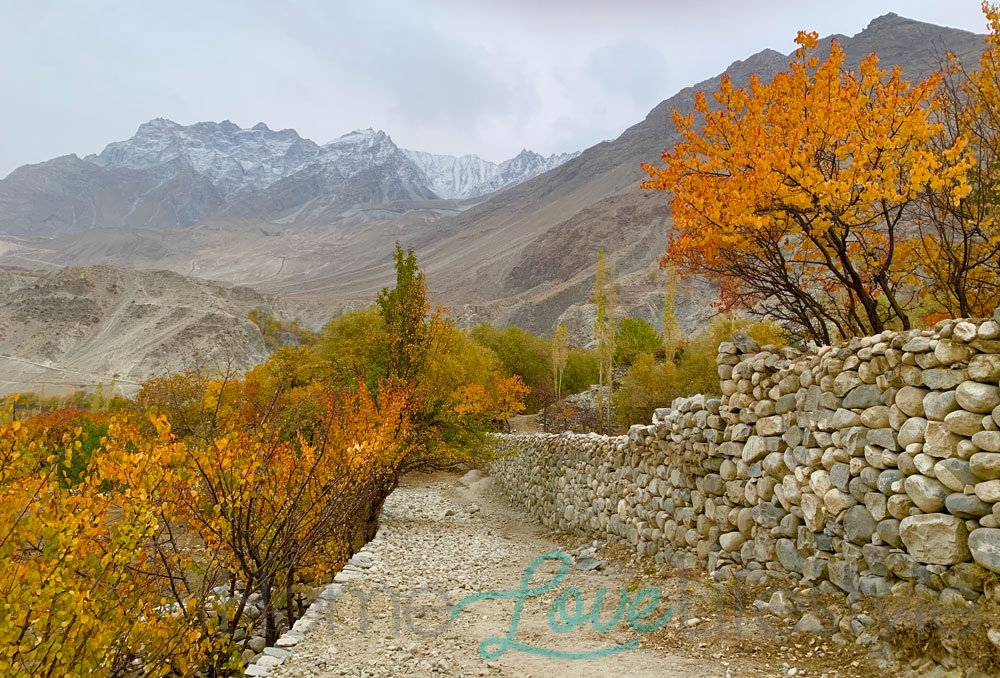 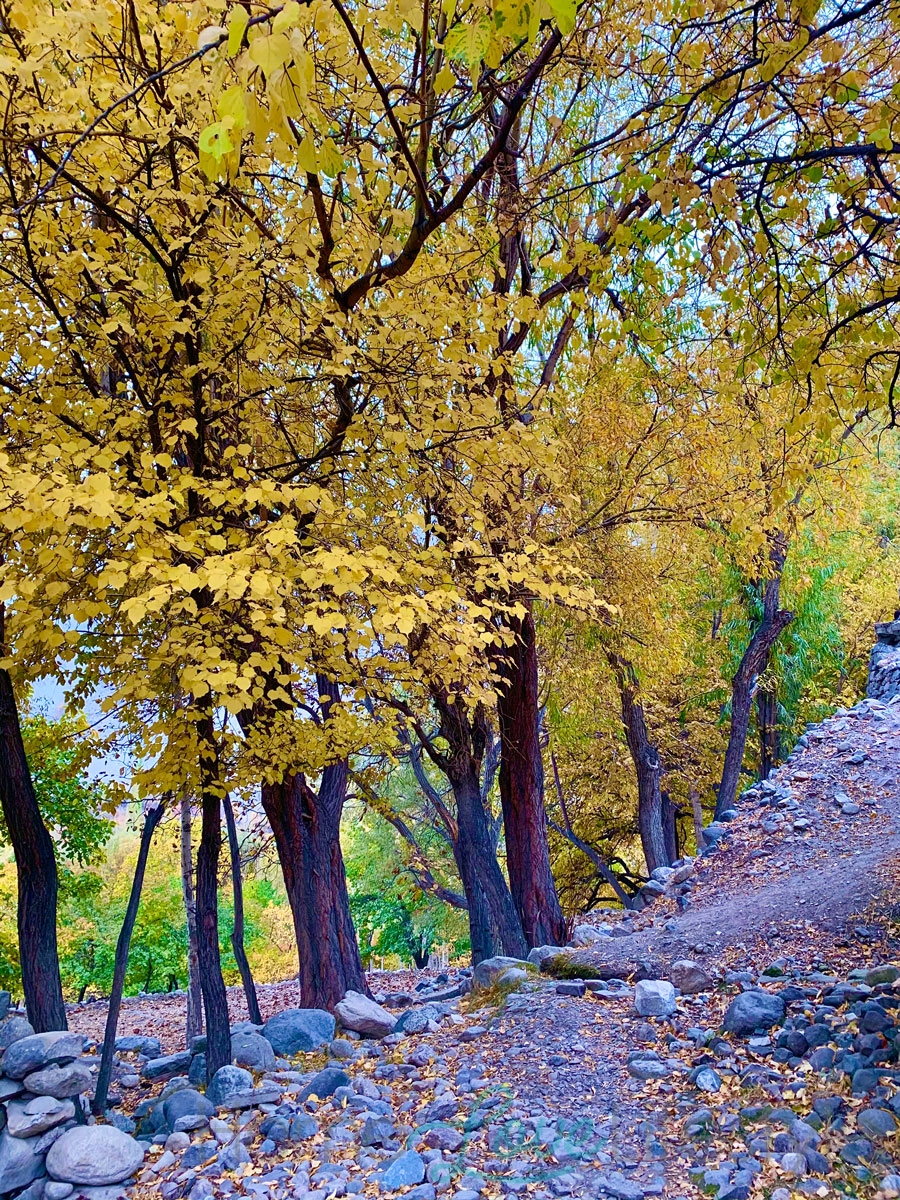 I savoured my last evening in Khaplu. We walked through the streets, past flaming red apricot  and russet mulberry trees, picking our way through dry river beds and past now fallow farms. 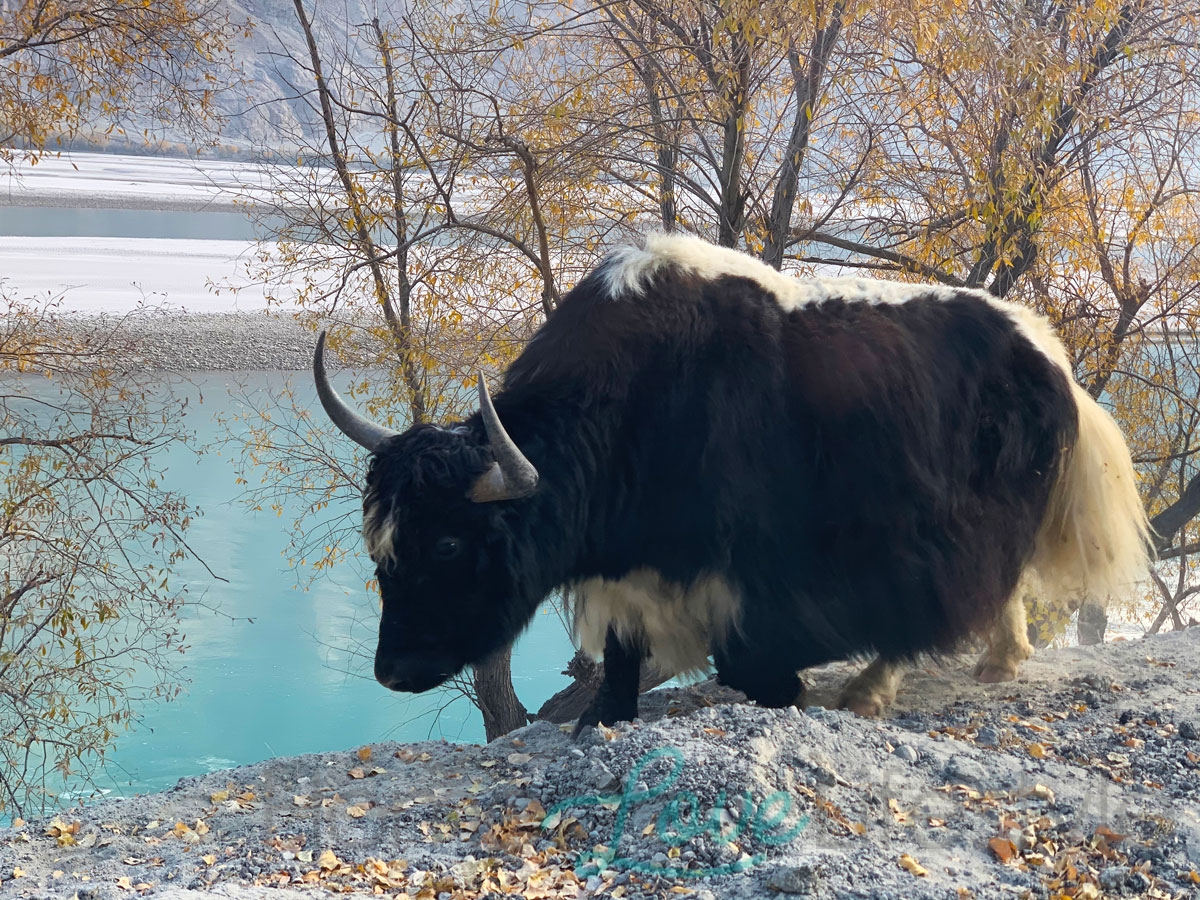 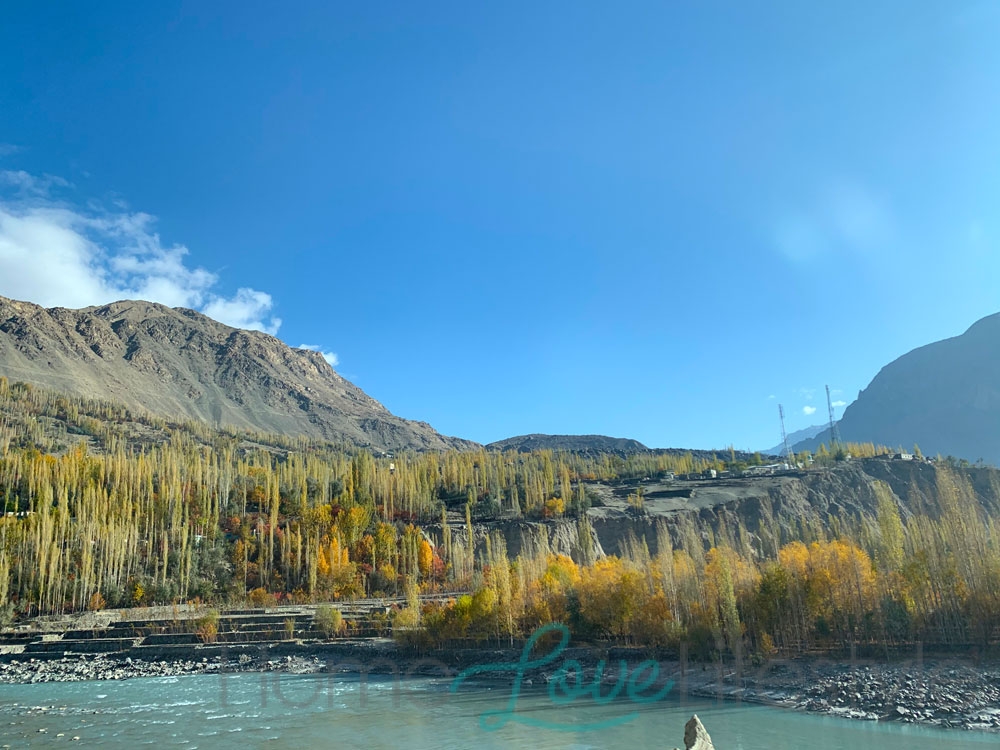 Next morning we got off to an early start bolstered by a healthy breakfast of the local muesli, eggs and homemade jams and butter. The drive from Khaplu down to Shigar offered more of the same breath-taking vistas, prompting spontaneous exclamations from my lips. At some places the river bed seemed to have been landscaped by a Japanese gardener. Smooth boulders rose above the beautiful waters and artistically placed trees. We were also treated to the sight of a magnificent yak casually ambling along the mountain roads. Yaks are herded by the locals and their milk and meat is consumed while their hair is used to make rugs.

After the remote seclusion of Khaplu, Shigar felt like a bustling town. The Serena Shigar Fort hotel is also a more grand version of the Khaplu Fort. Both forts have a Tibetan architectural influence but Kashmiri craftsmen were brought over for the exquisite wooden lattice work. Both forts were used as residences by the local Rajas. The Shigar Fort has, in fact, been leased to the Agha Khan Foundation by the present Raja.

Tired after our long drive, we were happy to just relax at the Shigar Fort and soak in our beautiful and serene surroundings. From our balcony we were treated to a magnificent view of towering snow-capped peaks, autumn-hued trees and the Shigar river gushing below. To sit here and sip on the local tamboro green tea and munch on organic dried apricots and mulberries was enough to keep us where we were.

The hotel restaurant also offers a charming rustic outdoor patio space which overlooks the river. In summer the patio is laden with fat bunches of grapes hanging overhead. The hearty local soups filled with home-made pasta and pieces of meat or vegetables had become a staple for me. It was the perfect nourishment in the cold weather. 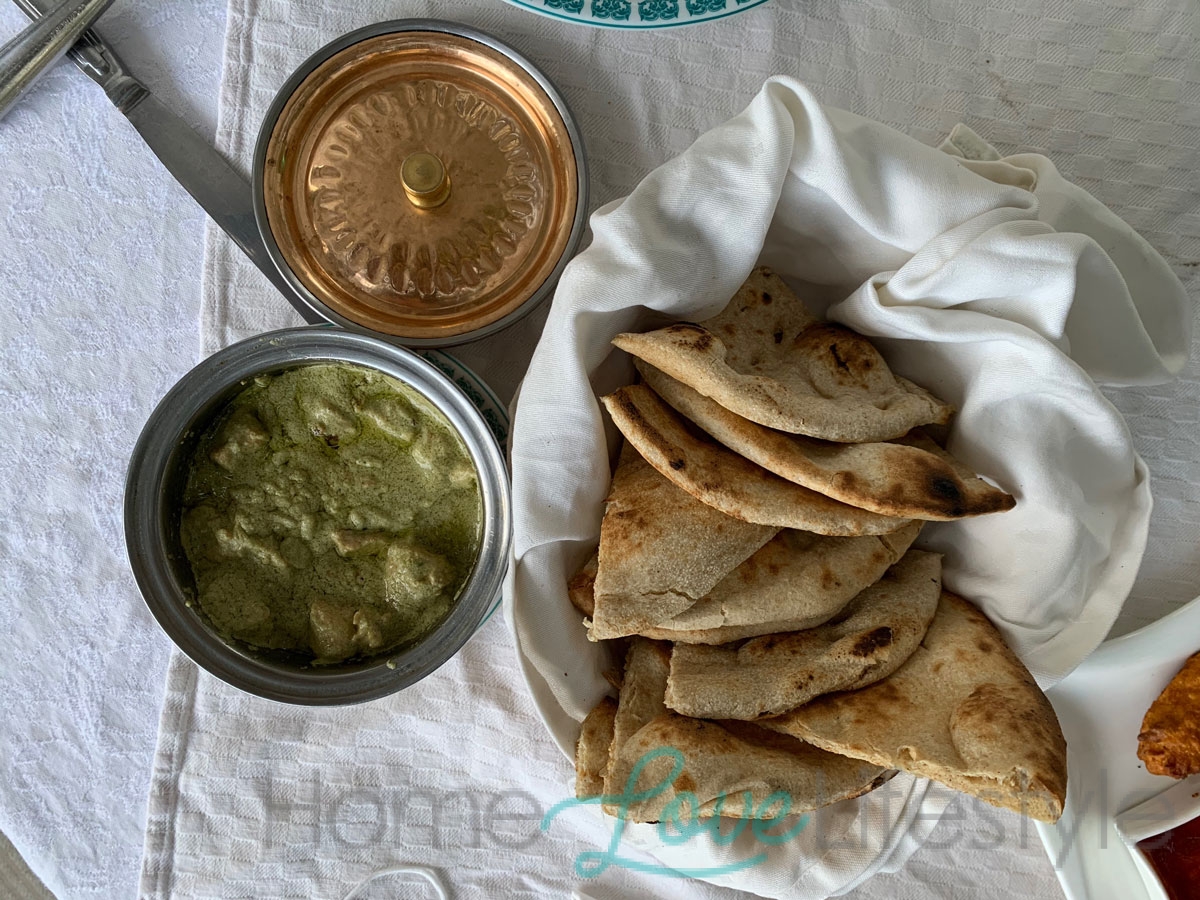 The breads, made from the local buckwheat, were also delicious. Both the roti straight from the tandoor as well as the baked loaf we had at breakfast were superlative. Other notable local dishes are the meats simmered in crushed walnut paste and cooked in apricot oil. 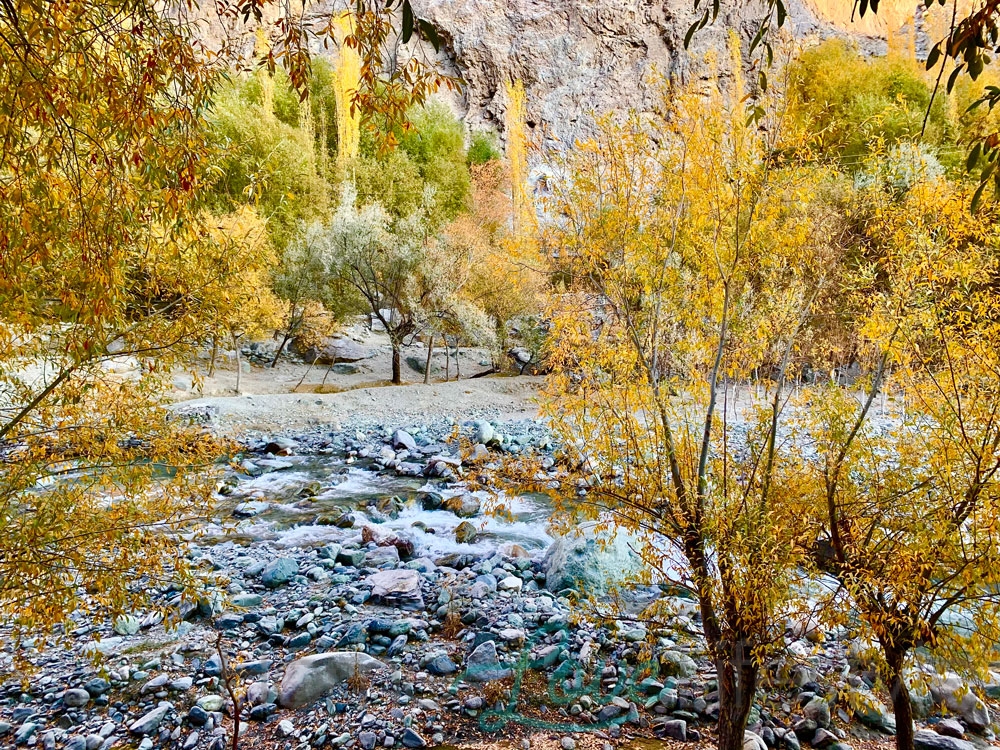 After our meal, we took a walk along the river, leaving the road to follow a dirt trail used by herders and other locals to go up the mountainside. If I had more time would definitely have trekked up to the ruins of the old fort perched on the hilltop.

The next day, we walked down to the local shops to stock up on dry fruit and apricot oil to take home with us. We also found a small shop selling artefacts made with the local serpentine stone. This green stone is said to have various healing properties as well as warding off the evil eye.

We then drove down to the beautiful Satpara Lake which sits like a jewel in the dry hills which surround it. The lake waters now supply a dam which has been built here. I also wanted to see the Buddha Rock which lies enroute to the lake. Skardu region was, in fact, first settled by a Tibetan ruler and Buddhism once flourished here. A rocky path leads up to the Buddha rock which is a large granite boulder with carvings of the Buddha. It depicts Buddha in a classic seated pose surrounded by Bodhisatvas. The rock dates back to the 9th century and made me curious about more ancient Buddhist relics in the area. 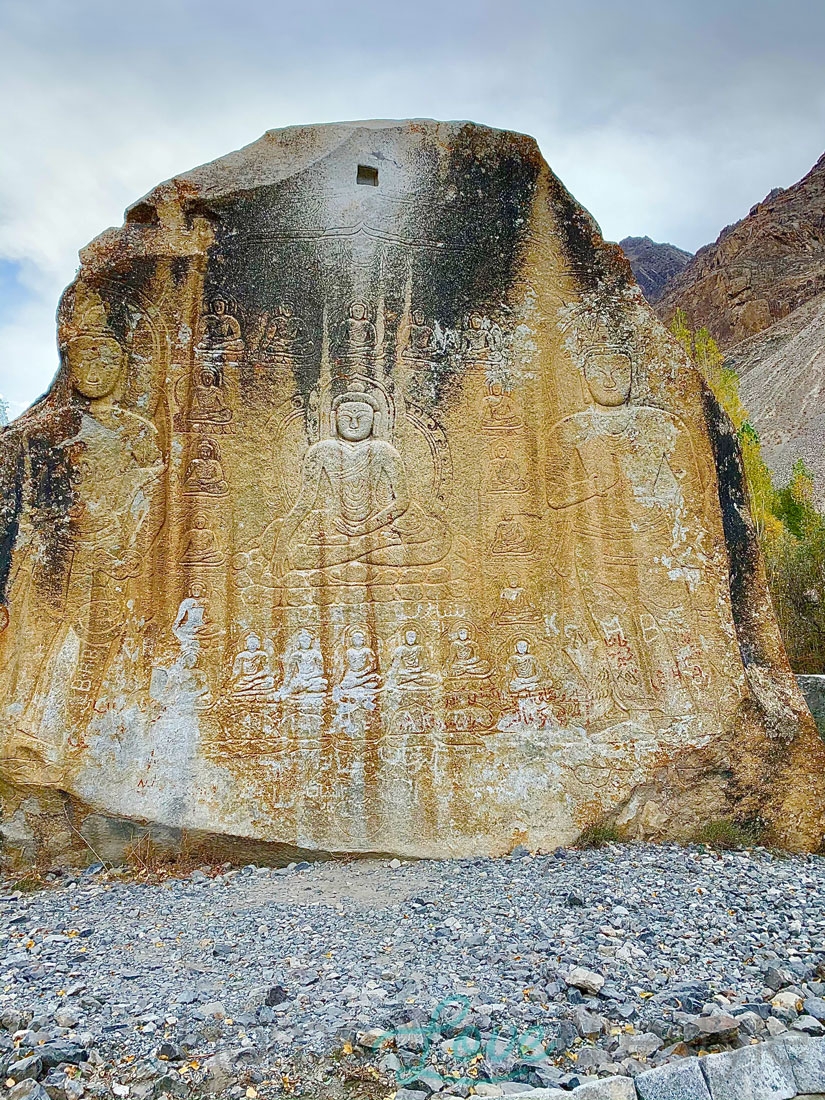 We made our way back to the hotel to bask in the rays of the setting sun on our terrace. As night fell, the sky became bedazzled with a million stars. This was such an intense cluster, more than one can see ever in big city skies. It was also our last night in this magical valley.

History, beauty and a sense of enchantment all come together in Skardu. I am already planning to return in the summer months to experience this beautiful region, this time bedecked in the foliage and bounty of summer.