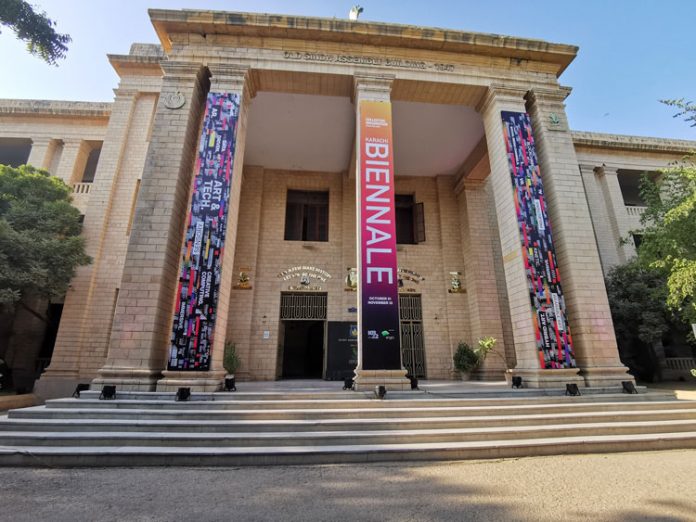 The historic and hallowed halls of the NJV School (the first government high school established in Karachi) hosted the inaugural of the third Karachi Biennale on Sunday 29th October. Set amidst the teeming streets of Karachi’s chaotic city centre, the inaugural and accompanying exhibits formed a tiny oasis welcoming harrowed urbanites into flights of fancy. 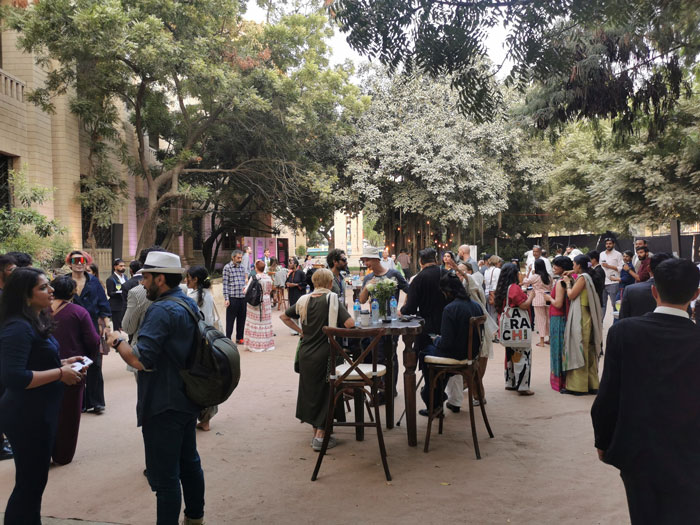 Over the next two weeks, 9 venues across Karachi will come alive with various exhibits by 40 participating artists from Pakistan and 13 other countries. Curated by artist, Faisal Anwar, the Biennale seeks to explore the intersection between art and technology.

The highlights of the inaugural events included a musical performance on the ancient Sindhi Borindo by Faqir Zulfiqar. There was also performance art, titled Forgotten March,  by Amin Gulgee featuring students of the NJV school. But most notable were the four striking art installations housed in four large rooms, one devoted to each exhibit. 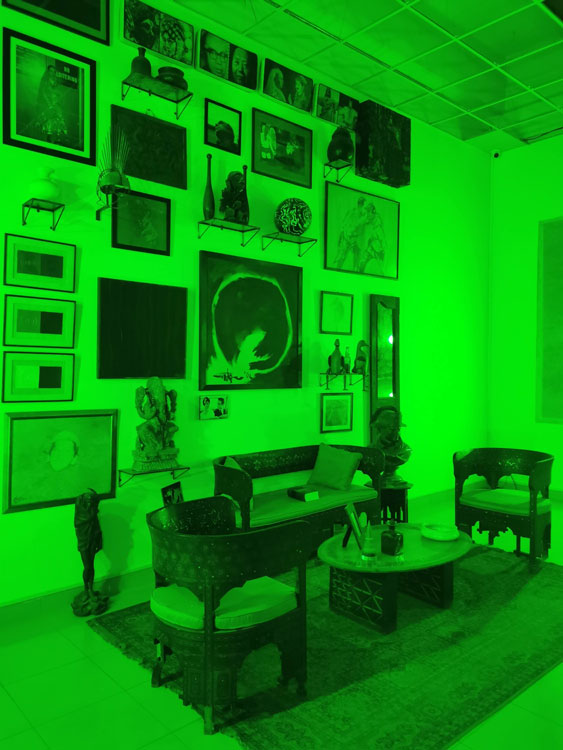 Amin Gulgee’s Memory Room is an intensely immersive experience with visitor’s taking a walk through the recesses of the artist’s memories evoked by sound, scent and visual cues. Cherished family objects are carefully displayed while the ceiling is covered with a patchwork of saris belonging to the artist’s late mother; a quilt of memories as it were or fragments of the past pieced together into a story. 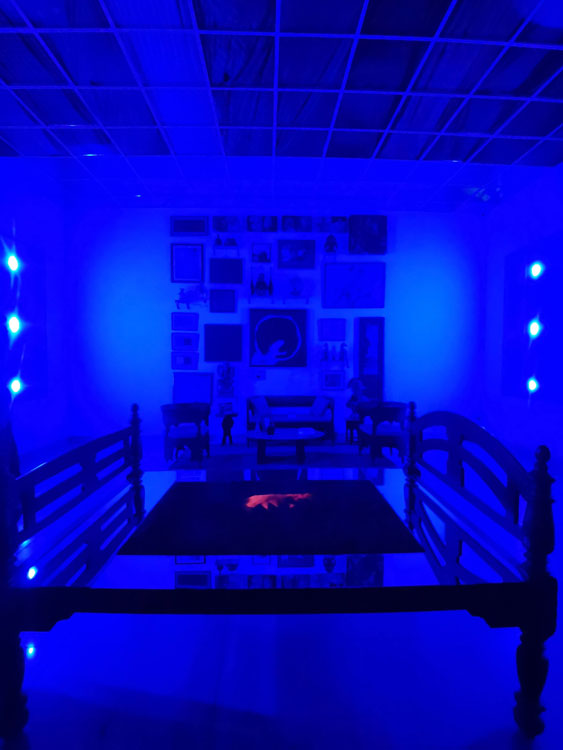 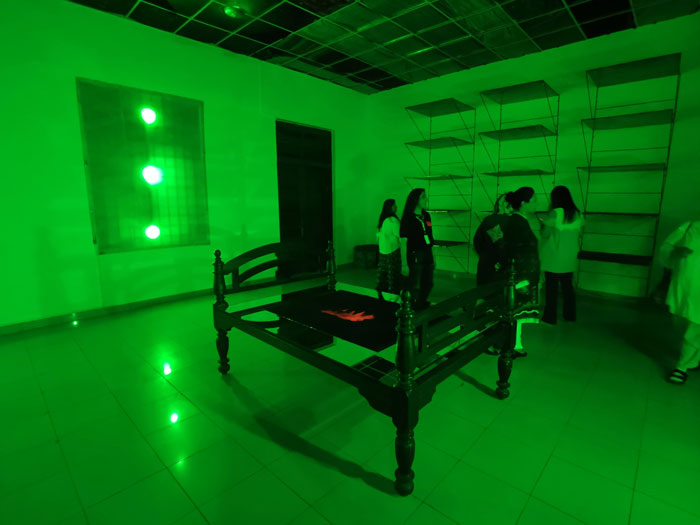 A strong scent of raw turmeric and other spices suffuses the air. A digital screen placed flat on a bed frame in the centre of the room pulsates with an image of the artist’s visage, contorting and emitting groans which echo through the room.

Visitors are plunged into the artist’s mind as he lays bare his memories in this vividly personal and haunting exhibit. The performance art  by Amin Gulgee overlaps with this installation.

Tech meets art in this environmentally meaningful installation by artist Yasir Darya. Visitors are presented with a number of screens depicting a motorcycle rider cruising through the streets of Karachi. The motorcycle, notably an electric bike which creates no pollution, is fitted with a device measuring air quality. As the rider moves through different areas, the air quality is reflected in colours ranging from green to red which light up the walls of the installation room. 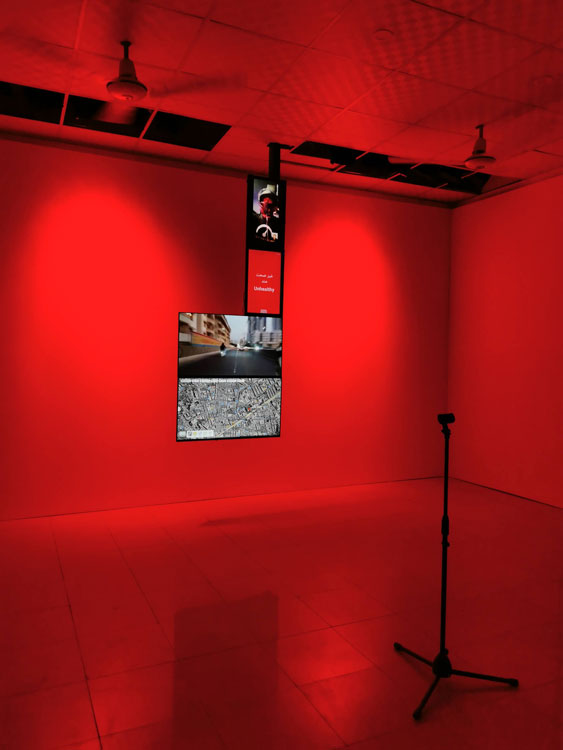 During the course of the Biennale, at certain times, visitors will be able to participate in live and interactive sessions in real time as the rider weaves through the city streets. The artist has collaborated with app designer Sophia Hasnain and manufacturers of the Vlectra electric motorcycles being manufactured and marketed in Pakistan, making this a very exciting, cutting edge project. 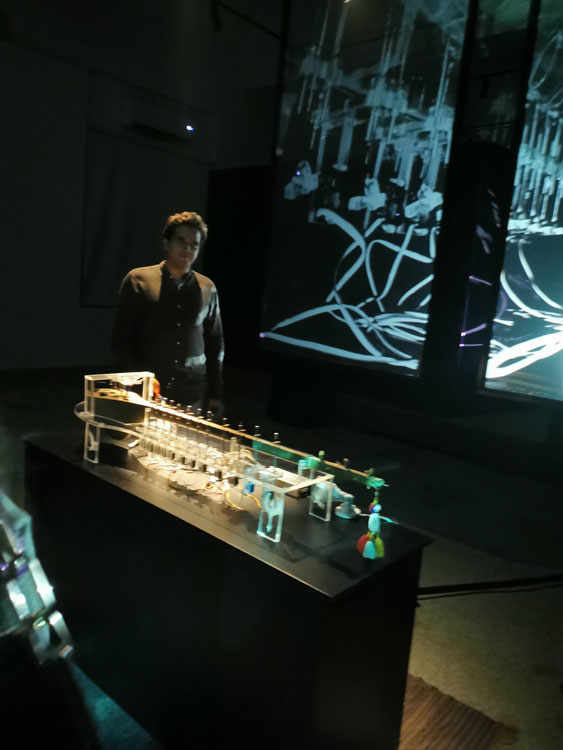 This project is the collaborative effort of the KCR Studio, a group of artists and musicians. With the growing encroachment of the digital world into our lives, the artists aim to find a bridge between the classical and traditional and the futuristic and modern.

The Chitrali sitar plays itself; one can see the pegs pressing down on their own to follow a pre-programmed composition. The ancient instrument is thus involved in an experimental performance, perhaps to draw in a new generation. The idyllic vales of Chitral, which echo with fairy tales and folk stories often set to music, encounter the digital realm to create a new musical experience. 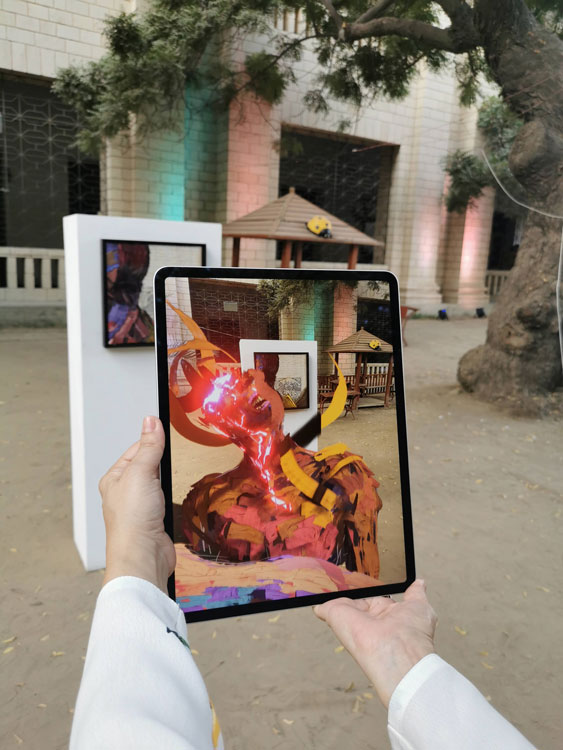 Perhaps the most striking of all the exhibits is the Simurgh app, which is the brainchild of German artist Dennis Rudolph.  The artist references the Simurgh, the mythical bird from Persian folklore, to lead viewers through an exciting virtual reality experience. Classical mythology is brought to life by technology as the app is used to scan ancient texts from Firdausi’s immortal Shahnameh, pages of which are displayed in the exhibit.

As the scan is completed, a Simurgh appears to guide users through the premises of the NJV school to certain markers where the real magic happens. The hovering Simurgh is replaced by towering figures seemingly rising from the earth. 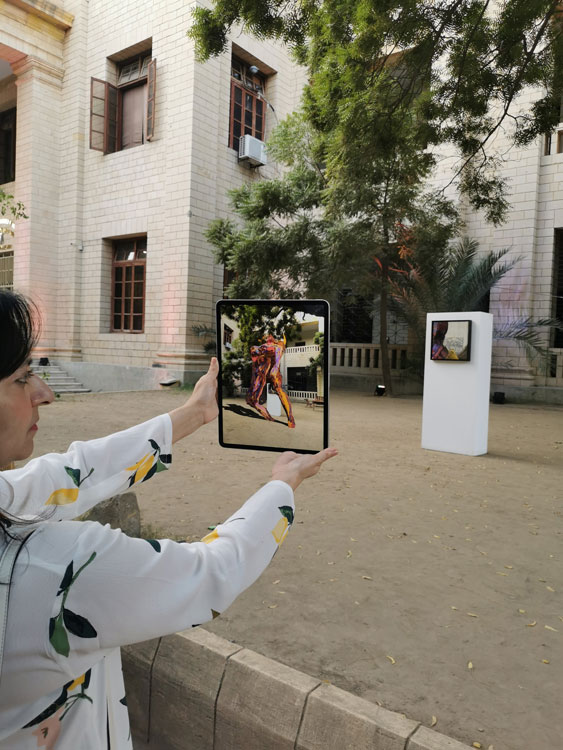 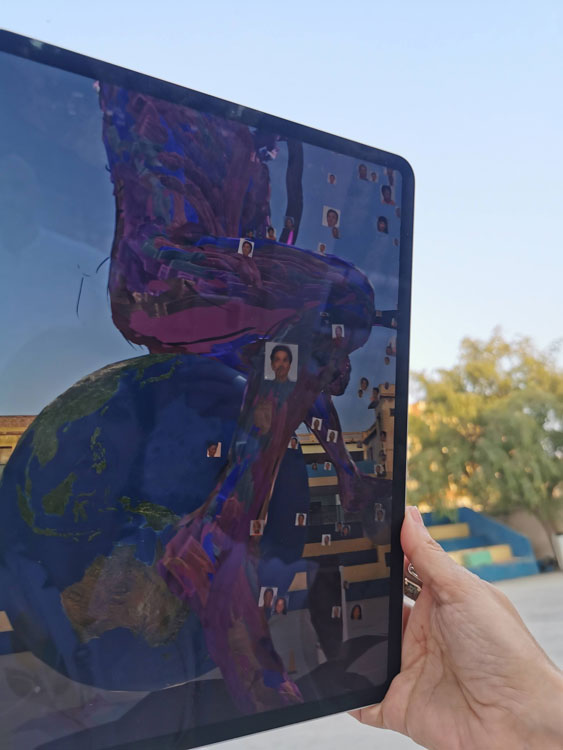 Moving from one marker to another, guided by the Simurgh, viewers are met by the tragic heroes Rustom and Sohrab and then Zahhak, the snake shouldered villain from Firdausi’s epic. The real and the imagined, the past and the present, the mundane and the fantastical all coalesce in this experience which is layered with music ranging from Pakistani film songs to arias by Wagner.

This was only a teaser of what the Karachi Biennale 2022 has to offer. It is a unique opportunity to experience the unusual, the thought provoking, the eye-opening … even the disturbing. To engage with art in public spaces outside gallery confines and without any pretension.

The Biennale runs from October 31st till November 13. For more details on the venues and exhibits visit www.karachibiennale.org