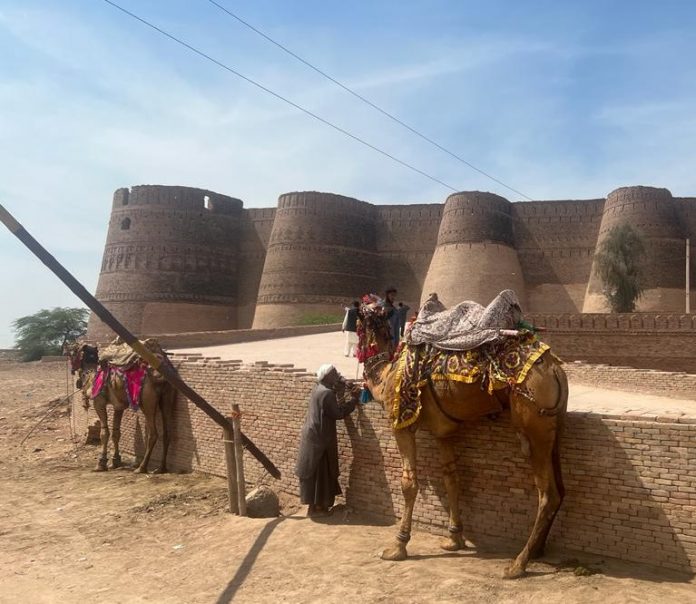 On a sunny and warm spring afternoon, we drove two hours from Bahawalpur to visit the grand ruins of the majestic Derawar Fort located in Ahmadpur Tehsil in Pakistan.

This awe-inspiring historic building has long been on my must-visit list, but somehow, I never managed to get to it on previous visits to the area. 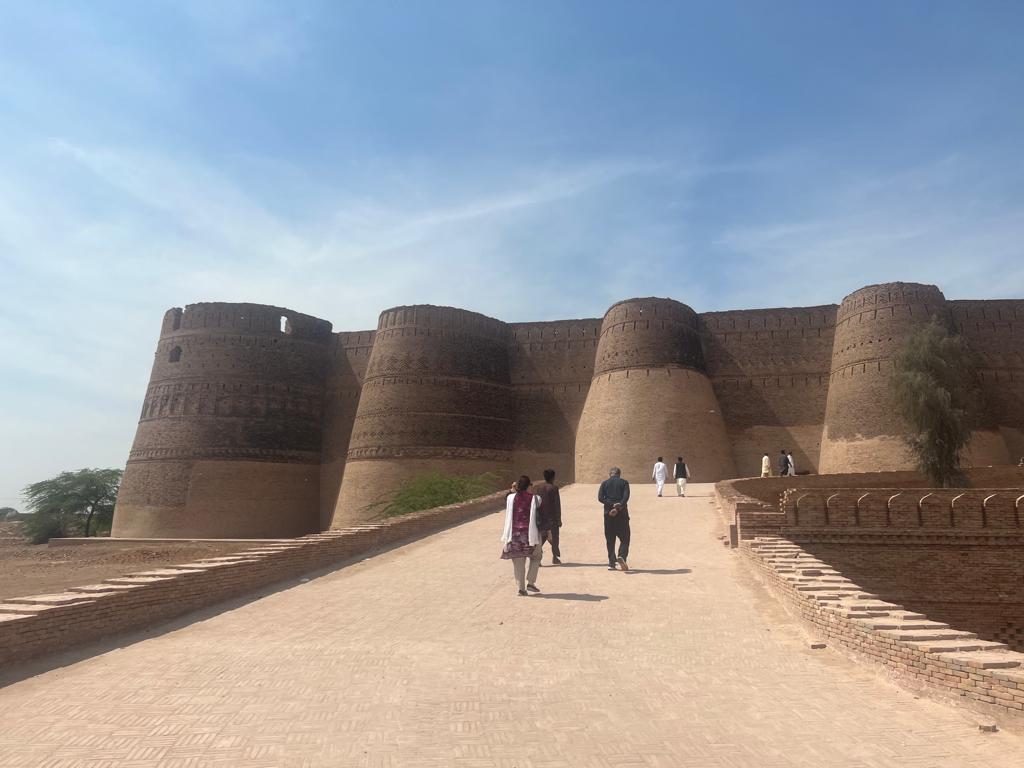 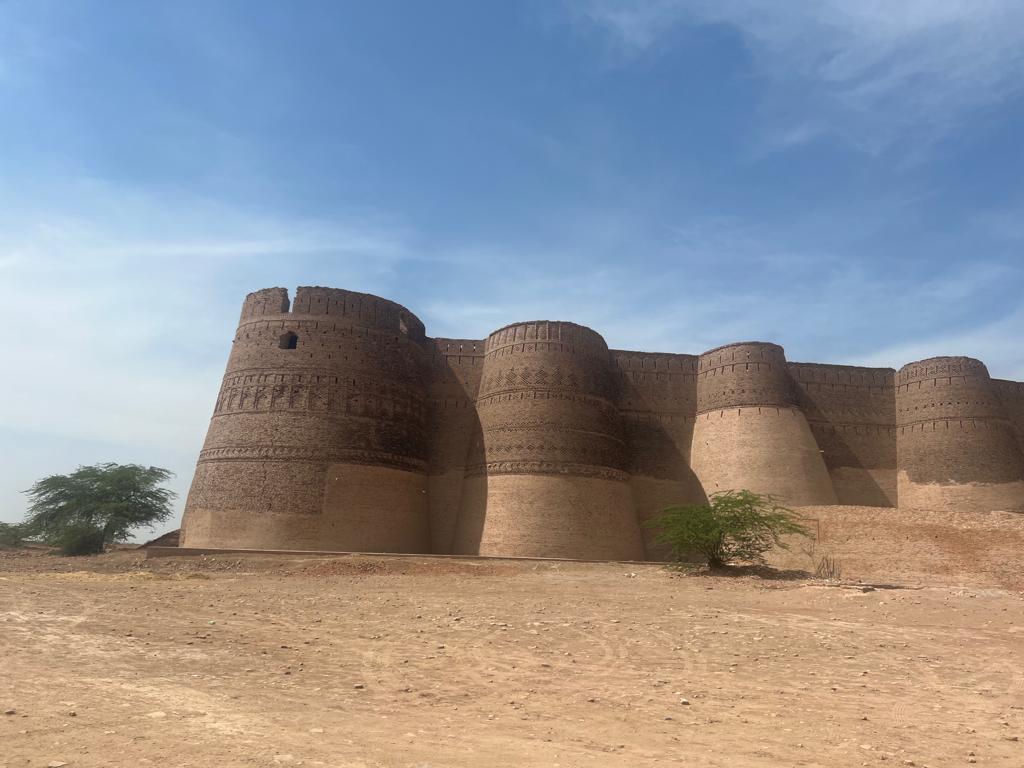 The fort forms a grand silhouette against the bright blue spring sky as you drive up. It appears less impressive when we get closer, a dusty track the only way to get to the winding driveway that leads to its gates. 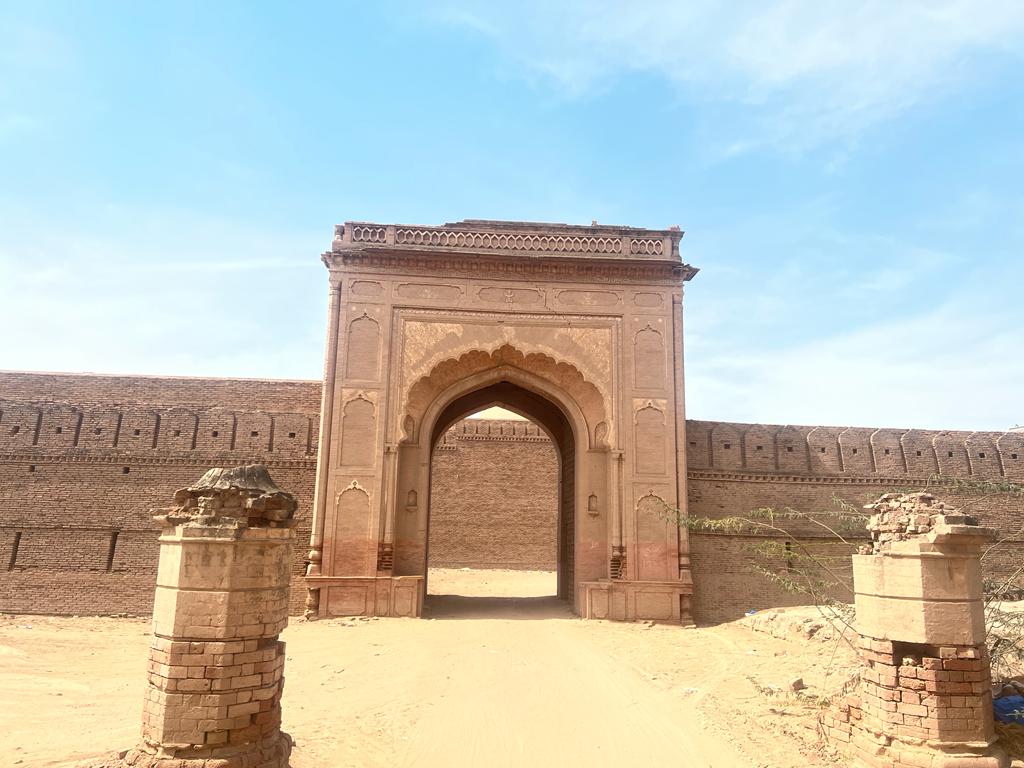 We pay Rs.50 each to the gatekeeper to let us in and walk in through a cool and darkened passage lined with ancient bricks. As we emerge blinking into the sun, we look around at a vast ruin, a largely empty shell of a building. We are stunned to see piles of bricks and an open ground filling the centre, with just a few dilapidated buildings left standing. 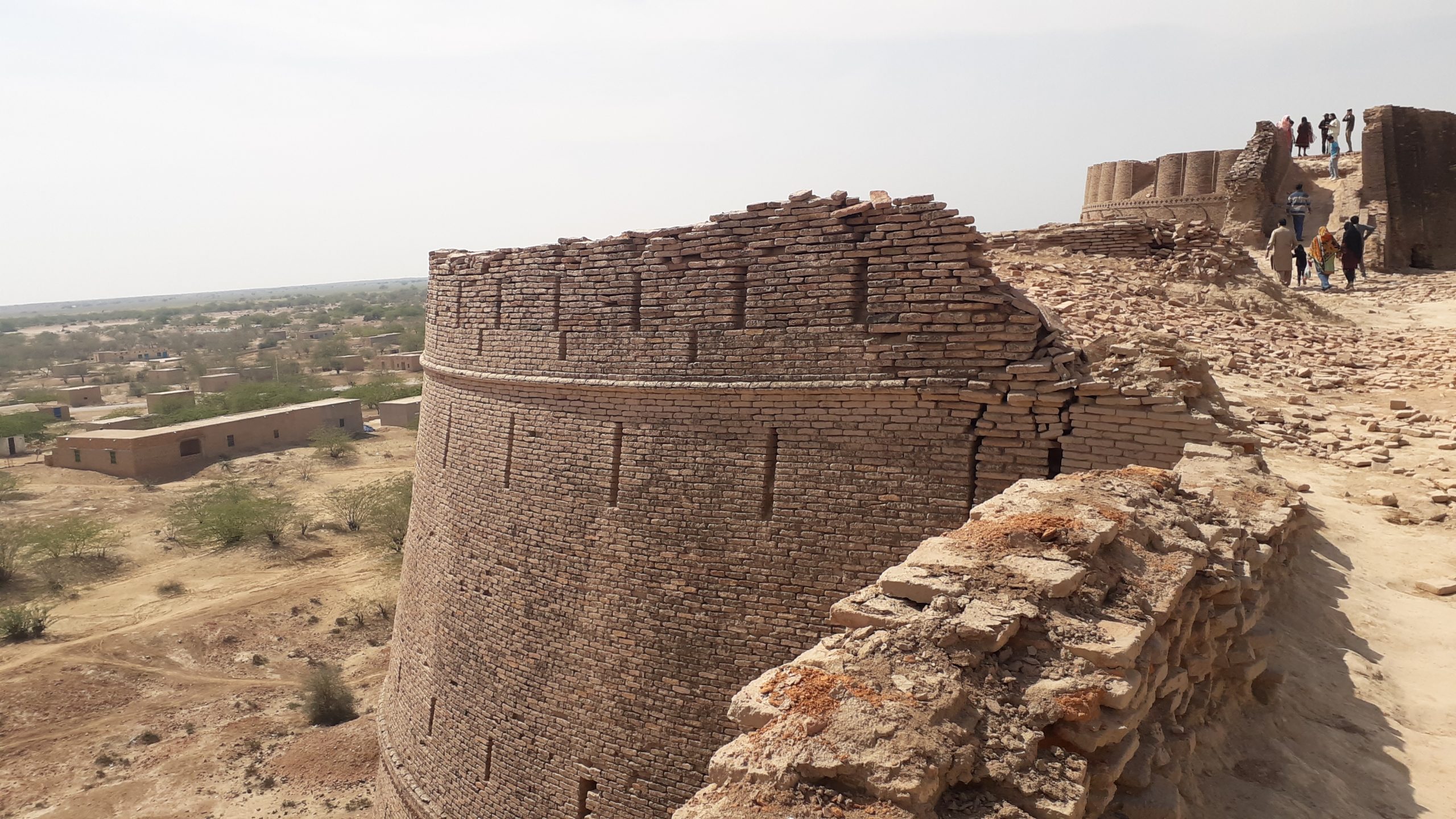 A guide wants to earn a quick buck and tell us about the history, but he knows very little. It’s better to google some information and learn more about the place. Derawar Fort is believed to have been built in the 9th century by a Rajput leader of the Bhatti clan in honour of King Rawal (the name later distorted to Rawer). After a varied history as a desert stronghold of Cholistan, it was taken over by Nawab Sadiq Muhammad Khan of Bahawalpur in 1733. It remained mainly within the Nawabs’ control till the 1970s. 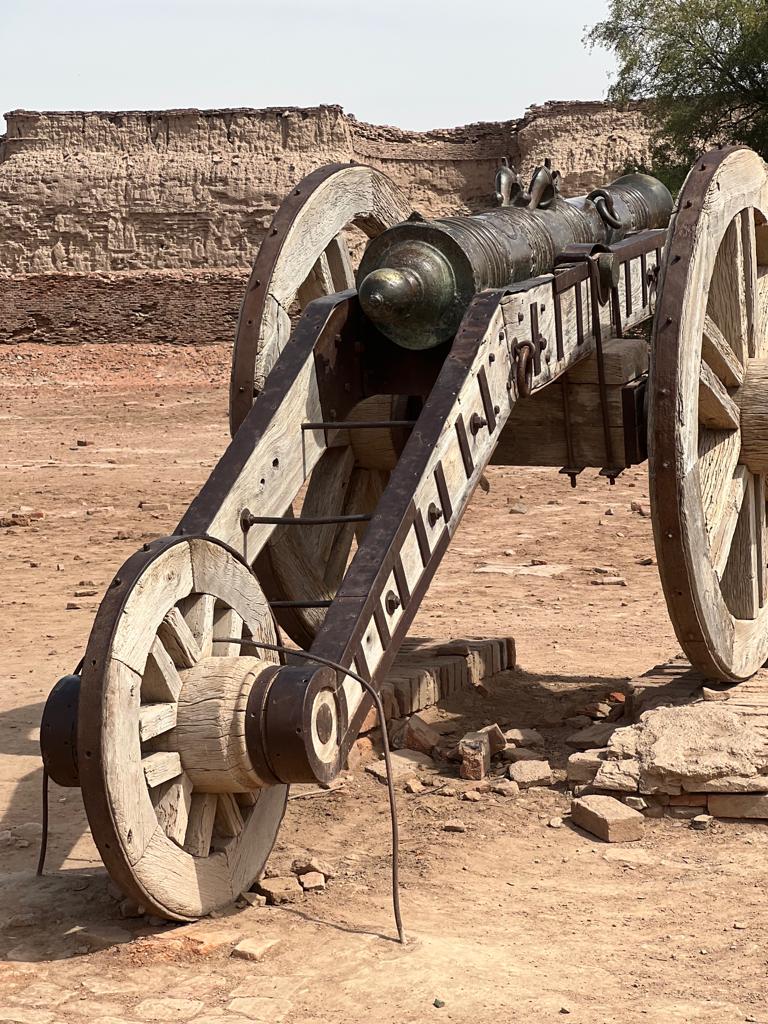 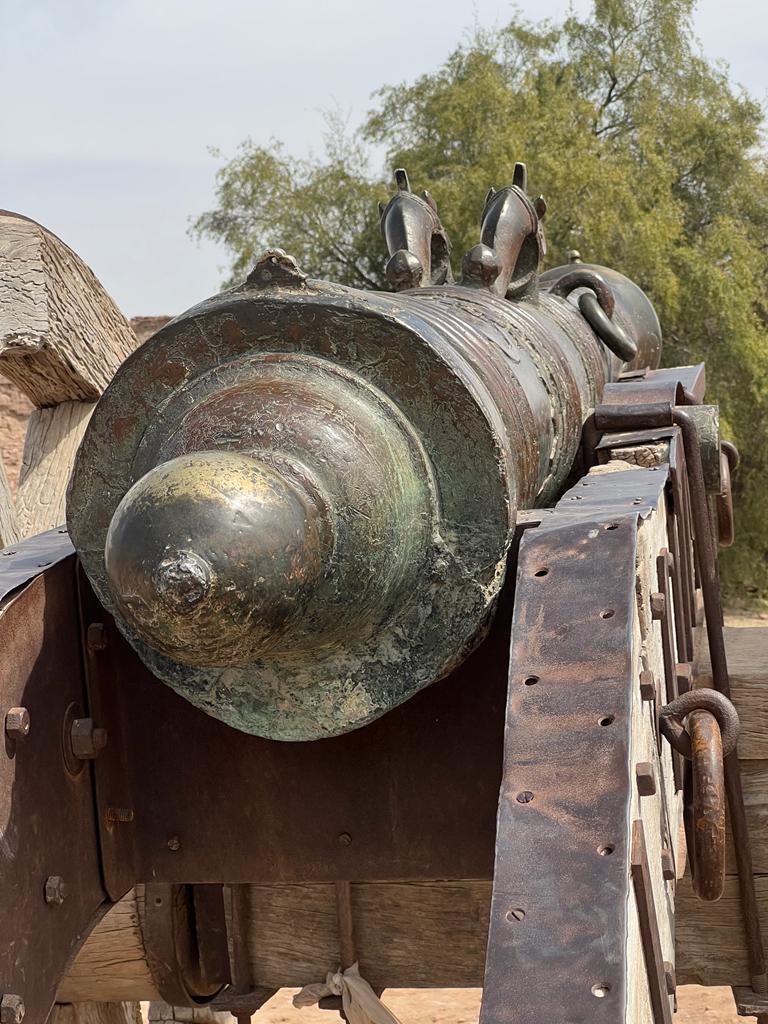 The fort built of bricks is famous for its 40 circular turrets and walls that are 1500 meters in length. Brick decorations mark each of the turrets and form a geometric pattern. The remains of a deep well inside the fort hint at a reason for its location; as a stopping point for desert caravans and travellers. A solitary cannon placed in the middle of the grounds reminds us of its militant past.

Only a few buildings remain intact inside the fort. The ruins of a Mehman Khana with elegant arches and some tile work are all that’s left of the residential complex. Here graffiti ruins what little is left to admire. 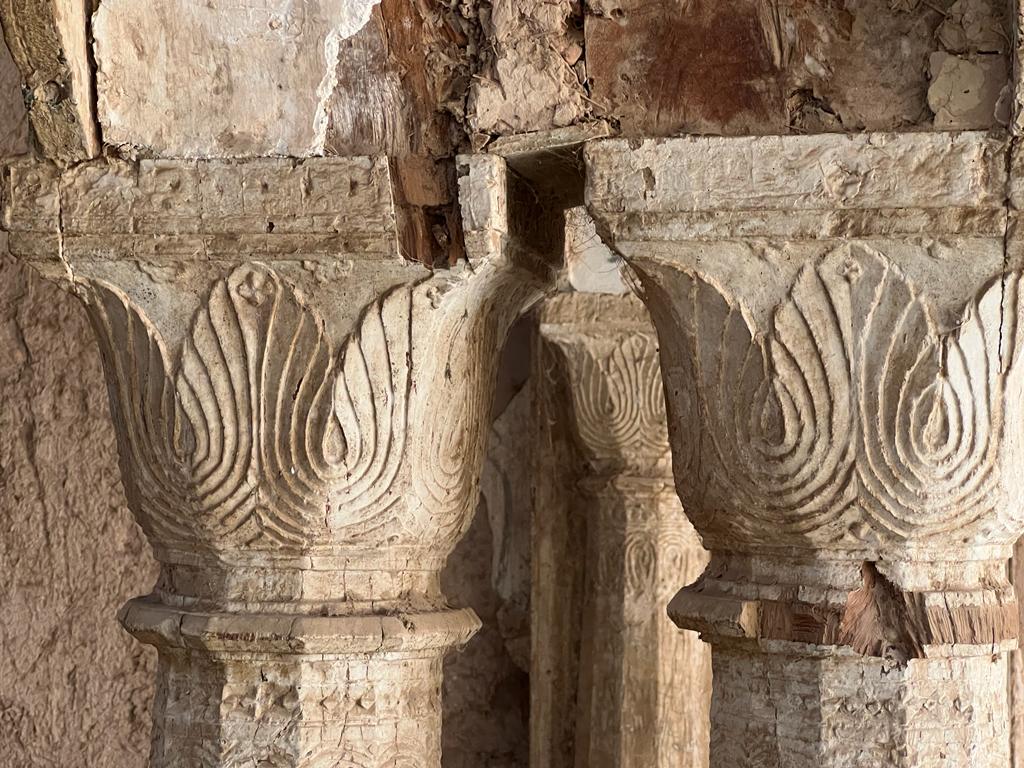 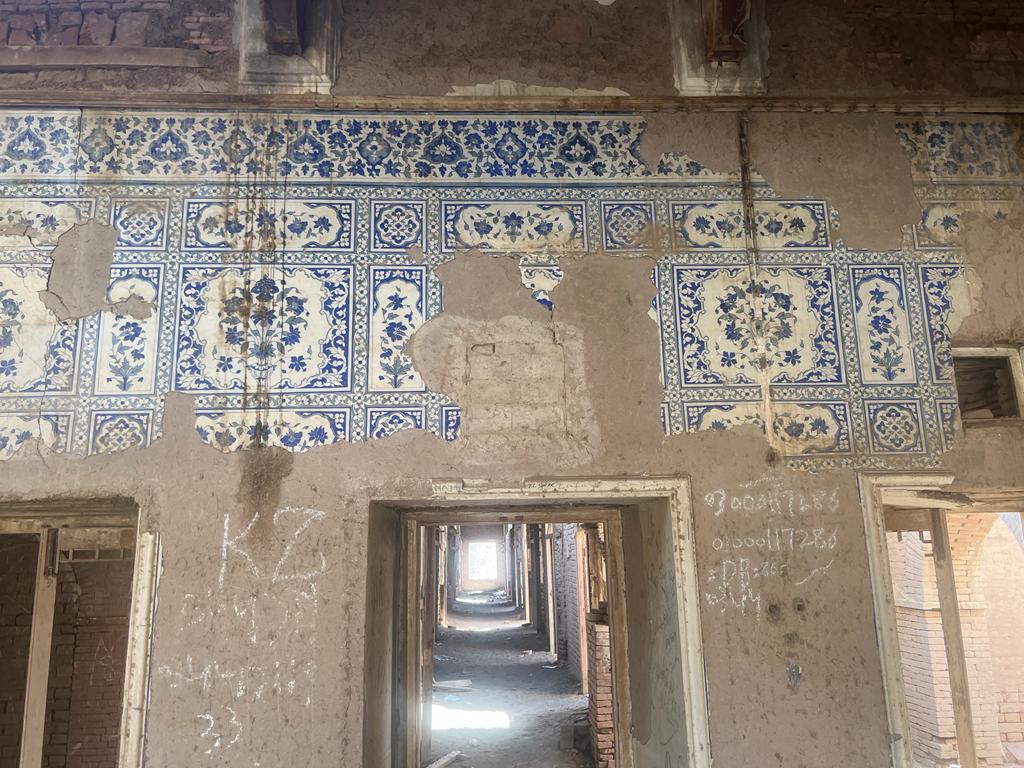 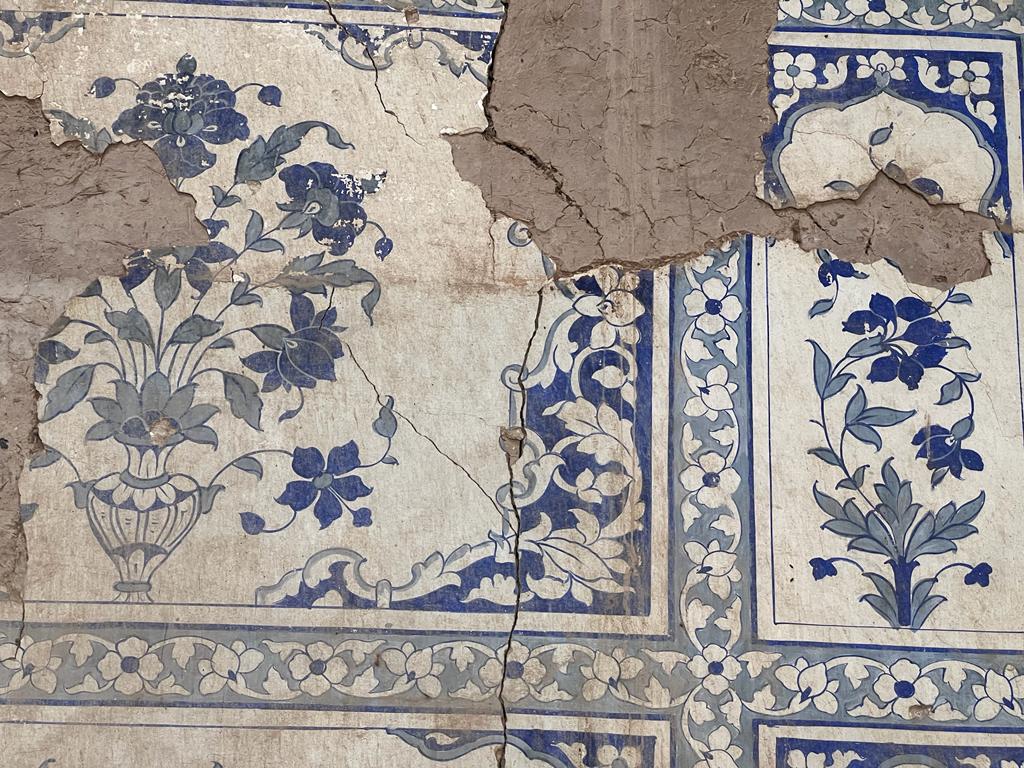 Some other buildings appear to be stables and dungeons underground, but we don’t descend to those because the path is somewhat risky. A steep climb over decaying bricks brings us to one of the turrets, where a city family conducts a photoshoot. 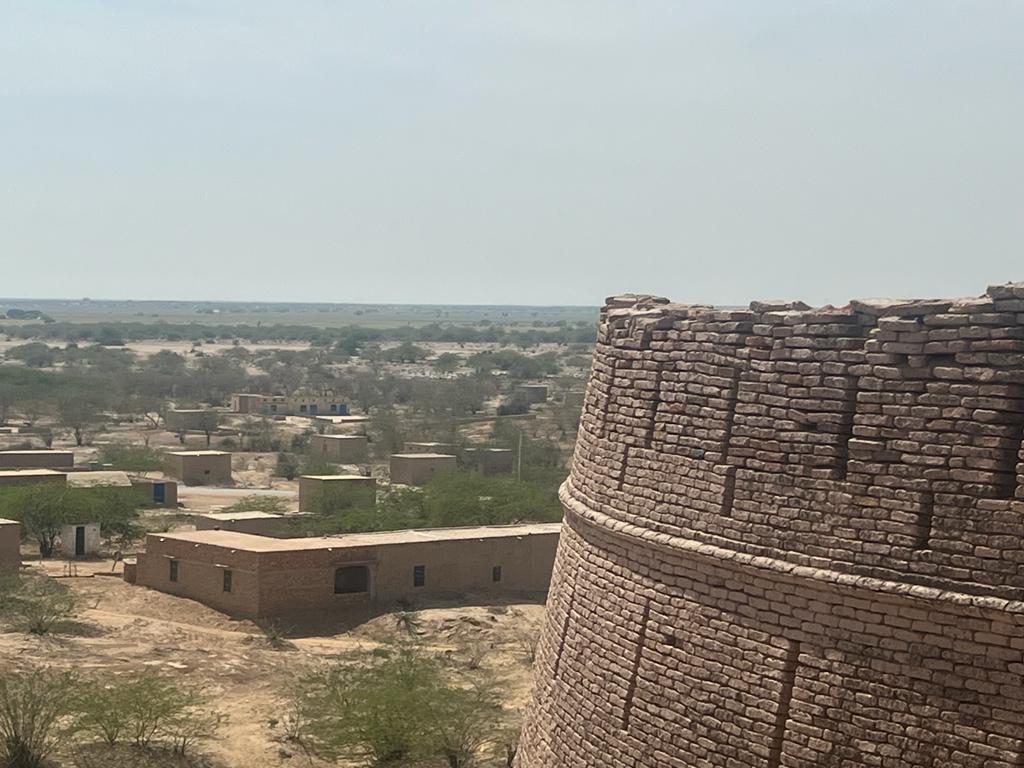 We look over the countryside and only see the desert’s vestiges because irrigation has turned most of it into agricultural land. A pearl white mosque next to the fort creates a pleasing contrast to the eye. 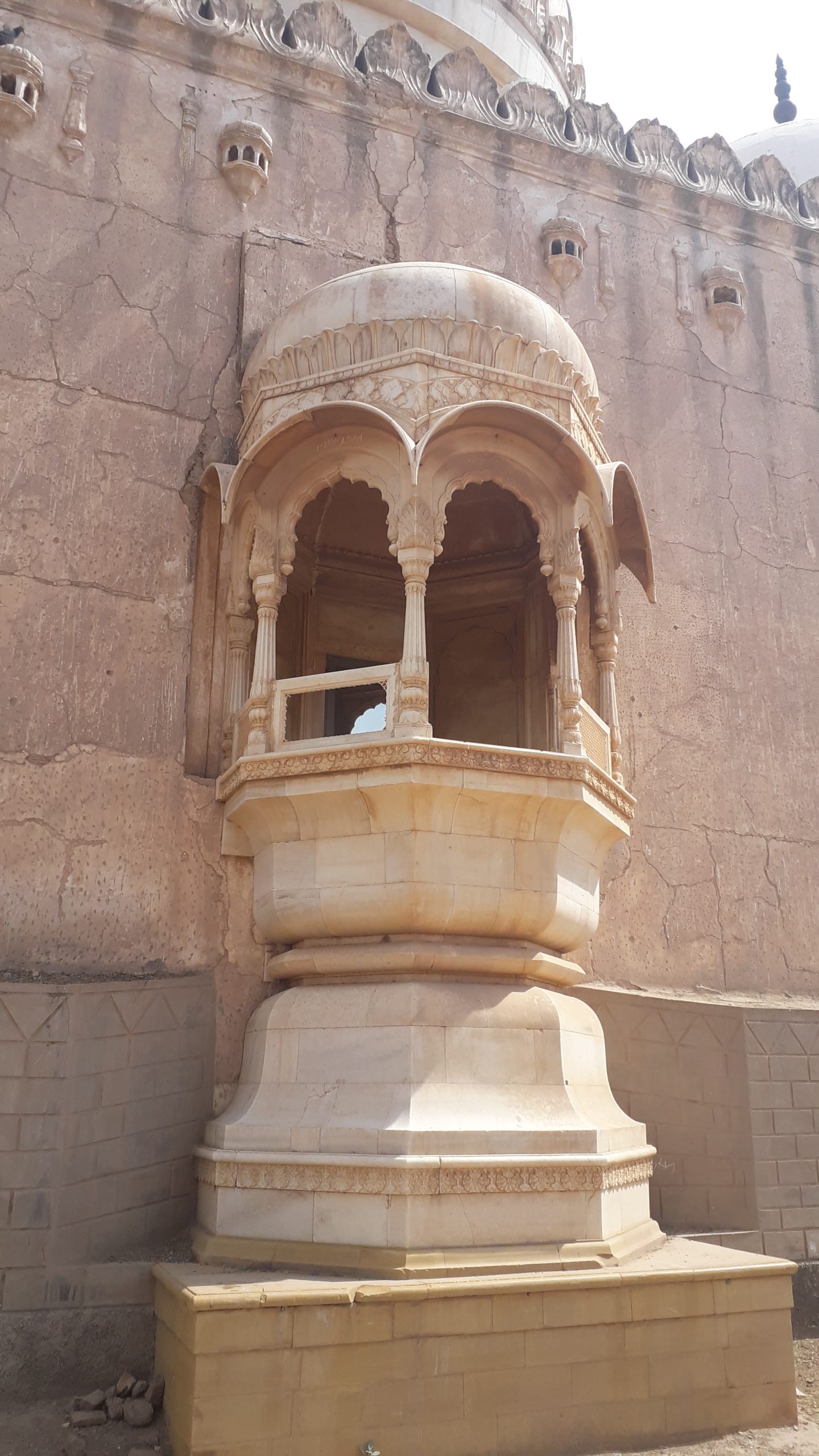 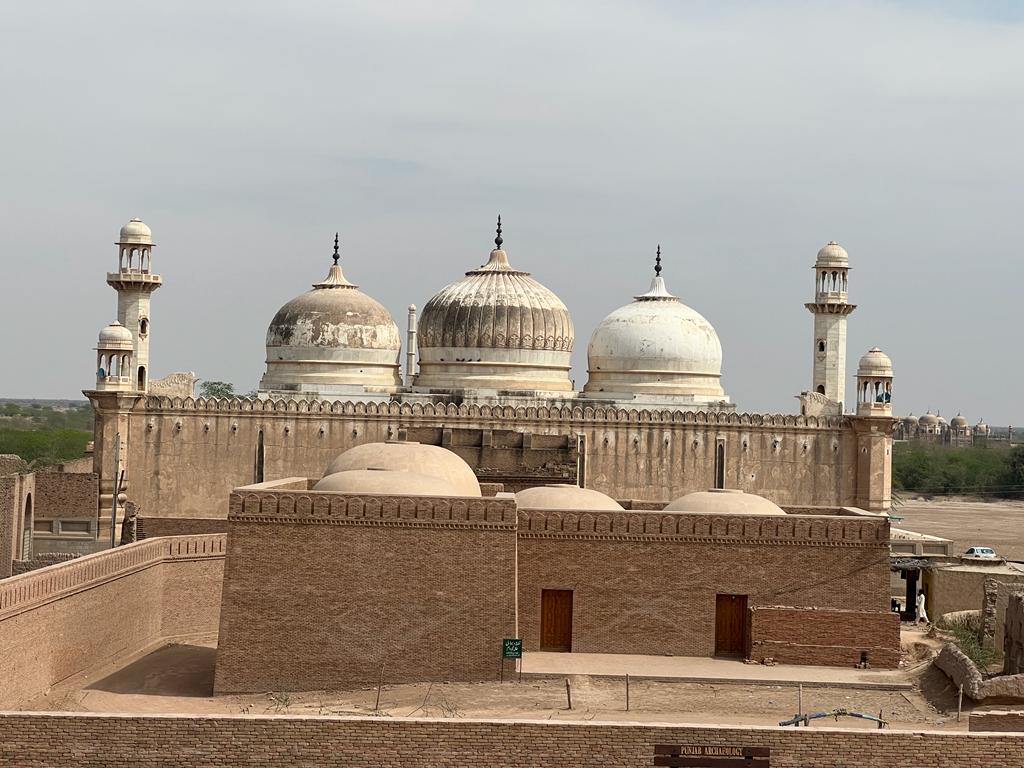 The whole fortress is in dire need of conservation, and though there were benches bearing the name of the Punjab Archaeology department, it was unclear what else they had contributed. 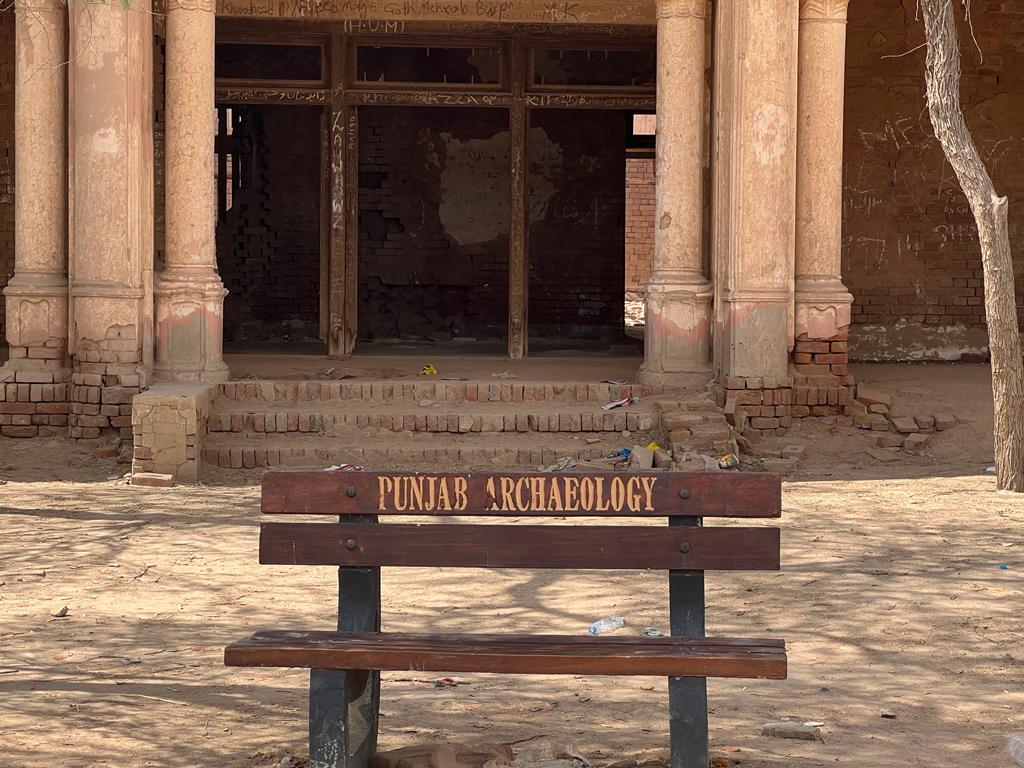 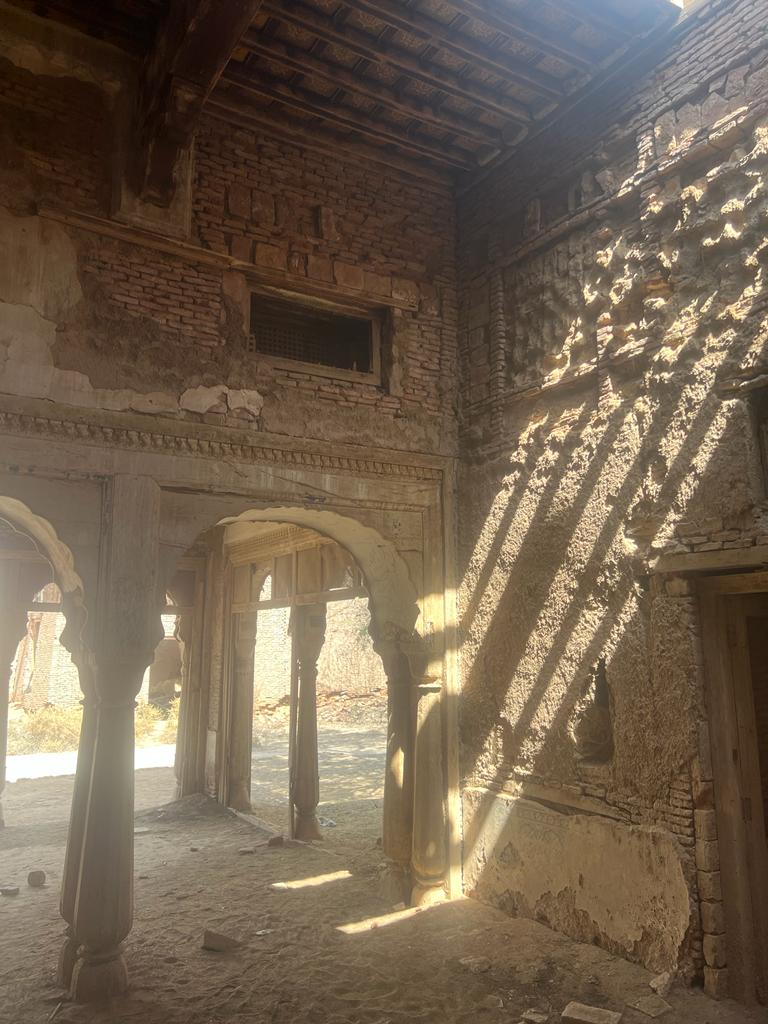 As a monument to the country’s historical past, there is a desperate need to preserve our priceless heritage. At the very least, some signboards with relevant facts about Derawar Fort and its historical significance for Pakistan. The fort was thronged with tourists, so why not charge them a bit more and use that to contribute to the building’s upkeep?

If we don’t act soon, it may be too late to preserve our past that is disintegrating into dust in front of our eyes.

Zahra Chughtai - February 8, 2023 0
Welcome to the second part of our series in collaboration with the Maria Memon Edit. This time we bring a home foyer to life...