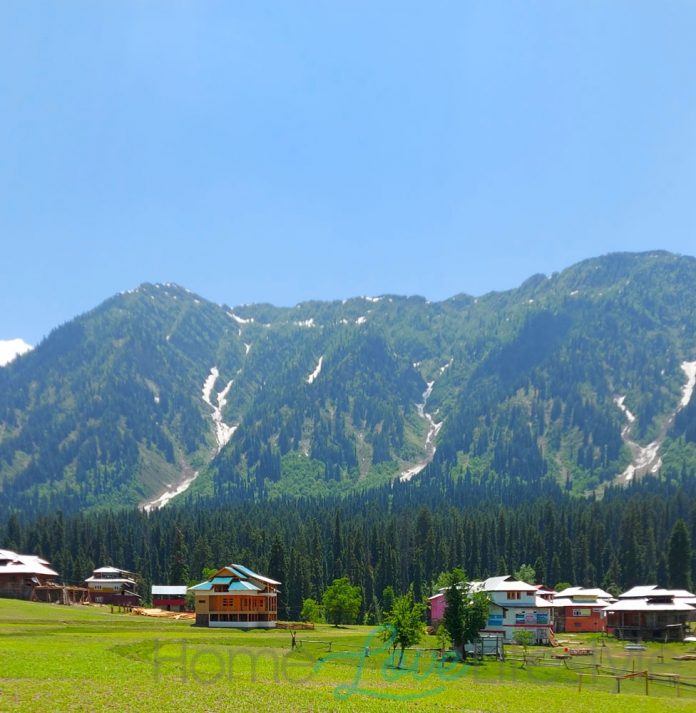 It’s summer and as the plains of Pakistan sizzle, frazzled urbanites head to the mountains to rejuvenate. Our reader Shazain Masood and a group of friends decided to escape into the beautiful Kashmir Valley to refresh body and spirit. The group flew from Karachi to Islamabad where they spent a night. The next morning  a hired van drove them to the Kashmir Valley. HomeLoveLifestyle caught up with Shazain and got all the details of the trip. 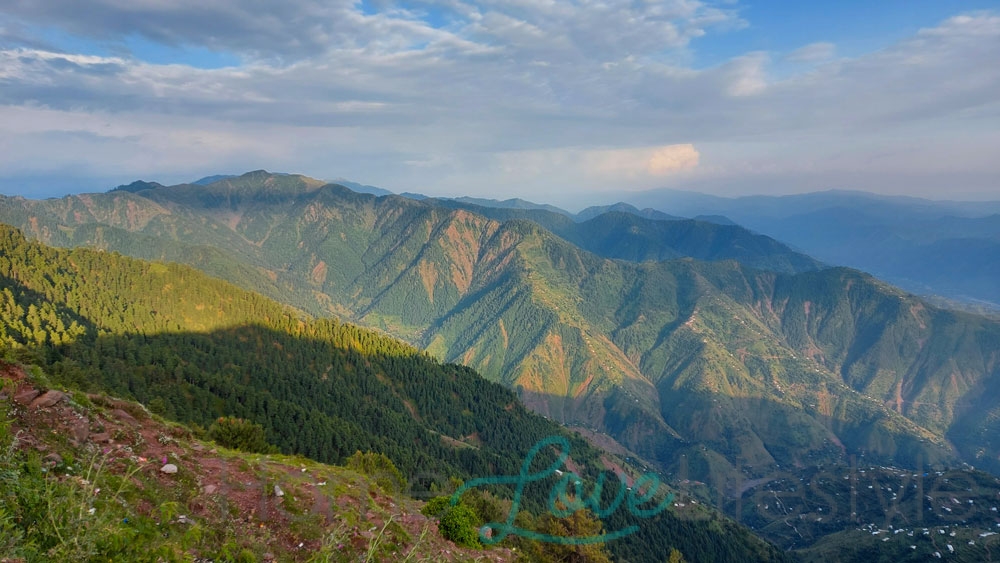 Describe the journey from Islamabad to the Kashmir Valley?

We set off from Islamabad for Keran in the Neelam Valley. A trip that should have taken us 7 to 8 hours ended up taking over 10 hours. As soon as we entered Kashmir we ran into a huge PTI rally. The road is really narrow so there was no way to overtake them and get ahead. So that really slowed us down. We finally reached Keran at night. Thankfully our accommodations were very nice. It was a new place with clean rooms and good desi food. However, there is no wifi or TV. 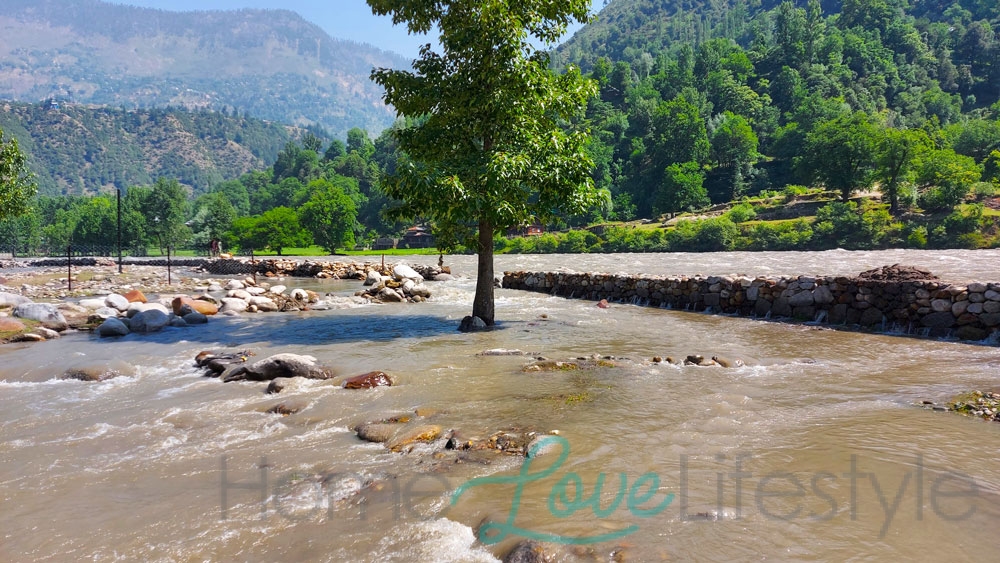 But that’s ok when in the mountains isn’t it? 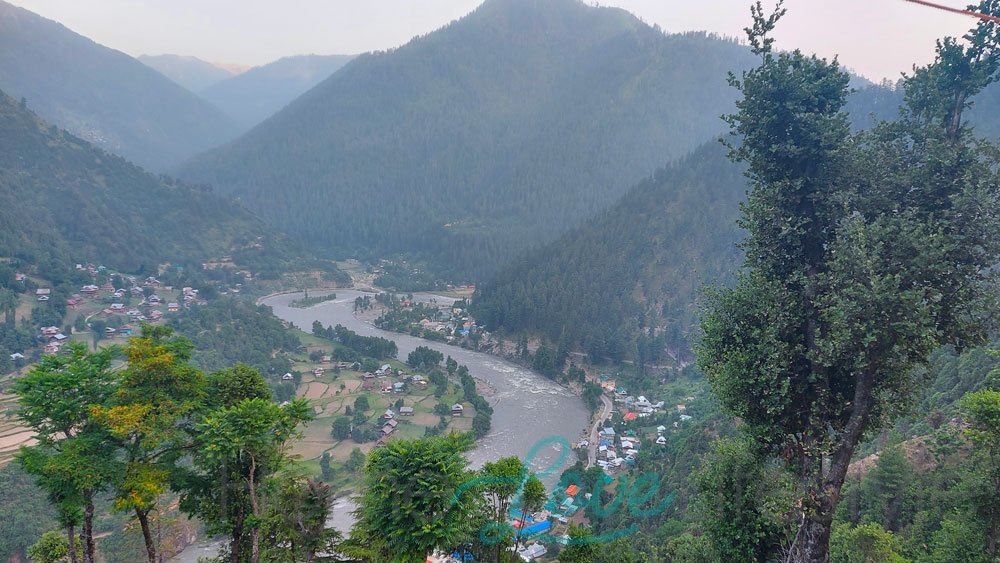 The next day, we drove around the beautiful Neelam Valley and then unto upper Neelam valley. From here we could see the whole valley spread out below. We made friends with some of the locals and spent the evening chatting with an old lady, her son and small grand-daughter. The old lady was very affectionate with my friend and her daughter. The locals are all very welcoming and friendly. In fact, people kept calling out to us, inviting us to share a meal. The children would run along with us and keep chatting.

Then it was onwards? 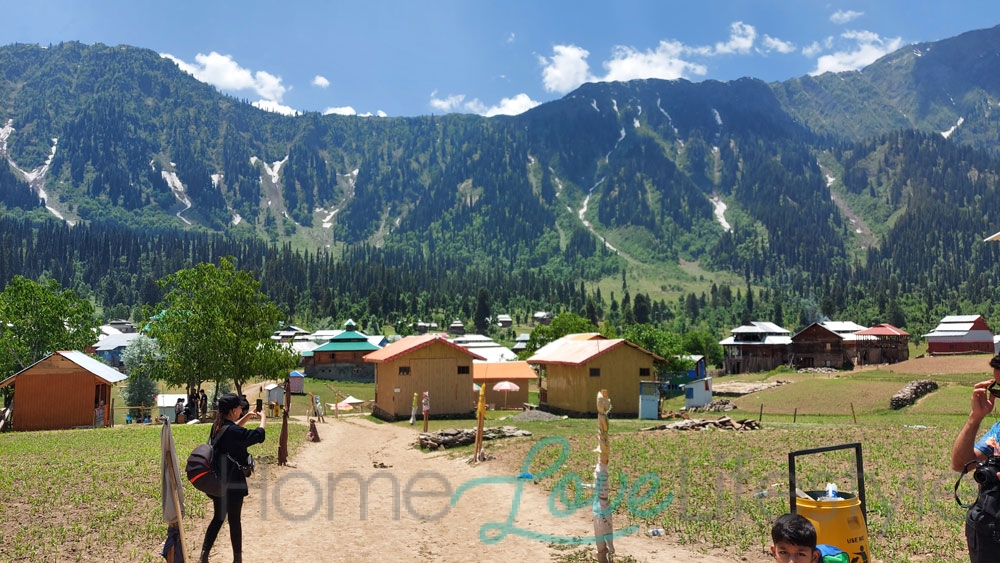 After two nights at Keran we left for Kel and Sharda. Our hotel was between the two towns and in quite a remote spot. We had to cross a stream to go there and when the water is high, cars can’t make it. Luckily we managed it. The hotel here was not as nice as the one in Keran. But the view from our balcony was incredible! It’s difficult to put it into words….the river running against the backdrop of lush green mountains, waterfalls spouting from the mountainsides and falling into the river below, meandering streams… 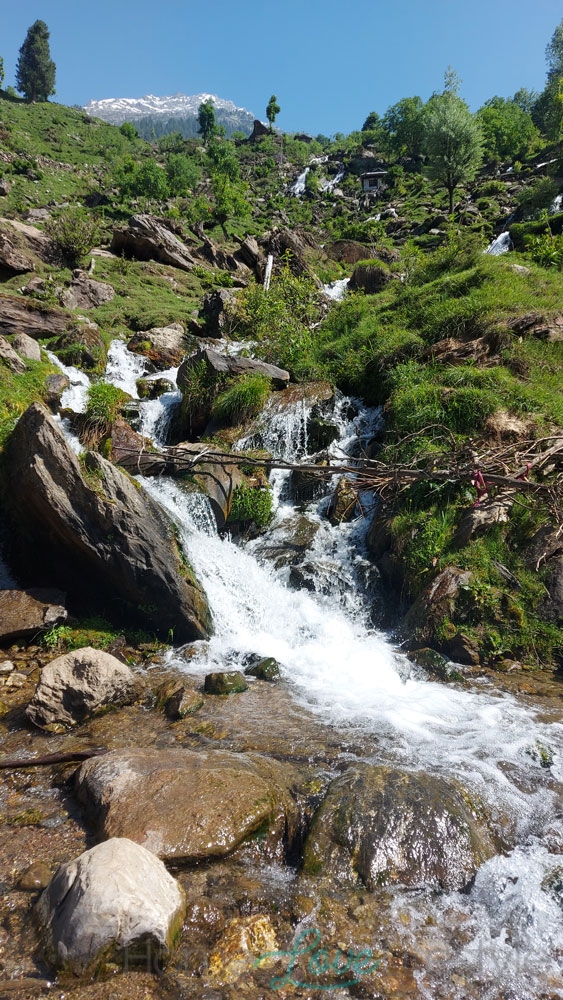 The valley is full of herds of goat and sheep everywhere, literally hundreds of them.We took a walk at night and while most of the animals were sleeping, even the ones which were awake were standing absolutely still. They wouldn’t move at all. It was quite amazing to see.

Did you do any hiking?

The next day took a jeep to Kel since the access here is difficult and roads tricky. Kel is a village and we  took chairlift here operated by the Pakistan army. We got off and then hiked uphill for some 30 mins to get to Arang Kel. We were given hiking sticks for what turned out be quite a strenuous hike. In fact, only two of our group, including me, made it up there. The sene that awaited us at the top struck me speechless! Lush meadows  surrounded by mountains and small streams flowing, it looked like a picture out of a fairytale. Little bridges run over some of the streams and there are some wooden huts here for people to take a break. 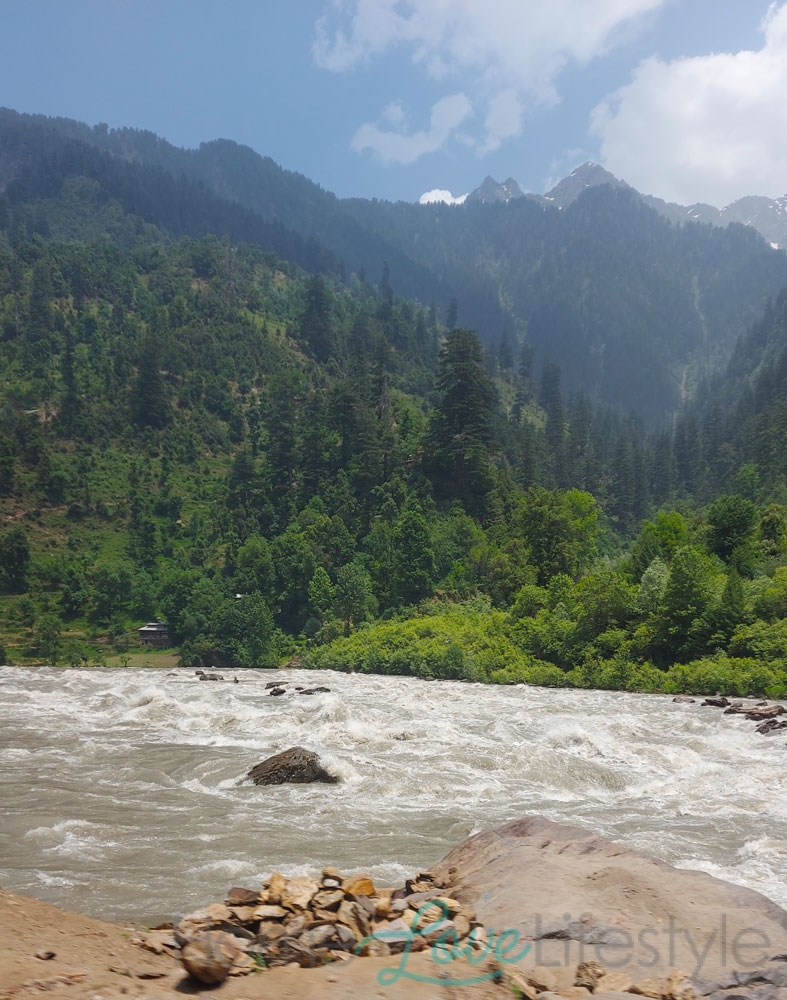 The hike down was more stressful for me than climbing up since you have to stop yourself from slipping down. Back at the hotel we just chilled on the balcony with tea, pakoras and French fries.

Then it was Muzaffrabad next?

We decided to get an early start the next day for Muzzafarabad to beat the traffic. So we headed out at 4 am and made it to Muzzafarabad by 11 am. We stayed at the very nice Neelam View Hotel. Here we also got to sample some traditional Kashmiri food, in the hotel and in the town. I really liked the kofta in yoghurt curry and Kashmiri karhai. 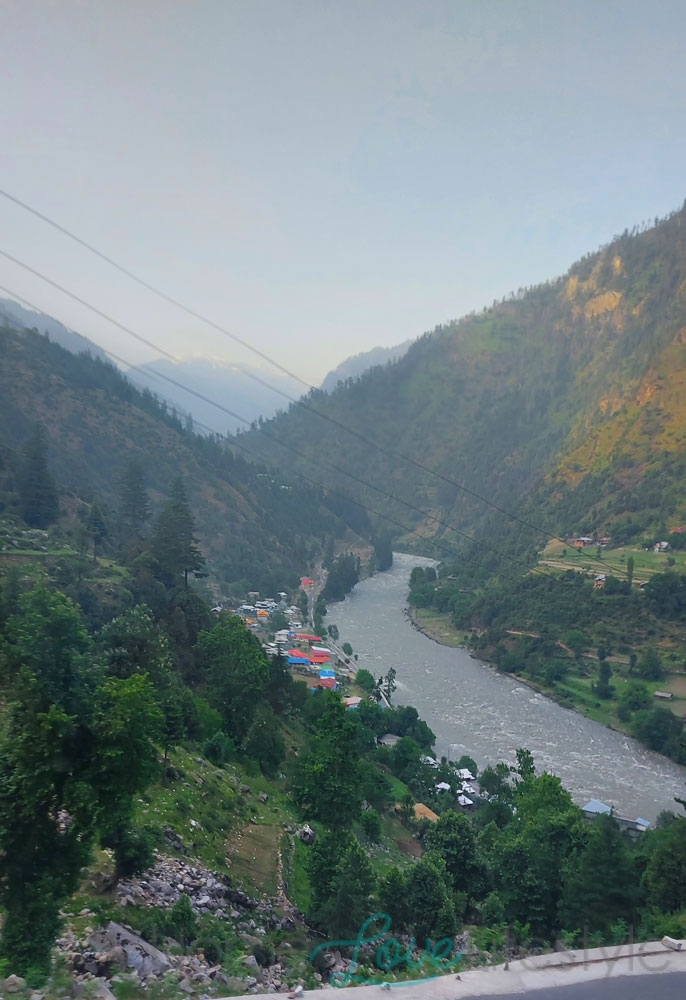 In the evening, we headed to Pir Chinasi which is at a height of 9500 feet. We basically drove up a mountain and it was appreciably colder once we got up there. The view was once again incredible, both green and snow-capped mountains ringing green meadows. There’s also a small temple here but I didn’t explore it. 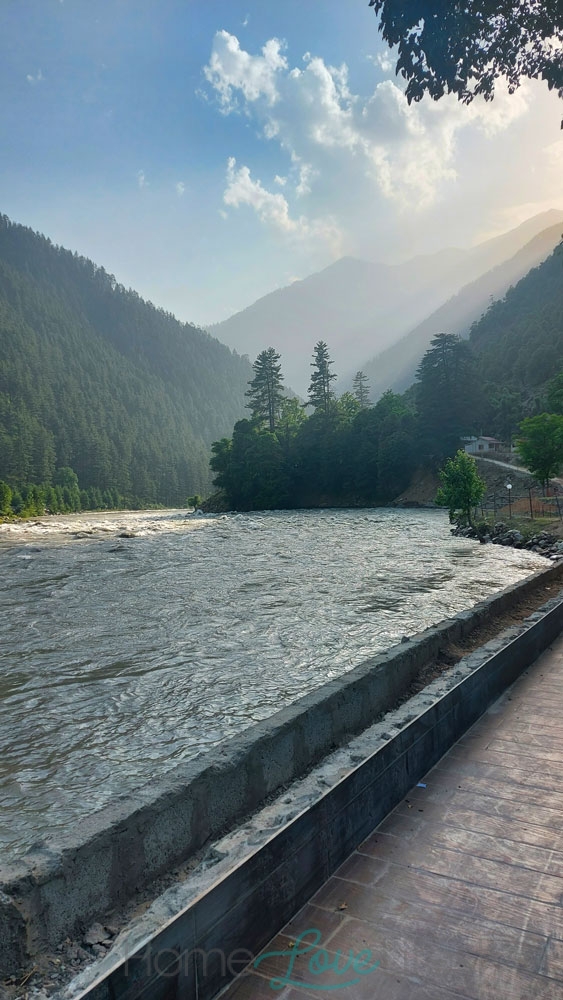 The next day headed back to Islamabad to catch a flight back to Karachi the same day. We had to take a detour when we entered KP because there had been landslide, which we luckily missed. But we had given ourselves enough time and made it on time for our flight. It’s a good idea to account for the unexpected when travelling.

The weather was actually quite hot since the Neelam Valley is not very high. But the evenings are cool. 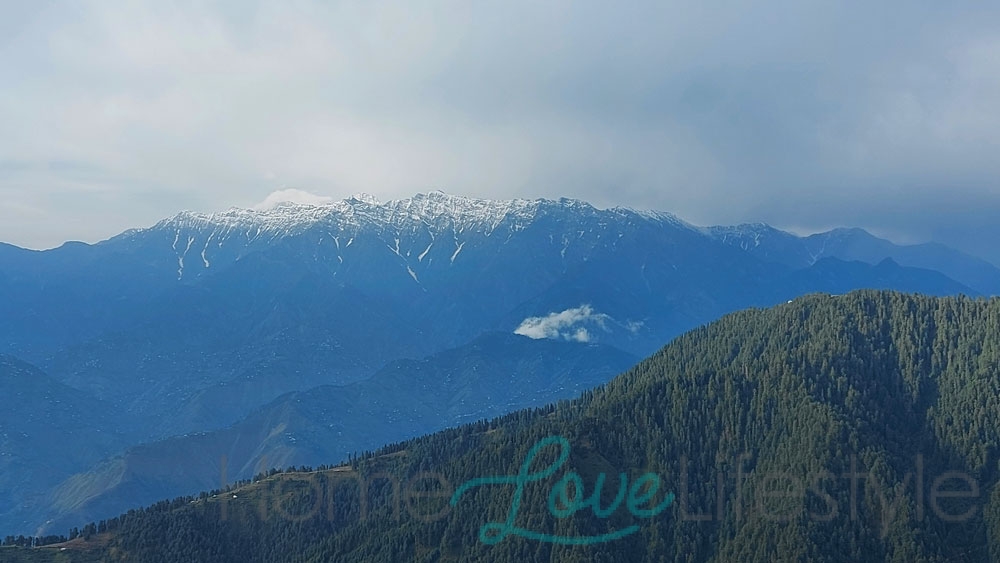 Leaving my ID card at the chairlift and recovering it, our car narrowly missing a huge boulder rolling down the hillside… definitely very adventurous.

But another incident I will never forget was in the town of Keran.  I had to use the washroom near a Dhaba where we were eating. I went around to the back where there were people sitting around, horses tied and a stream flowing. I went into the toilet and closed the door only to find an enormous lizard right next to the commode! I don’t like lizards anyway but this was an absolute monster. I have never seen anything like it. I started freaking out and so did the creature which was as panicked as me! It almost landed on my foot before finally slipping out. That left me the most shaken.

What was the highlight of the trip?

The best part of the trip was the incredible beauty of Neelam Valley and Arang Kel. The grass is such a vivid green, then the snow-capped mountains, rivers, waterfalls…Even the wooden houses add such a picturesque touch. Words are insufficient and even pictures don’t do it justice.