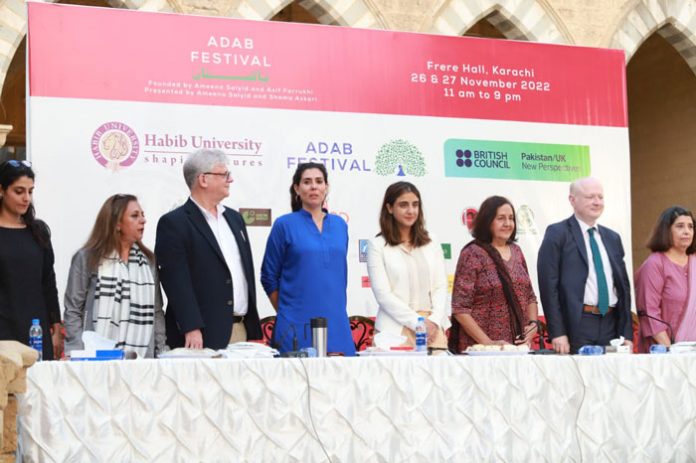 The fourth Adab Festival will be held on 26 and 27 November 2022 from 1130 am to 9 pm at Frere Hall, Karachi. scroll down for the detailed programme.

Ameena Saiyid spoke to the assembled saying, “The theme of the Adab Festival this year is the climate crisis. Adab Festival is a new Silk Route through which our traditions and culture, literature, the arts and their luscious fruits can travel and enter the hearts of people in every part of Pakistan and the world. Through Adab Festival, which is free and open for all, we want everyone in the community to love, experience and enjoy literature. The Adab Festival belongs to Karachi and our community which is why we are having it in an open public space.” 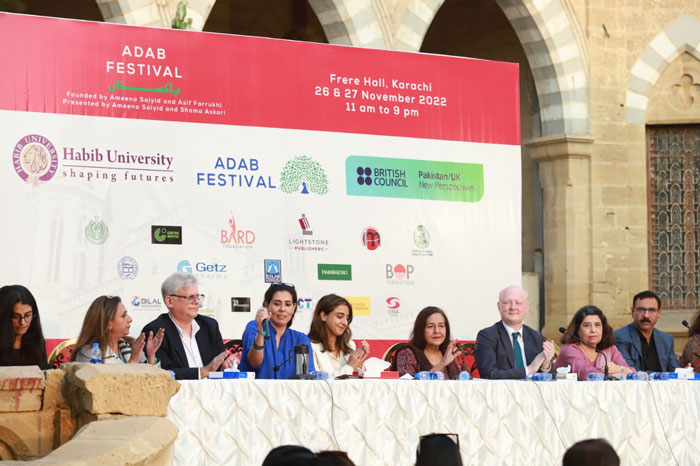 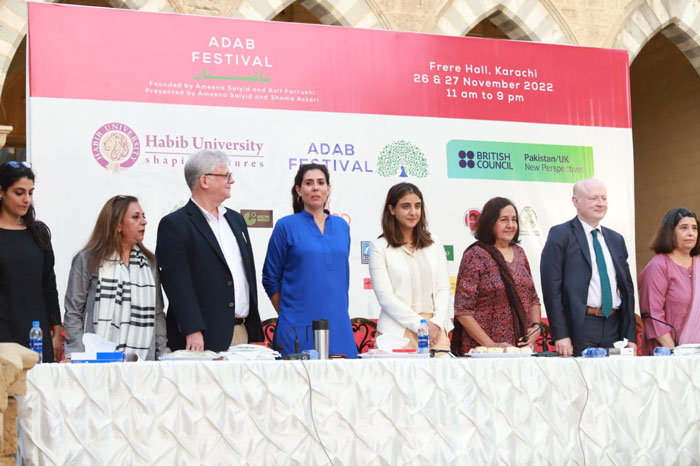 Maarya Rehman, Deputy Director, British Council, said, “We know that Pakistan is at the very cusp of the climate crisis, and its large youth population must be part of the long-termsolution for tackling this global challenge. At the British Council, we have brought underrepresented voices – especially those most a ected by climate change – into the conversation, for example, by ensuring women and marginalised groups can participate in climate research and grant opportunities. ”

Wasif Rizvi, President Habib University, said, “Pakistan will soon be unliveable for humans. Extreme weather events – disastrous rains, lethal  oods, devastating droughts and heatwaves – have made such unimaginable catastrophe a lived reality for the people of Pakistan. Change in Pakistan will likely have increasingly terrible impacts on food security and water scarcity. Despite this existential threat.”

‘The Lost Lullaby of Mother Nature’ art show by Fauzia Minallah curated by Pomme Amina Gohar. Ground- breaking books will be launched such 1946, The Last War of Independence. The Royal Indian Navy Mutiny, a collection of short stories and unpublished photographs from the Second World War by M H Askari and more.

There will be a separate section for children to draw them to reading through storytelling, music, performances, and art. Adab Festival will introduce new, innovative, creative approaches to promoting books, reading, authors, raising awareness of climate change by entertaining and engaging the audience through presentations, dramatic readings, debate, comedy, music, song, art and dance.

11.35 am: Welcome by Ameena Saiyid and Shama Askari